Who is Katherine Johnson and Why Did the President Namecheck Her as a Tech Pioneer? 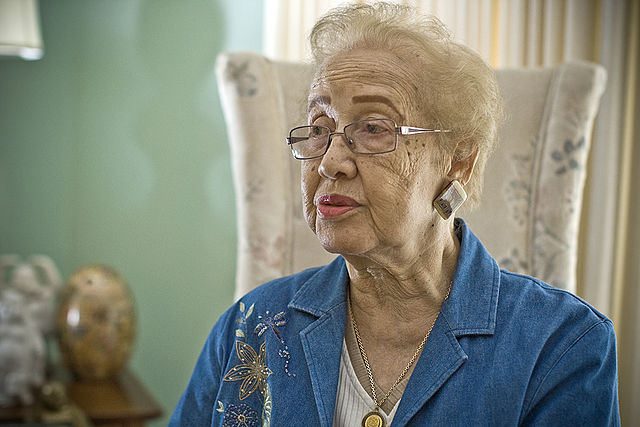 In his State of the Union speech on last Tuesday, U.S. President Barack Obama devoted a lot of attention to technology and even namechecked a pioneer that most technophiles are not even familiar with: Katherine Johnson.

Stating that the “spirit of discovery is in our DNA,” President Obama said. “[W]e’re Grace Hopper and Katherine Johnson and Sally Ride. We’re every immigrant and entrepreneur from Boston to Austin to Silicon Valley racing to shape a better world.”

The President namechecked a number of U.S. technology and science pioneers: Most people know Sally Ride (the first American woman to go into space) and they probably know Grace Hopper (an early computer pioneer who coined the term ‘computer bug’), but Katherine Johnson? A mystery to many.

An African American mathematician and physicist, Johnson worked at key scientific and engineering positions of what would become the National Aeronautics and Space Administration (NASA), Johnson helped solved the challenging problems of interplanetary trajectories, the orbits of spacecraft, and space navigation, before computers were widely used, or trusted.

An article on NASA’s website describes her job: “She did the math.”

She started back when NASA was still called the National Advisory Committee for Aeronautics when organizations would hire women to perform calculations by hand (referred to as a time when “computers” wore skirts). Her job at  included calculating gust alleviation for aircraft. 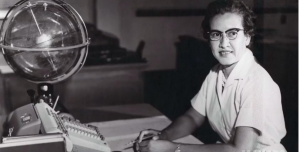 Katherine Johnson sits at her desk with a globe, or “Celestial Training Device.” credit: NASA

As a U.S. African American woman working in the 1950s, she certainly faced the racial and gender barriers. But her skills in analytic geometry were so solid, she became one of NASA’s most trusted space scientists.

She calculated the trajectory of Alan Shepherd’s 1961 space trip. Her reputation was so strong that John Glenn asked her to recheck the calculations made by the new electronic computers before the mission on which he became the first American to orbit the Earth.

“The early trajectory was a parabola, and it was easy to predict where it would be at any point,” Johnson explained. “Early on, when they said they wanted the capsule to come down at a certain place, they were trying to compute when it should start. I said, ‘Let me do it. You tell me when you want it and where you want it to land, and I’ll do it backwards and tell you when to take off.’ That was my forte.”

“We wrote our own textbook because there was no other text about space,” she said. “We just started from what we knew. We had to go back to geometry and figure all of this stuff out. Inasmuch as I was in at the beginning, I was one of those lucky people.” 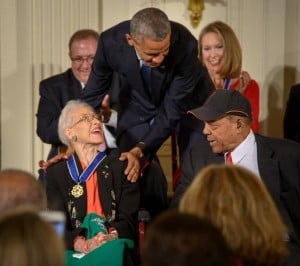 She is also a recipient of the Presidential Medal of Freedom, presented in November 2015.

“The reach of Katherine Johnson’s leadership and impact extends from classrooms across America all the way to the moon,” said NASA Deputy Administrator Dava Newman, during the presentation ceremony (you may have missed this between Yogi Berra, Gloria Estefan, and Stephen Spielberg).

“Katherine … provid[ed] the foundation that will someday allow NASA to send our astronauts to Mars. She literally wrote the textbook on rocket science.”

But why the Medal of Freedom and the STOU shoutout?

President Obama has been very active in promoting women in STEM (Science, Technology, Engineering, and Mathematics) throughout his presidency, gathering their stories on the White House website.

“Katherine,” Newman continued, “has chosen to take a leading role in encouraging young people to pursue education in the STEM disciplines of science, technology, engineering, and math.”

Perhaps the notable mention of STEM women was not only an encouragement to women in technology and science but a quiet shoutout to his daughters, one of whom enters college this fall.