Kathleen Booth, who died on Sept. 29, filled her years with fruitful research, meaningful innovation, inspiring encounters — and involvement with several of the 20th century's major technological milestones.
Nov 6th, 2022 6:00am by David Cassel 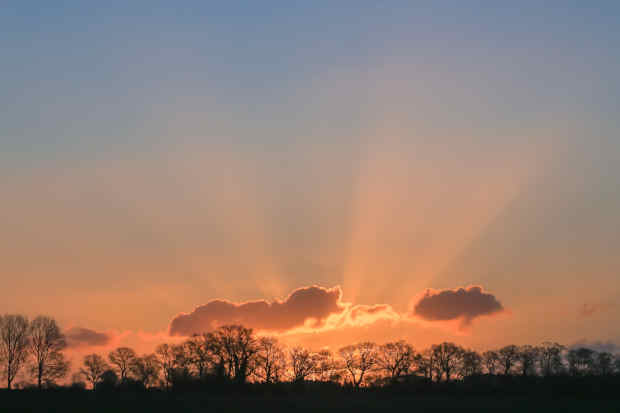 Kathleen Booth, who celebrated her 100th birthday last July, lived a life filled with history-making milestones. She co-designed of one of the world’s first operational computer. She was credited with the first “assembly language,” and she wrote two of the earliest books on computer design and programming.

Booth, who died on Sept. 29, filled her years with fruitful research, meaningful innovation, inspiring encounters — and involvement with several of the 20th century’s major technological milestones.

In short, Kathleen Booth’s long life took her to the cutting edge of her time, to frontiers of modern research — and often into fields not limited just to computational machines.

Booth’s obituary in The Telegraph notes that after receiving an undergraduate degree in math, Booth was actually involved in the discovery of the double helix shape of DNA. At the age of 24, she’d joined a team of mathematicians at London’s Birkbeck College who were performing calculations for scientists using X-ray images to determine crystal structures.

But research is augmented by calculation, and in this case “the computations involved were extremely tedious,” remembers the Birkbeck College website, “and there was ample incentive for automating the process.” (They also note that Booth was the project’s sole programming assistant — for a project that never had more than a single engineer.)

According to the Telegraph, this led to a fateful trans-Atlantic trip that led to the forefront of a new era in computing. Booth’s future husband, Andrew Booth had been granted a fellowship from the Rockefeller Foundation, allowing Andrew and his 25-year-old programming assistant Kathleen to visit Manhattan Project physicist/mathematician John von Neumann at Princeton University. von Neumann had recently co-authored an influential paper proposing that computer programs could be stored (rather than inputting them into the hardware using complex combinations of switches and patch cables). “Imagine having to program your computer by rewiring it…” quips a 2018 essay at Hackaday.

“Kathleen Booth began working on computers just as the idea of storing the program internally was starting to permeate through the small set of people building computers.”

While there, Andrew Booth and Kathleen wrote a program that could serve as a translation dictionary (provided it had enough storage space), according to a website called the History of Information. The site argues that this program “may be the earliest work leading toward machine or computer translation.”

After returning from their visit, Andrew Booth and Kathleen prepared a typewritten report which acknowledged “many fruitful discussions on both the theoretical and practical aspects” with von Neumann. (And they also expressed their thanks for the “hospitality and opportunity for study afforded” by von Neumann’s legendary Electronic Computer Project and by the U.S. Army Ordnance Department.)

But most importantly, this report documents their interest in an “all-purpose electronic computer… a machine capable of programming all possible calculations, and of executing such a program at electronic speeds.” Their ultimate goal was to produce a computer called the Automatic Relay Calculator (“ARC”), and Kathleen and Andrew Booth worked on it together.

But it was Kathleen who created the operation-identifying assembly language — as well as the assembler that could convert its code into a machine language that the calculator could run. Instructions were represented with 0s and 1s, writes Hackaday, so the command to clear the math register and then transfer in a value from memory was 10011 (on the later ARC2). This made Kathleen one of the first people in the world to ever program software, notes Hackaday.

“But she also got her hands dirty with the hardware, having built a large portion of the computers which she programmed.”

The Telegraph reports that Kathleen received a Ph.D. in applied mathematics in 1950 (the year that she also married Andrew Booth). But more importantly, the Birkbeck College site adds, “the Booths produced an electronic stored-program computer in full operation at the Birkbeck College Computation Laboratory, University of London, by the end of 1952.”

And in 1953 the couple co-authored the book Automatic Digital Calculators, according to the Telegraph “included the general principles involved in the new ‘Planning and Coding’ programming style” and is one of the earliest books ever written on computer design and programming. (The book also includes some of the algorithms the couple had attempted for natural language processing, according to Hackaday.) 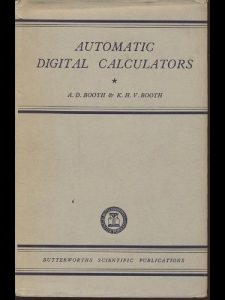 Written nearly 70 years ago, “This book takes place before transistors, CRTs, printers, floppy disks or even memory chips,” writes one reviewer on Amazon, calling it “a beautiful flash of the past when every incremental progression was simply revolutionary.”

“There are some great, casual references to industry giants, for example when they mention how they chatted with Hungarian John Von Neumann, inventor of the computer, about applying his architecture.”

Machines, Books, and a CS Department

Kathleen and her husband remained at the college until 1962, the Telegraph remembers, “working on other computer designs including the All Purpose Electronic (X) Computer (APEXC)… for which Kathleen published the seminal Programming for an Automatic Digital Calculator in 1959.”

Hackaday credits Kathleen with writing software for these machines, and the Booths themselves would later hail the APEXC as “one of the first operational computers in the world.” But they made that remark more than half a century later, in a special essay written for the 50th anniversary of the college’s School of Computer Science and Information Systems (which the couple had co-founded in 1957 as the Department of Numerical Automation).

“Having produced the machines we needed teaching material,” the essay adds, “and so produced the first systematic books on modern numerical analysis, programming and computer design.”

“On the research side we started research on Machine Translation, on thin film storage technology for digital storage, and magnetic drum and disc storage.” The Booth’s essay accompanied a short history of the department, which notes that Andrew Booth created the first rotating data store, “albeit a drum rather than the now ubiquitous disc.”

The Booths’ essay closes by reminding the next generation of students that they’re “the carriers of a distinguished origin.” 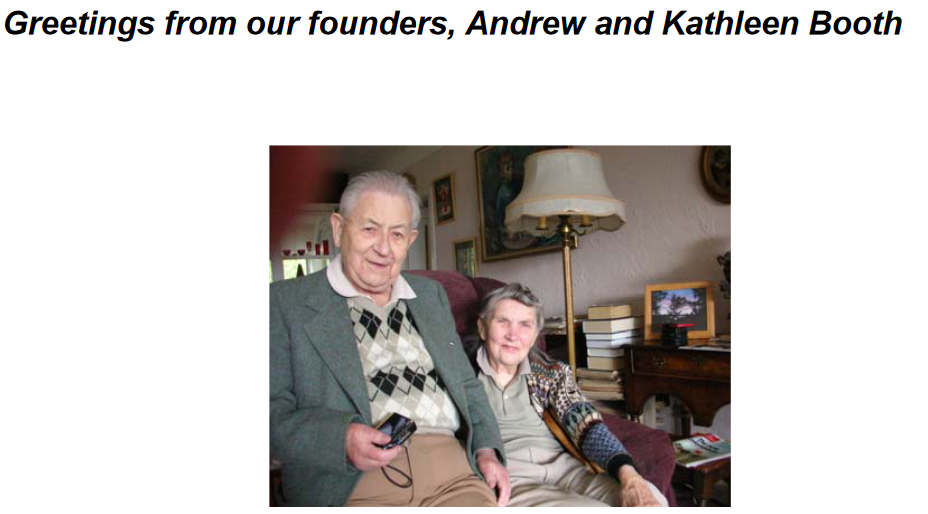 Once equipped with these new computers, it was only natural to apply their powers to the problems of the day. Hackaday also found two annual reports from Birkbeck College in the late 1950s which both acknowledge Kathleen Booth’s programs to simulate neural networks. (Hackaday points out that “This was only four years after the first running of a neural network on a computer.”)

But by 1962 Andrew Booth had become “frustrated” that he hadn’t yet been appointed as a professor — so the couple moved to Canada. (The “Short History” of the computer department adds that “In retrospect, this was a massive loss to the College and, from today’s perspective, totally incomprehensible given his key contributions to computer technology and his huge research output.”) In Canada, according to the Telegraph, Booth became a lecturer/research fellow at the University of Saskatchewan. (“And in 1965 director of a national project on machine translation of language.”)

More honors followed — in 1972 Booth became a mathematics professor at Lakehead University, Ontario, and in 1978 the couple founded a computer consulting business on Vancouver Island.

Booth lived a life devoted to practical and important research — so it’s inspiring that much of it is still available online. You can even still find the abstract for a 1993 paper that 71-year-old Booth co-authored with her son Dr. Ian J. M. Booth: Using neural nets to identify marine mammals. (“A software neural net model to recognise the calls of individual seals has been constructed and has been shown to perform satisfactorily with all of the mammals in the available set. It has also proved stable in the presence of both man made and natural noise….”)

But perhaps most importantly, Kathleen Booth will always be remembered for her groundbreaking contributions to the earliest days of computer history. When the Women’s Engineering Society (founded in 1919), celebrated its 100th anniversary, they created a list of the top 100 historical women in engineering.

And sure enough, the list includes Kathleen Booth, listed as “a co-designer of one of the first three operational computers in the world, and author of two of the earliest books on computer design and programming.”

SHARE THIS STORY
RELATED STORIES
eBay: Betting on Open Source Is Great for Your Business Snack Stack: If Programming Languages Were Desserts ... Entrepreneurship for Engineers: Painkiller or Vitamin?  The Graph of Life in a Post-Relational World The Process Equation (Cadence Is Everything, Part 2)
TNS owner Insight Partners is an investor in: Island.
SHARE THIS STORY
RELATED STORIES
It's No Longer about How You Write Code but How You Operate It Fear and Layoffs: How to Cope with Tech’s Uncertain Times Engineering Leaders: Switch to Wartime Management Now Entrepreneurship for Engineers: Painkiller or Vitamin?  A Guide to Better Developer Experience
THE NEW STACK UPDATE A newsletter digest of the week’s most important stories & analyses.
The New stack does not sell your information or share it with unaffiliated third parties. By continuing, you agree to our Terms of Use and Privacy Policy.