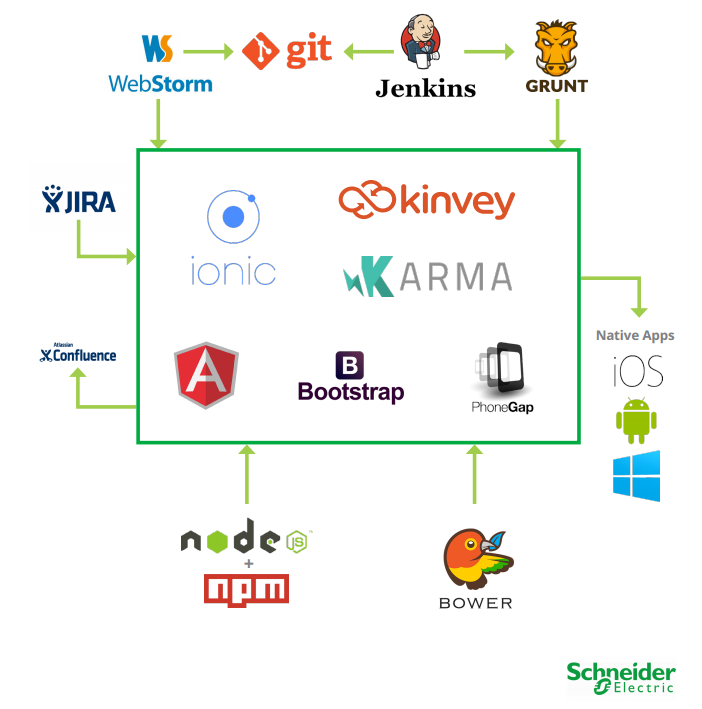 The backend as a service market (BaaS) found a monster competitor in its midst when Amazon Web Services entered the market earlier this year. There were the usual declarations that AWS would bury the competition with the new AWS Moble Service. AWS does indeed look formidable but Kinvey’s news today that it has just raised a $10.8 million round of funding seems to counter the idea that AWS will take all the spoils of the booming mobile app market for BaaS developer tools.

The Kinvey news instead reflects a diverse new stack that is emerging with an ecosystem of tools that companies like Schneider Electric are using to streamline and accelerate their mobile app development cycles.

Last week, Kinvey signed a seven figure deal with Schneider Electric, which has created a new toolchain that they call the “BACK” stack: Bootstrap, Angular, Cordova and Kinvey. It comes with a developer SDK to streamline development and brand consistency for their 4000 developers. The approach is meant to help web developers become mobile developers and eliminate the need to develop separate app versions for iOS, Android, and the mobile Web.

There’s a race that enterprise companies face. Each app they develop represents better optimization or incremental revenue increases. To build these apps, companies need an ecosystem of application frmaeworks, collaborative environments, version control, continuous delivery and other services. Kinvey offers the best of breed BaaS to fill out this emerging tool chain.

NTT saw Kinvey’s acceleration into the Asia market as an impetus for its investment, said Sravishj Sridhar, CEO and Founder of Kinvey. The iPhone is now available there with more carriers, fueling the demand for better mobile enterprise developer tools. Verizon is offering its own cloud services that includes develoer tools for mobile development.

Still, AWS plays as a significant force in the market. As Nancy Ghoring wrote on the New Stack, the new AWS BaaS environment has services such as Cognito, which manages user identity, sync and security. The service lets developers authenticate users through Facebook, Google and Amazon logins. It also syncs data like user preferences and app state between devices. Amazon also announced a new Mobile Analytics service and updated its mobile SDK to make it easier for developers to access AWS services such as S3 and DynamoDB.

Independent BaaS providers offer far more features than these. But some developers might find it easier to choose these AWS mobile tools rather than sign up with a third party.

The BaaS market has been consolidating. Red Hat bought Feed Henry last week to integrate into OpenShift. In the past two years, Facebook has bought Parse while PayPal bought StackMob and promptly shut down the service.

Kinvey integrates with AWS, Google and now VMware. It has a focus on the enterprise mobile market. With a presence in Asia and a fit with other new stack players, the company looks like it can face compettiors like AWS by offering best of breed capabilities that streamline development for an enterprise market now scaling its app development.

Kinvey is a sponsor of The New Stack.