Knocki Turns Any Flat Surface Into a User Interface 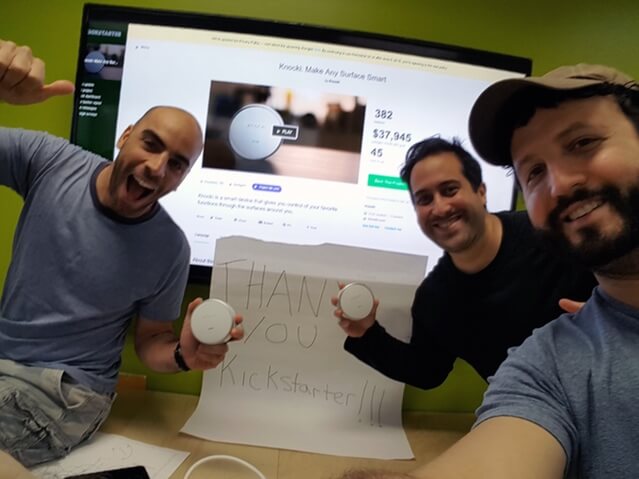 A Texas-based startup is living the dream thanks to a successful campaign on Kickstarter. The company is trying to manufacture a new consumer technology product turn flat surfaces like doors and walls into a giant user interface. It’s called Knocki, a small round device about the size of a smoke detector. Knock on the surface, and it triggers an event. A knock on your door can alert you with a text message. Or a person in a wheelchair could turn on a light across the room.

“The true beauty of our technology is that what it can do is only limited by your imagination,” the company’s CEO says in their promotional video. It shows a child tapping his desk to send his mother a text message letting her know that he’s home. A woman taps her nightstand to hit “Snooze” on an alarm clock—and start up her coffeemaker. Later she taps on a tabletop to find her lost smartphone. 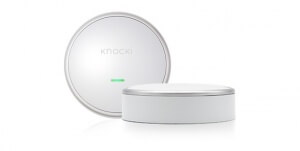 The Kickstarter page emphasizes that “it can be truly life-changing for people with mobility and vision impairments who are unable to reach or see a switch, button, or phone.”

The startup’s goal was to raise $35,000 on Kickstarter. Instead, it raised $500,000 in their first week. They received $300,000 of that within two days, according to newscasters, and reached its original $35,000 goal in less than an hour. “This is a dream come true for us… We are humbled by the overwhelming response,” read the first update they posted to their campaign’s page.

The company’s campaign drew a swarm of coverage from top technology sites, including CNET, CNBC, Wired, and The Verge. This apparently generated a flood of donations, which helped push their funding over $300,000 within three days.”Our goal is to provide something so compelling, gratifyingly simple, and accessible that our customers are amazed,” read a second update. “However, at this moment, I’m not sure who is more amazed, our customers or us! ” And this Tuesday they posted their latest update — with the headline “500,000 Thank Yous!!!”

“We are blown away by the enormity of the support we are getting…! [N]ever in our wildest dreams did we expect this level of pledges in such a short amount of time.”

Now the company hopes to begin production by the end of November and start shipping the devices this December. Their campaign’s page acknowledges the possibility of delays—but also the possibility of an even earlier delivery date.

In an interview with a local news crew, CEO Jake Boshernitzan described the “ah-ha” moment that led to the idea. “Our kids have to go through so much trouble to flip a light switch. An idea was, why can’t we make a regular wall a light switch?” (They’d actually watched their child stacking boxes up until they were able to reach the switch!) They also point out that it’s useful for the elderly.

The devices can run for over a year before the four AAA batteries need to be replaced. And Knocki can even count the taps—so while two taps will turn on your lights, three taps will locate your phone. It recognizes pauses, too, so it’s basically a simpler version of Morse code. Each Knocki device can respond to up to 10 different commands. And a single command can trigger a set of responses.

But the most intriguing thing about the device is its apparently endless variety of applications. Knock’s web page suggests you could get a text message when your mail is delivered. Tap on a bathroom countertop to play music. Tap twice to skip a song when it comes up in your playlist. Turn on a ceiling fan. Summon an Uber driver…

My favorite example was probably the ability to impress your date by dimming the lights in your apartment and bringing up romantic music—all with a knock on a tabletop. People have talked about the Internet of Things — but Knocki finally lets you control those things with your hands, according to Jaime Raijman, Knocki’s director of design. “The beauty of our product is it makes any regular environment into a user interface.”

SHARE THIS STORY
RELATED STORIES
What Is a Sociotechnical Knowledge Map and Why You Should Care Hacks to Help Open Source Leadership Support Inclusion How and Why to Respond to Incidents the Right Way eBay: Betting on Open Source Is Great for Your Business How Security Champions Can Change Your Culture
SHARE THIS STORY
RELATED STORIES
Slack: How Smart Companies Make the Most of Their Internships Kathleen Booth, Creator of the First Assembly Language Low-Code Tools Improve Devs' Work-Life Balance, Survey Finds Building an Internal Developer Platform Isn't Just about Tools SANS Survey Shows DevSecOps Is Shifting Left
THE NEW STACK UPDATE A newsletter digest of the week’s most important stories & analyses.
The New stack does not sell your information or share it with unaffiliated third parties. By continuing, you agree to our Terms of Use and Privacy Policy.