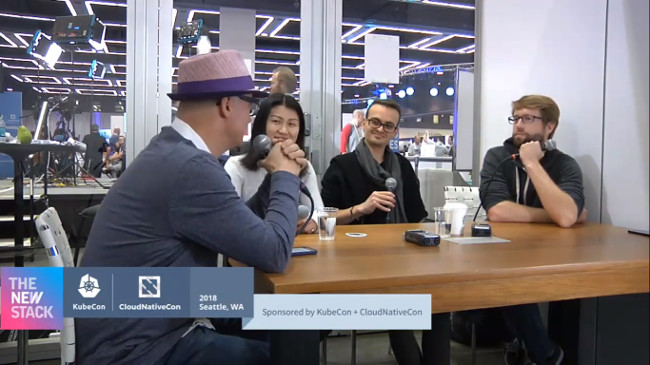 The sheer size of KubeCon + CloudNativeCon 2018 in Shanghai, which was held in November and drew an estimated 8,000 attendees, attests to how the open source movement is both mainstream and plays a key role in software development today. The thousands of attendees reflect the exploding number of people involved in the open source community worldwide who play a part in this renaissance era of open stack development.

While at KubeCon + CloudNativeCon 2018, Alex Williams, founder and editor-in-chief of The New Stack, spoke with three people involved in exciting open source projects. On hand to discuss their work were:

Fu began by discussing how creating a SaaS offering within VMware came about. “Internally, we actually took an on-prem solution that we built internally and decided to take that stack and transform that into a SaaS offering. And when we built the stack from day zero, we wanted to use the technology and the open source community [in a way] that would serve as the best outcome for the company as well as for the open source community,” Fu said. “So, internally, when we pick a SaaS control plane… we’re actually specifically picking the open source technology.”

VMware’s Lightwave, a stack that offers identity and management certificates, is an example of a lesser-known, yet important open source project that reflects VMware’s open source philosophy and practices. “We’re actually making sure that we can convert these innovations so that we can deliver this business outcome for the company,” Fu said. “So, I think it’s quite a journey for us to taking on-prem solution coming in itself. There’s a lot of operational learnings that we came through throughout this journey.”

The fact that Watts was one of the first developers to be involved in the Rook project has enabled him to offer a bird’s eye view of what the platform can offer the Kubernetes community. To wit, Watts said  “the original vision is still something we’re finding to be ringing really true with a lot of the users where, you can’t always depend on a cloud provider to manage your service.”

If you’re running servers in-house, there are less-than-optimal alternatives for storage include expensive solutions from third-party vendors, appliances or other alternatives — “or you can just use the commodity hardware that you’re already running your Kubernetes cluster on,” Watts said. “You can have a hyper- converge type of scenario where you have your compute and you have your storage all in the same machines and you can end up running a really reliable high-performing pool of storage directly inside that Kubernetes cluster,” Watts said. “So, really, I think where Rook shines is providing storage on premises or running the hardware bare metal yourself. And the way I think that it’s growing, though, is that for storage and Kubernetes, it’s amazingly done and it’s done a very good job with abstracting storage to a volume level.”

Meanwhile, Dvoretskyi discussed how the number of projects under the CNCF umbrella have exploded, adding further credence to the vibrancy of the open source community. “It is a lot of work but much more work is happening inside the communities,” Dvoretskyi said. “So, again, as I mentioned, one of the biggest benefits of being a project within CNCF is that, if you are donating the project to CNCF, you are still the project owner, you’re still managing this project… So, I would say that it’s a great opportunity for us at CNCF to host so many projects but it’s also great to see so many people within these communities that are managing themselves.”

4:30: Touching base on the VMware and Kubernetes offerings, and the Harbor project.
7:06: What is Rook addressing that provides that ability to address storage for Kubernetes, and how is it evolving?
13:01: How do you manage your team when you have to think about software development in an open source context?
16:28: What is Rook’s experience in the CNCF?
22:20: What is the approach VMware is taking so you can scale out your own engineering efforts for these open source projects that will continue to be core to the business?
27:47: How is Rook looking to extend itself into 2019?