Tuesday, Hammerspace launched the ability "to deploy persistent Data-as-a-Microservice while scaling stateful applications across multiple Kubernetes clusters, on-premises or in any cloud," according to a statement.
Mar 5th, 2019 10:24am by Mike Melanson 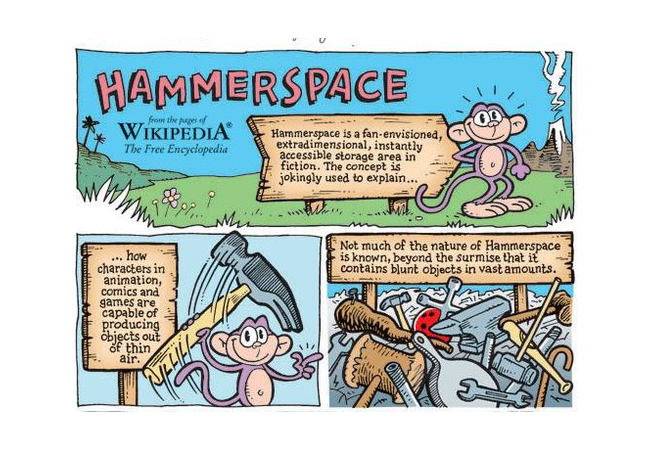 Feature image: Details from a WikiWorld cartoon by Greg Williams/Wikimedia Foundation, explaining the concept of “Hammerspace” licensed under CC BY-SA 2.5.

The first thing David Flynn wants you to know about Hammerspace is that it isn’t just another storage company: The company is the first one out there to provide Data-as-a-Microservice.

Tuesday, the company launched the ability “to deploy persistent Data-as-a-Microservice while scaling stateful applications across multiple Kubernetes clusters, on-premises or in any cloud,” according to a statement.

“The craze around microservices is all based on the premise of it being stateless and the challenge is that, at some point, you have to tie into the durable data of an organization,” said Flynn, who is the CEO of Hammerspace. “What makes a company valuable, is their data. How you work with data in a container environment is the challenge. We represent the containerization of data,”

“We’re not a storage company,” he said. “We’re not selling you a new kind of storage. That’s the last thing the world needs. We’re saying data ought to behave a lot like your containers. It should be extremely agile,” he said. 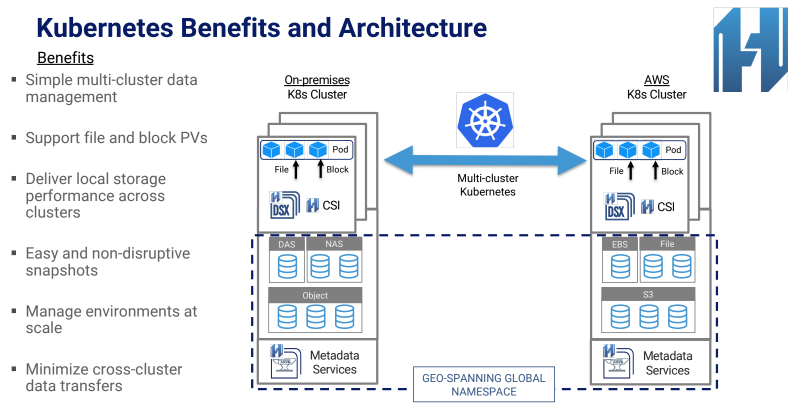 Stepping back, the basic idea behind Hammerspace is the separation of the metadata from the data, and the separation of the service locating and accessing your data from the one storing it. But really, there is very little that is simple about what Hammerspace is doing in bringing data virtualization to containers. Flynn offered a simple analogy in a presentation included below and quoted thereafter:

“It’s like using DNS,” Flynn explained in the presentation. “Can you imagine if your DNS server had to proxy all the traffic? Having your control plane and your data path coupled is akin to having your DNS infrastructure have to also pipe all the information around the internet. It wouldn’t work,” said Flynn. “The separation is what makes this key. And we’re talking about this as Data-as-a-Service because this allows you to access your data across the infrastructure as a service abstracted away from where it physically resides.”

A GigaOm article written at the company’s launch attempts to dispel any skepticism while acknowledging its likelihood.

“HammerSpace is brilliant just for one reason. It somehow solves or, better, hides the problem of data gravity and allows their Data-as-a-Service platform to virtualize data sets by presenting virtualized views of them available in a multicloud environment through standard protocols like NFS or S3,” the site explained, offering the following video as further evidence:

Returning to this week’s news, the company is now bringing this data virtualization to microservices, and Flynn explained that it brings the value of long-term stateful data to stateless, containerized applications.

“What enterprises need is a way to connect enterprise data to container environments and manage it. Stateless microservices only get you so far,” said Flynn. “Something has to plug in and sync the data back to enterprise data that are governed and lives over the long term. These databases have to store their ingested data somewhere. We provide a platform to where their state can be housed and managed and replicated, so they too can become systems of record.”

The company certainly brings some expertise to the table. The Hammerspace CTO is Trond Myklebust, the maintainer of the NFS stack for Linux and part of a team that he says is responsible for “more than 70 percent of all the enhancements of managing data independent of storage.”

According to the company statement, the new service will “make file data cloud-native with Hammerspace data management for multi-cluster Kubernetes” and offer “a storage and protocol agnostic cloud data control plane, abstracting data from the infrastructure for self-service hybrid cloud data management, driven by machine learning and metadata management to deliver Data-as-a-Service.”

The new Hammerspace product works with upstream Kubernetes, as well as most all major Kubernetes offerings, including AKS, EKS, OpenShift, and GKS, as well as numerous database systems, including Microsoft SQL Server, MySQL, Redis, Elastic, MongoDB, and Cassandra. 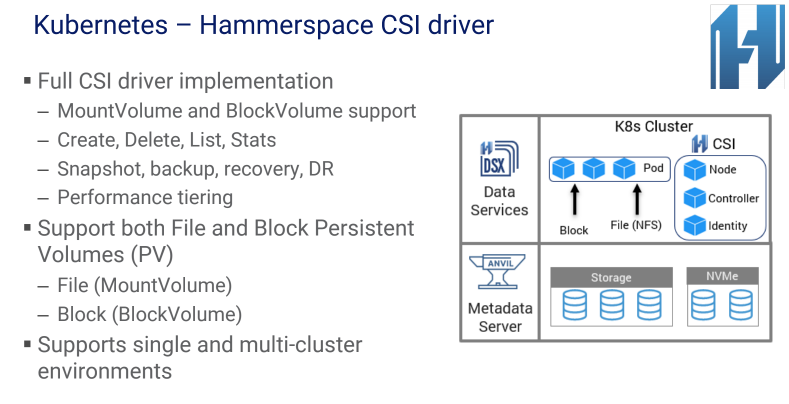 Mike is a freelance writer, editor, and all-around techie wordsmith. Mike has written for publications such as ReadWriteWeb, Venturebeat, and ProgrammableWeb. His first computer was a "portable" suitcase Compaq and he remembers 1200 baud quite clearly.
Read more from Mike Melanson
SHARE THIS STORY
RELATED STORIES
Java's History Could Point the Way for WebAssembly Lessons from Deploying Microservices for a Large Retailer Confluent Adds Tighter RBAC, Grafana and Other Features Instacart Speeds ML Deployments with Hybrid MLOps Platform The Kubernetes Manifest Life Cycle Too Often Overlooked
TNS owner Insight Partners is an investor in: The New Stack.
SHARE THIS STORY
RELATED STORIES
The Gateway API Is in the Firing Line of the Service Mesh Wars  The Kubernetes Manifest Life Cycle Too Often Overlooked Do ... or Do Not: Why Yoda Never Used Microservices Java's History Could Point the Way for WebAssembly Event Streaming and Event Sourcing: The Key Differences
THE NEW STACK UPDATE A newsletter digest of the week’s most important stories & analyses.
The New stack does not sell your information or share it with unaffiliated third parties. By continuing, you agree to our Terms of Use and Privacy Policy.