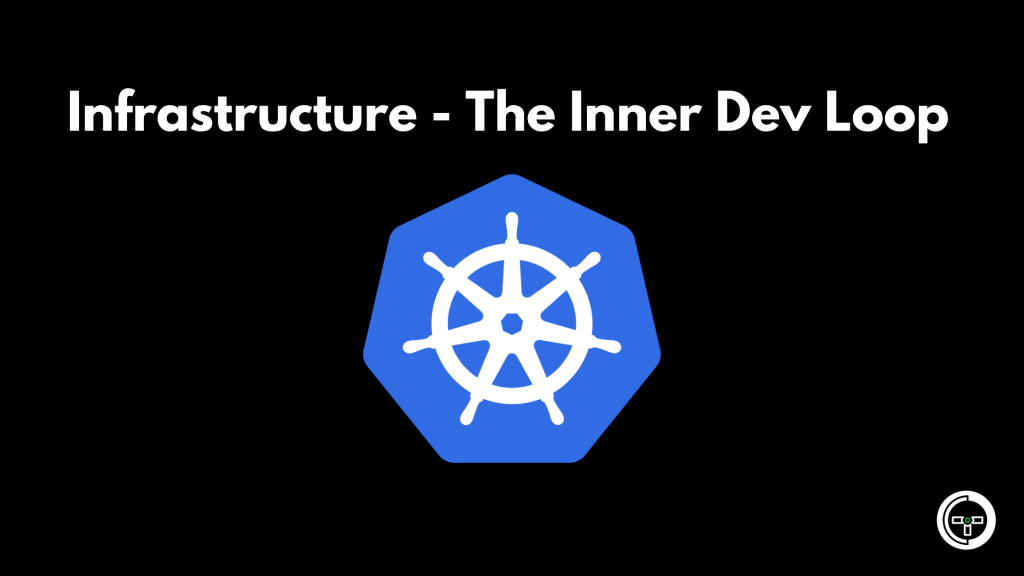 This article is a part of a series on Kubernetes and its ecosystem where we will dive deep into the infrastructure one piece at a time.

While we have explored the various principles, architectures and deployment strategies around the Cloud Native Kubernetes Stack so far in this series, having such complex and distributed systems can often become a huge toll on productivity and agility for the Engineering and DevOps teams if not done right. While having a cloud native stack is really important in today’s world, it should be complemented with a clear path to a faster development workflow bringing in the much-needed agility to the teams. That is exactly what we are going to discuss today.

According to Kubernetes-focused DevOps stack provider Ambassador, the “Inner Development Loop” is “The iterative process of writing, building and debugging code that a single developer performs before sharing the code, either publicly or with their team.”

Then, there are “outer dev loops” which start as soon as your code is checked into version control (or you send a PR for the same). This is where you hand over most of the responsibilities to automated systems, CI/CD pipelines to do the job for you as per a typical GitOps workflow.

The inner dev loop is the most critical of both because this is where the actual work is done by the developers who are either working on enhancements, bug fixes, security issues or anything you can imagine. This is where there a rapid and continuous feedback loop really helps debugging issues, making changes and immediately seeing the output in front of them without any context switching or delays. This means that a faster inner dev loop would mean great productivity, happy developers, rapid shipping cycles which ultimately translates into happy customers and better revenue growth.

Now that I have made my attempt to convince you on what the inner dev loop is and why it is really important for both the developers as well as for the business, let us have a look at what it actually looks like.

This is how a typical inner and outer dev loop looks like: 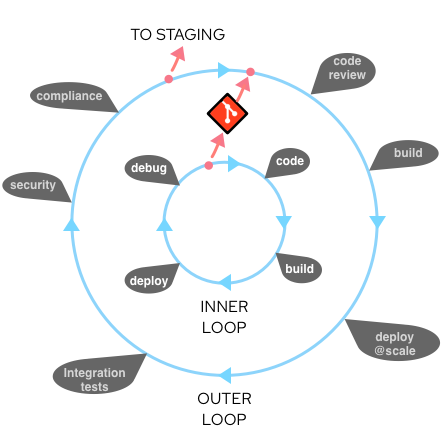 Since the inner dev loop is where you spend most of your time in your workflow, it calls for a lot of optimization, taking away all possible bottlenecks in the development process and let us be honest, working with Kubernetes has been hard so far considering the huge amount of complexity we carry with us from both Kubernetes and the tools around it.

But no longer. This has been the most important focus of the Kubernetes and open source community especially for the past year with a lot of amazing tools now available to solve the issue of the inner dev loop. But before we dive into those, let us have a look at what we expect from such tools, and how we can make the inner dev loop much faster.

Now that we have made everything clear about our expectations and the various ways in which we can speed up the inner dev loop, let us look at some options we have out there today.

Telepresence from Ambassador (now part of Cloud Native Computing Foundation), had been the pioneer for inner dev loop for quite some time now and can be a really good fit if you already have all the isolation in place between developers (be it as separate clusters or namespaces). It offers various mechanisms to divert traffic to/from your local machine to the remote clusters using Proxy and Swap deployments with/without docker in place.

But this can become challenging if you would like to have multiple developers share the same namespace creating a lot of conflicts in the network traffic since it has no mechanism for collaboration without Telepresence (Proprietary, initially called Service Preview) which will essentially run a telepresence proxy in your cluster and helps in routing the requests based on the headers with the help of Traffic Manager from Ambassador.

The other fact you need to be mindful of is that it currently uses SSHD and you might run into security permission issues if you are running a restricted pod security policy in your cluster. 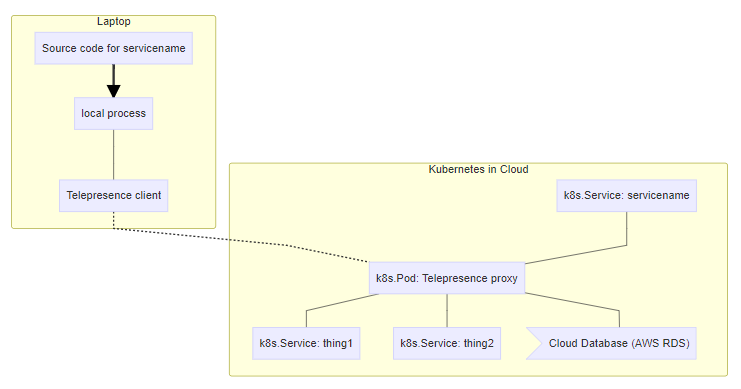 Tilt is a great tool to have in your stack if you are someone who does most of the work with local Kubernetes clusters be it Kind, Minikube, MicroK8s, K3s or anything similar. Tilt uses Starlark for all the configurations making it really easy for you to work with, especially if you know Python without worrying too much about fiddling with YAML files and you can orchestrate multiple Tiltfiles as well. As they say, it is as simple as doing tilt up and tilt down making the experience pleasant when you work with local clusters, supports port forwarding, multiple container engines/builders and comes with a nice dashboard as well with logs, alerts and related info which you can also use as your playbook even for all the shell scripts you may have.

And while it does support remote development with the ability to do live sync, it is not well optimized for that, does not support hybrid workflows out of the box and since the dashboard is a separate interface, you will need to switch contexts between your editor and dashboard (you will definitely want to have multiple monitors in this case) which can prove to be costly over time.

But considering it is in its very early stages as a startup, I do believe that there is a lot of amazing things in the pipeline (they are currently working on Tilt Cloud) and might be interesting to wait and watch what they have to offer.

If you are someone who is looking to have one namespace for every developer or a completely isolated environment, then Okteto can be a good choice. The Okteto CLI is open source and enables you to work with any local and remote clusters with support for file syncing, SSH server support, etc. though it does not give you the complete ability of Okteto cloud with temporary dev or preview environments, automatic resource cleanup and more.

While it does offer a fast inner dev loop when working with your remote clusters, it does not support a hybrid workflow yet. But being a very new startup, we can expect a lot from Okteto as well soon.

While Garden advertises itself as a tool for making testing easy in Kubernetes, it is a really powerful tool when it comes to the rest of the development workflows as well. While it does not support hybrid workflows yet, it does support local and remote development workflows and makes use of the concept of a Stack graph where all the dependencies maintain their own configurations and are ultimately defined explicitly.

The issue here is that Garden can turn out to be an overkill for a lot of applications since you have to learn and apply a considerable number of concepts starting from Projects, Modules, Services, Tests, Tasks, Workflows and more making it difficult to start off with, lack of support for hybrid workflows and features like automatic environment cleanup are planned only in enterprise versions of the product.

But if you are willing to spend the time to set up and maintain all the configurations you would need, Garden can be very much worth the effort. 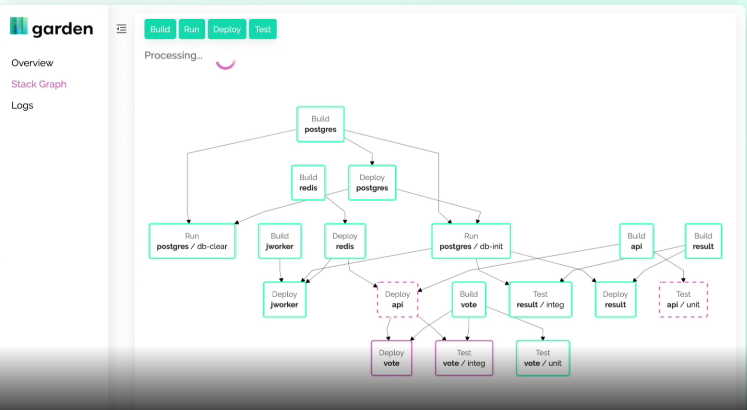 Skaffold is in a really interesting space today helping developers not just across the inner dev loop, but the outer dev loop as well where you can not just use it for your development workflows but also in your CI/CD pipelines as well. And even more interesting is its integration with Cloud Code extension which makes the development experience really pleasant. It has powerful features including the ability to do file sync, port forwarding of services, automatic cleanup (for local clusters), log tailing, automatic tagging based on templates, support for multiple container builders, support for multiple profiles along with support for helm charts and other deployment mechanisms thus packing a comprehensive feature set for all in active development with huge community support and backed by the amazing Google Container Tools team.

But as with many other tools we have seen in this list, it doesn’t support Hybrid development workflows yet, can be tricky when you are using it with microservices (They are working on support for Multiple Configs), remote development can be quite tricky and Cloud Code is still in its early days of active development with a lot in their pipeline.

While it may not be relevant to all, Cloud Code also ships with integrations to GCP like (Cloud Run, APIs, Secret Manager, Project Explorer, etc.), allows beginners onboard quickly with Kubernetes, comes with inbuilt debugging support for multiple languages, IntelliSense for Kubernetes YAMLs, Log Viewer and more this making Skaffold and Cloud Code a great pair. 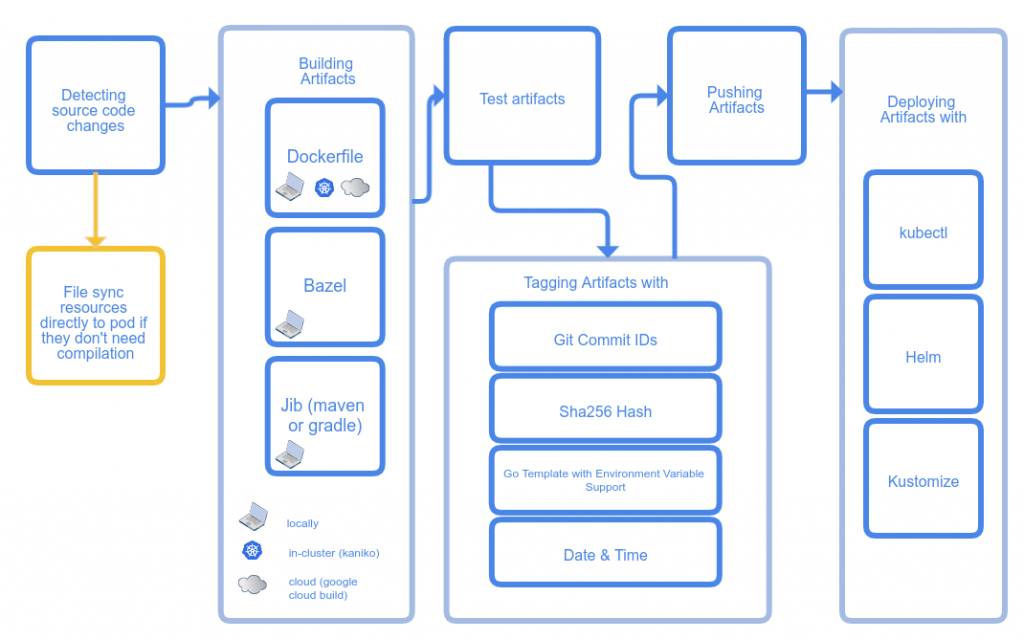 Bridge for Kubernetes is a very new tool from Microsoft which recently went GA. It aims to provide the Hybrid workflow which we have been talking about all through this blog allowing the developers to concentrate just on the service they are working on while taking care of the rest of the routing by itself based on the headers being sent. You can read more about how it works here where it runs an agent in your Kubernetes cluster, uses Envoy to do the routing based on the headers, does port forwarding locally thereby allowing multiple developers to work on the same service in the same namespace at the same time without affecting the work of the other which is exactly what we are looking for here.

But since it is in the very early days, I did face quite a lot of challenges running it which I have documented here like lack of support for VSCode Remote SSH, sidecar support, problems running it with restricted pod security policy, etc. but all of those issues are definitely in their radar and we can expect something great from them hopefully soon.

One thing to note though is that Bridge for Kubernetes does not satisfy the complete inner dev loop equation all by itself and leverages the ecosystem. In fact, it hooks into Kubernetes VSCode extension and uses its API to do the rest behind the scenes. So it can be seen as an important piece to a bigger puzzle.

These are not the only tools in the show right now. In fact, we have not talked about tools like Ksync, Squash, Draft and more all of which focuses on the inner dev loop while attempting to solve the problem differently and the best way to choose the right tool for you is to actually try them out keeping your use case in mind. In fact, I just wish I can have a tool with a mix of the best of all these tools I have listed and that day is very much near us and the best way to speed the process is to contribute back and everything counts, small or big, be it contributing back to the source, attending UX surveys, filing bug reports, write blogs like this or contributing to the docs.

My vision for the Kubernetes ecosystem is that it fades away behind the scenes while allowing the developers to concentrate on the most important thing they have at hand, the business logic and problem to be solved and considering all the developments we have been seeing in the ecosystem, we should reach there soon.

If you have any questions or are looking for help or consultancy, feel free to reach out to Vignesh TV via Twitter or via LinkedIn.