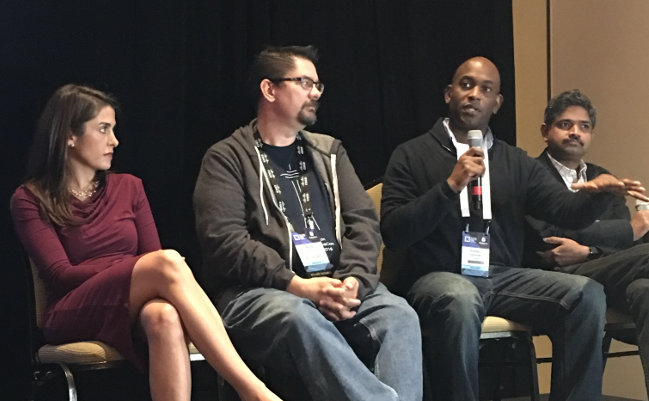 Building a community is not something that can be done only by the majority, or through listening to those that spread misinformation. This is particularly true when it comes to the communities that coalesce around software, such as Kubernetes. Ultimately, one must consider the impact that fear-mongering, the spread of misinformation coupled with ill-informed opinions, and drawing lines as to which platform will ‘win,’ will have on advancing technology as a whole.

While Google’s support has clearly bolstered the Kubernetes community, Kubernetes development did not do so behind closed doors. The company has been transparent and open about the project’s direction, what the community could expect, and its overall goals. This stance has meant solid growth for Kubernetes. In part, Kubernetes is becoming another center-of-gravity for the world of containers, which has long been dominated by Docker.

“I do think there’s a genuine fear in the community that Docker’s going to become too powerful. I think that’s really helped fuel a lot of the growth around Kubernetes, is that there are a lot of companies who don’t want Docker to own the ecosystem. I think we’ll see how this plays out, but I won’t be surprised if some folks at Docker regret their initial approach to community,” Brescia said.

Attendee Rob Hirschfeld, CEO of RackN questioned the panel about to best grow the Kubernetes community while it is continuing to expand at such a rapid rate.

“I focus on education and individual empowerment. I think education has to be something that we share responsibility of. Each person must publish and share even the smallest ideas,” said Hightower. “It is helpful to have a structured plan where someone is actually thinking about this stuff, and putting processes in place to put the tools in the hands of the people,” Brescia added. Individual accountability and access to resources will not only mean the Kubernetes community will continue to flourish, but that its contributors have the ability to access the things they need to contribute at a meaningful level.

Jackson later went on to ask if there is currently a bubble, with the Kubernetes community jumping too far ahead of the container community as a whole. “Why are you hating on the bubble? You’re trying to steal our joy, but we have Kubernetes. For some people, it’s the dream that keeps us going,” Hightower replied.

In the final moments of the panel, a lightning round was presented in which each panelist had two minutes to theoretically council Docker in an effort to help it change how it interacts with the community. Here’s how they responded:

Brescia: “I think I’d tell them that they need to make a strong statement about how they might consider changing their behavior moving forward, to actually embrace the community and share a little bit about the direction they plan on going.”

Hightower: “Do not go out there and be uneducated giving opinions that are confusing the community. If you haven’t paid attention to what is happening the last three weeks, you are just causing confusion and misinformation. That starts to build distrust. We don’t need to defeat the opponent, in this case, we’re not playing Mortal Kombat.”

Owens: “Helping customers solve problems is about picking the right tools. Don’t worry about picking something not in the Kubernetes community, but do let us know so we can add those features to the project. We want to make the services, and the solutions, better.”

MSV: “From a customer’s point of view, it really doesn’t matter. 98 percent of customers don’t really understand containers. I think that’s far more important to evangelize containers, rather than getting into arguments over what to use. I think it’s our responsibility to educate on the benefits of containerization, and then to talk about the right tool to solve the problem.”

Bitnami, Docker, and Cisco are sponsors of The New Stack.