Could Laser-Radio Replace Fiber Optics in the Internet of the Future? 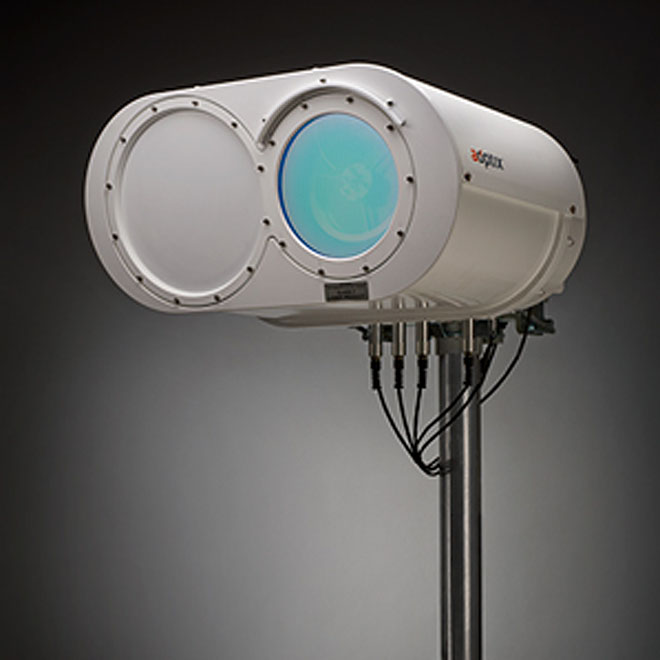 Having outnumbered the human population a couple of years ago, the widespread proliferation of mobile devices all around the globe is severely testing the infrastructure limits of the Internet. An increasing number of providers are trying to keep up with demand by installing new fiber optic cables to offer more reliable and faster service. However, this is not always possible in cities, where digging up the ground is cost-prohibitive and even politically contentious, while replacing old copper cable networks in low-populated, rural areas simply doesn’t make economic sense.

Lasers to the Rescue

But one company is now experimenting with using laser-radio technologies (LRT) in tandem as a way to circumvent this growing problem. Campbell, California-based AOptix is piloting the technology in the form of mountable devices with two eyes — one for an infrared laser that can shoot through air (“free space optics” or FSO), the other for directional millimeter wave radio frequencies (RF). These devices are then placed at 10-kilometer (6.2 mile) intervals to give Internet connectivity over long distances — bringing reliable and comparably fast Internet access to places that might not have been previously seen as economically feasible. 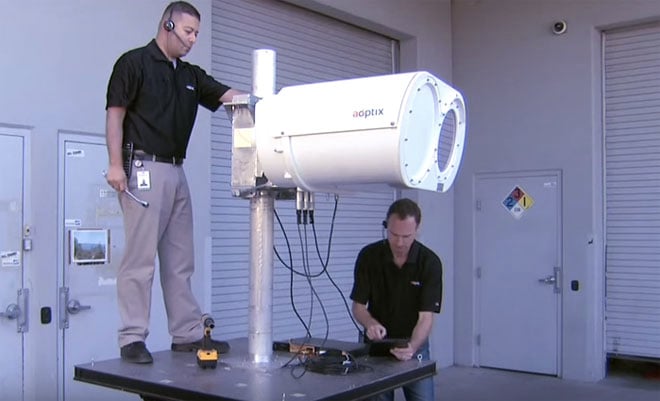 Originally developed for use in the U.S. military as a way to allow ground stations, fighter planes and drones to exchange data seamlessly, the company believes that this technology is especially attractive for providers of wireless services. One strength of the AOptix system’s design is its redundancy. By themselves, either laser or radio technology alone cannot reliably provide connectivity: lasers can be affected by foggy conditions, while “rain fade,” snow and ice will adversely affect any radio transmissions.

When paired together, laser-radio transmissions are able to provide relatively fast connectivity in almost any kind of weather. For those who are skeptical about information being carried on laser beams of light, one only has to look at NASA’s recent efforts to develop laser-based communication methods that would allow spacecraft to send high-resolution images and even 3D video back to Earth at incredible speeds. Once the wrinkles are ironed out, proponents of this laser communication technology foresee a future where information will be sent over a laser-based, interplanetary network connecting the whole solar system.

According to Chandra Pusarla, senior vice president of products and technology at AOptix, laser-radio technology has a definite cost advantage over fiber optic cable, which is more reliable but much more expensive to install in terms of time and labor; in some places like New York City, laying down one kilometer of new fiber optic cable can cost upwards of $800,000 — not to mention the regulatory wrangling that might accompany it. While laser radio is about ten times slower than fiber optics — offering speeds of around two gigabits per second — the company believes that the advantages outweigh this aspect and is already working on a 10 gigabit per second product.

AOptix’s Real-Time Atmospheric Correction (RTAC) and Active Beam Steering (ABS) technology uses “proprietary algorithms to composite raw data from both frequencies” in order to create an error-free wireless signal that plows through most weather conditions. The company sees laser-radio technology as the option of the future that can offer improved, low-latency wireless access, robust reliability and easier deployment over traditional methods of transmission.

So what might this mean for the future of the Internet? AOptix is already participating in pilot projects of the technology with one Mexican and three American Internet providers, and according to a recent press release, is already used in seven different countries for a variety of applications, including “mobile backhaul, fiber extension, fiber diversity and financial markets.” If all goes well, we may see the reach of the Internet expand into far-flung, previously underserved areas, or improving better wireless services in densely built-up cities. And of course, there could be unanticipated developments in the technology that might see it make a transition into outer space. One day, our conception of a wired world may shift to one that’s completely wireless, thanks to a web of connections built on beams of light and waves of sound. More over at AOptix.

SHARE THIS STORY
RELATED STORIES
The Power and Ethical Dilemma of AI Image Generation Models Why 'Explainable AI' Can Benefit Business Why Your Code Sucks: Common Excuses for Bad Programming Java's James Gosling on Fame, Freedom, Failure Modes and Fun Wellspring of Creativity: Why Public Domain Matters
TNS owner Insight Partners is an investor in: Real.
SHARE THIS STORY
RELATED STORIES
Entrepreneurship for Engineers: Building for Customers’ Love 2023 Will Be the Year FinOps Shifts Left Toward Engineering Golden Paths Start with a Shift Left SRE Housekeeping: Where to Get Started for New Hires CES 2023: Robots, Astronauts, Schwarzenegger and Flying Cars
THE NEW STACK UPDATE A newsletter digest of the week’s most important stories & analyses.
The New stack does not sell your information or share it with unaffiliated third parties. By continuing, you agree to our Terms of Use and Privacy Policy.