2019-06-27 17:00:22
Kubernetes Co-Founders On K8s' Past, Present and Future (It Ain't All Pretty)
podcast,sponsor-cncf,sponsored,sponsored-podcast-day-of-podcasting,the-new-stack-makers,
Kubernetes / Sponsored

Kubernetes Co-Founders On K8s’ Past, Present and Future (It Ain’t All Pretty) 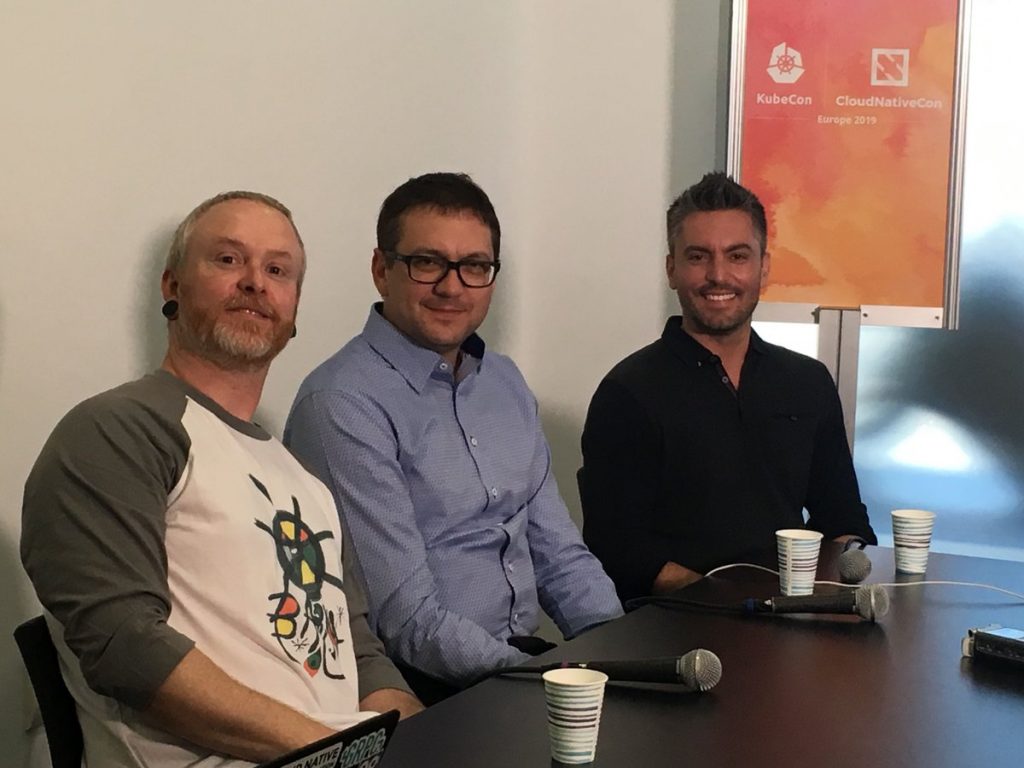 Many have an opinion of what is right — and wrong — about Kubernetes. During this podcast recorded live at KubeCon + CloudNativeCon in Barcelona in May, The New Stack posed some of the harder questions about Kubernetes’ past and future to Kubernetes co-founders Tim Hockin, principal SW engineer, Kubernetes, GKE, and Google Cloud, and Craig McLuckie, vice president, VMware. who is one of Kubernetes creators. The New Stack also solicited thoughts from Gabe Monroy, partner program manager, Microsoft, who is a lead product manager for containers on Microsoft Azure and described himself as  “one of the most engaged early community members.”

While the Kubernetes creators were certainly happy with the results from the creation of Kubernetes, Hockin said its popularity was something “you could never have predicted.” “In terms of lessons learned, it’s not something you could have planned for, but then again, we could have tried,” Hockin said.

But as far as planning for the explosion in Kubernetes’ popularity and adoption, McLuckie noted how it was, and continues to be, impossible to anticipate every consumption and usage model when deploying and operating a technology like Kubernetes.

However, from the outset, McLuckie noted how the project founders reckoned with the “tremendous amount of power of the community.” This project was not really about any one person or any one group, but really about creating an opportunity to bring together a very robust and engaged community that was built along a set of common ideals to create a positive outcome,” McLuckie said. “And so, if there was a piece of advice for other projects, it’s that there is a lot of utility and efficiency in building an effective engaged community around anything.”

The Kubernetes community did see a split away from Docker. While working in a chief technology capacity at Deis, at the time, Monroy said, for example,  “we were one of the first in the community to make a very public bet on the API And sort of walk away from things like Docker Swarm. “It came down to a couple things: one was the machinery behind the community — it wasn’t just that there was a community, it was there was a well-oiled machine,” Monroy said. “The other element, — And I’d argue that still today (and this is really an important element of communities) is [how] Kubernetes today has been able to… do things that no one who created it could have envisioned it doing.”

But on the other hand, McLuckie applauded Docker’s “utility of vertical integration” and how Docker used that to “create a perfectly curated tuned experience for a specific outcome.”

“So they did a great job of, you know, code to container and creating a really accessible and usable tool chain,”  McLuckie said. “When I think about the community and why it evolved around Kubernetes, rather than Docker, I think it really comes down to that sense of is the utility being driven by vertical integration or is the utility being driven by modularity, because Kubernetes was a far more intrinsically modular system. This enabled every vendor to look at it and see some way to create unique value,” McLuckie said. They could squint at it and say, ‘I could add this and will create value, I could do that a great value.’ As a result, became a natural aggregation point for the entire community to rally around, whereas because Docker was much more focused on that vertical integration and closed system experience,  it just wasn’t that interesting to a lot of the other vendors that wanted to bring resources and consumers.”

Beyond the hype, Kubernetes should represent a “perfectly consistent substrate that stitches together well — and if we will do our jobs right, It will enable an entirely new wave of innovation and the stuff that we will be talking about, not the Kubernetes, will be the next-generation distributed systems that are built on Kubernetes,” McLuckie said.

The end result should be “making sure that, as an industry, we can repeat what we were able to do with Kubernetes and make sure that the next layer and the next set of systems that we are building on top of communities are also multivendor open source and welcoming to a very diverse set of open source contributors,” Monroy said.

4:45: What do you remember about back in 2016 when there was essentially a split in the community between Docker and Kubernetes? What is your lesson learned during that time period?
14:31: Google Borg, Borglet, and how moving out of isolation helped to build Kubernetes.
16:58: Creating an opportunity for folks to showcase what they’d learned in a community lens must have been highly motivating.
18:39: So it was built from scratch, then?
20:06: Did it feel like a Google product, or a product for customers in the overall market?
24:01: Was there an ah-ha moment after you decided to adopt Go as a programming language for Kubernetes?


VMware is a sponsor of The New Stack.