Lenovo Bulks up Its Edge Server Portfolio for AI 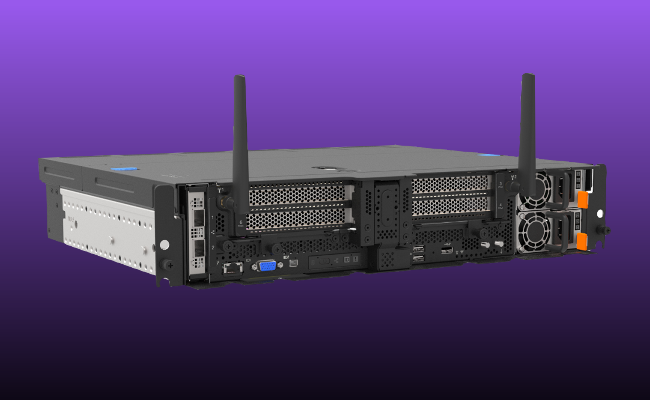 The ThinkEdge SE450, launched last week, is the most powerful of the hardware maker’s growing stable of systems aimed at an expanding edge environment that is growing in its demand for IT devices that can run such emerging workloads as AI, machine learning (ML) and data analytics without having to first ship data to the cloud.

Doing so requires that enough compute power and storage be packed into a system small enough to fit in a rack in a retail shop or placed on a wall in an office.

“Traditionally edge computing was typically a PC under a desk or maybe running a point-of-sale application with very limited power requirements,” Charles Ferland, vice president and general manager of edge computing and communication service providers for Lenovo’s Infrastructure Solutions Group (ISG), told The New Stack, noting that adding PCs for every edge application no longer makes sense. “It gets too complicated. What we’re seeing now is that the more powerful system like the SE450 is running multiples of those applications in the store, in the restaurant, in a hotel.”

In the SE450, Lenovo is offering a single-socket, 2U server that has a shorter depth than traditional rack systems, with models at 300mm and 360mm. Inside the system is a third Gen Intel Xeon “Ice Lake” Platinum processor and either four single-width or two double-width Nvidia GPUs, giving the system enough compute power to run many AI workloads, Ferland said.

For storage, it offers standard software RAID and optional hardware RAID with or without cache or SAS host bus adapters (HBAs).

“This is really fine-tuned towards an edge AI type of application, especially for industries like smart manufacturing, retail, smart city or infrastructure and the telecom industry,” he said.

Opportunities at the Edge

Lenovo and just about every other infrastructure vendor see an opportunity at the edge, which has quickly become the third leg in an IT stool that includes on-premises data centers and the cloud. Organizations are demanding tools that allow them to store, process and analyze the vast amounts of data that is being generated closer to the systems, Internet of Things (IoT) devices and sensors that are creating the data rather than incurring the costs and latency issues involved with sending the data to the cloud.

According to market research firm Statista, global spending on edge computing will reach $10.96 billion by 2026, up from about $1.93 billion in 2018. Lenovo noted that Gartner analysts predict that 75% of enterprise-generated data will be processed at the edge by 2025 and that by next year, 80% of enterprise IoT projects will incorporate AI.

Lenovo currently has a number of ThinkEdge servers, including the SE30 and SE50, the PC-like systems that Ferland noted are small servers powered by Intel Core processors. In 2019, the vendor launched the ThinkSystem SE350 — which Ferland said will adopt the ThinkEdge moniker in the future — a 1U edge server housed in a half-width, short-depth case and running on Intel’s Xeon D chips

“The SE450 is a more powerful version of what’s in our portfolio,” he said. “This is really fine-tuned towards an edge AI type of application, especially for industries like smart manufacturing, retail, smart cities or infrastructure and the telecom industry.”

The Intel Xeon Platinum chips — which hold up to 26 cores — come with the chipmaker’s Deep Learning Boost technologies aimed at improving the performance of deep learning training and inference and features all-flash storage for running AI and analytics at the edge and delivering intelligence, according to Lenovo officials.

Lenovo had created three prototypes of the SE450 before creating the final version in the fourth iteration. The jump from 1U height in the SE350 to 2U in the new system enabled Lenovo to add more capabilities, including more I/O.

Included in the SE450 is the Lenovo Open Cloud Automation management software that until recently had been used only with data center servers. However, in September the company announced the software would be available on the SE350 and now it’s in the SE450. The software is designed to help enterprise IT teams better manage systems in an increasingly distributed environment. For the edge, the automation capabilities in the software are key, Ferland said.

Among the tasks it automates are hardware discovery, dynamic inventory management, loading appropriate versions of the firmware and operating system and validating proper installation. Otherwise, the system automatically rolls back to the last best-known state.

“You have these servers deployed in a thousand locations,” he said. “You cannot send a technician all over the world to go in and solve all those [problems]. This has to be automated in a very simple way, so you define your blueprint and you associate servers with that blueprint and off you go. After that, it’s hands-off. The automation tool will pick it up and deploy the system or roll back to the absolute known good state.”

The current labor shortage also has put a premium on automation, Ferland said. Pointing to retailers, he said that many are using cameras to capture store shelves in real-time to determine inventory — rather than have that done manually — and want to quickly process the data at the edge to accelerate the inventory process.

The rise of AI workloads is fueling demand for edge servers. However, another driver is the ongoing enterprise adoption of hybrid computing strategies.

“Some of our customers are looking at this to run as a hybrid cloud model, where so many of their applications are running on the cloud and some of them are running on-premises in the branch office, in the factory or something like that,” Ferland said. “Just because of the storage capability, that becomes a very interesting device, and you don’t need to have the full data center racked up in an enclosure. [The SE450] can be mounted on the wall, can be put under a desk or something like that.”

Like other Lenovo products, the SE450 can be bought from Lenovo or its partners or through the vendor’s TruScale as-a-service program with a consumption-based pricing model.