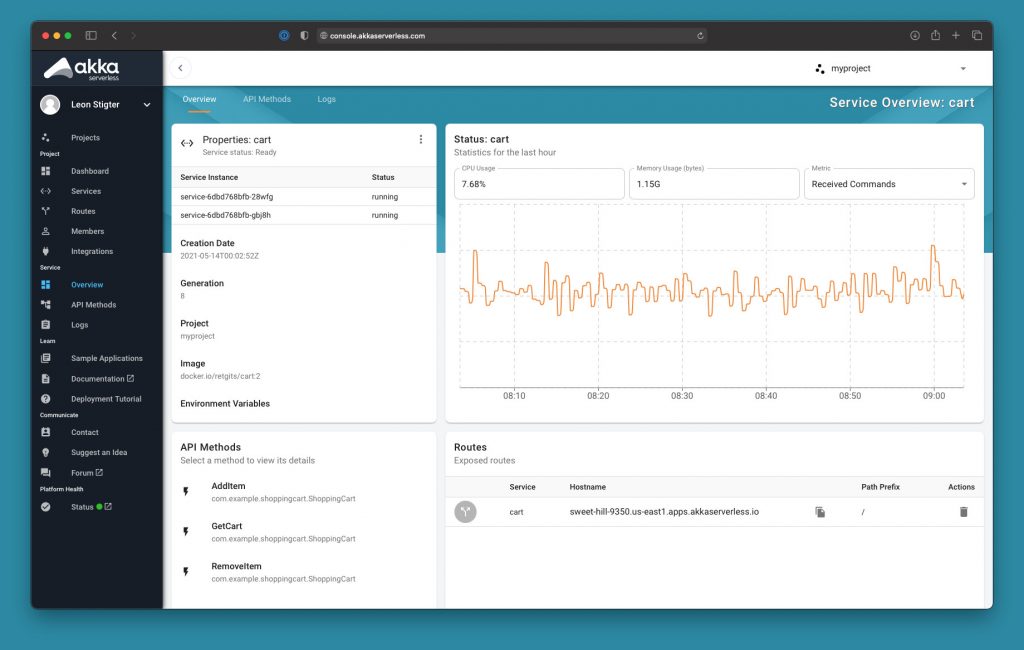 Open source application framework provider Lightbend has launched an open beta for its new Akka Serverless platform, which the company claims is the first to remove the barriers that prevent developers from using serverless to build business-critical applications.

“You probably used Akka today without even realizing it. Because it does things like power Siri and iTunes and Apple Maps, Murdoch said. “It does things like handle every single Starbucks transaction in their digital flywheel — mobile rewards, mobile ordering mobile payments, personalization is done through an AI platform. If you watch Disney+, then that entire streaming platform and all the analytics related to that are all built on an Akka-based platform. So, we know what it takes to build large-scale, high-performance systems.”

However, by bringing a stateful approach to serverless, the Akka Serverless PaaS enables developers to create high-performance backend services and APIs.

Stateful means the computer or program keeps track of the state of interaction, usually by setting values in a storage field designated for that purpose. If a stateful transaction is interrupted, the context and history have been stored so you can more or less pick up where you left off.

“So, what we’ve been focused on over the last two years is how can we take all the goodness that Akka has, and put it under the covers, and make it available to any developer so that all they need to do is basically write the business logic” for their programs, Murdoch said.

Moreover, “What we have worked out is how to best get data that is persisted somewhere,” he said. “It’s actually physically in the database. But it can operate when everything is asynchronous, and everything is in memory at runtime. So, what we’ve worked out are ways to be able to translate that into the Function as a Service model. And that’s really the big innovation that we’ve been able to do.”

With its new distributed state architecture, Akka Serverless eliminates the need for databases for cloud native applications. Thus, the product enables organizations to not be bothered with database administration, maintenance, or even APIs.

Lightbend has been working on Akka Serverless for nearly three years and has had the technology in private beta for the last three months.

Robert Howes, chief technology officer of London-based Judopay, participated in the private beta and said he sees the potential for Akka Serverless to increase the “innovation lens” at Judopay, meaning it has already extended his vision for new services the company could provide.

“It enables an interesting innovation opportunity, because we’ve got our core payments offering, and that typically gets the lion’s share of our bandwidth, our resources, our attention,” Howes said. But he said he sees a broader set of payment methods for broader sets merchants, retailers and business sectors.

“Stateful approaches to serverless application design will be required to support a wide range of enterprise applications that can’t currently take advantage of it, such as e-commerce, workflows and anything requiring a human action,” said William Fellows, research director for cloud native at 451 Research. “Serverless functions are short-lived and lose any ‘state’ or context information when they execute.”

Lightbend, with Akka Serverless, has addressed the challenge of managing distributed state at scale.

“The most significant piece of feedback that we’ve been getting from the beta is that one of the key things that we had to do to build this platform was to find a way to be able to make the data be available in memory at runtime automatically, without the developer having to do anything,” Murdoch said,

That translated into an abstraction of the persistence layer such that the developer doesn’t need to know anything about databases at all.

“So, it completely removes the database from developer consideration in terms of how the data is stored or managed, that that is a huge step forward for developers in terms of productivity,” Murdoch said.

Although the Akka Platform was previously limited to the more common Java Virtual Machine (JVM) languages such as Java and Scala, Akka Serverless is a polyglot platform that supports any programming language, Murdoch said. During the private beta there were C# developers, TypeScript developers, as well as JavaScript and Node.js developers building apps, he said.

“The platform has been designed to run on multiple clouds, and it does run on Kubernetes. So, it is using GKE [Google Kubernetes Engine],” Murdoch said.

The platform is limited to Google Cloud Platform for now, but there will be other clouds to follow, he said.

Akka Serverless is currently in open beta, with general availability expected in the fourth quarter of this year. Lightbend will provide more information on Akka Serverless during its launch webinar on Wednesday, June 16, 2021.