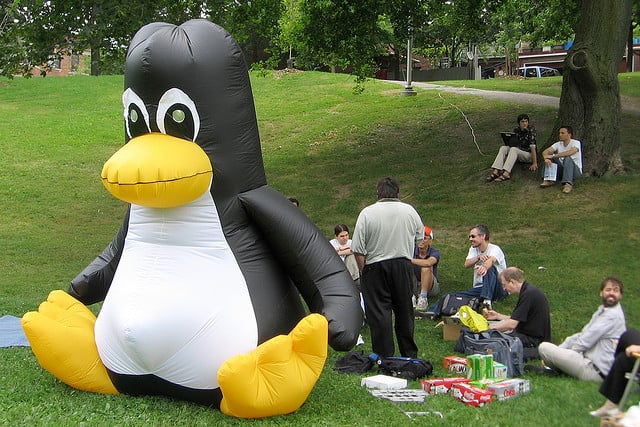 Linux kernel development is taking place faster than ever with about half the contributions being made by first-timers, according to a new report from The Linux Foundation.

The annual report, which covers releases 3.10 to 3.18, was announced Wednesday to coincide with its Linux Foundation Collaboration Summit.

Coders who claimed no company affiliation made up just 16.4 percent of contributors to the kernel, with independent consultants making up another 2.5 percent.

The number of first-timers and the contributions from the FOSS Outreach Program for Women, a mentoring project, were among the big news items from the report, according to co-author Amanda McPherson, chief marketing officer at The Linux Foundation. The FOSS program’s contributions ranked No. 13 among the more than 500 organizations participating.

A small number of contributors, however, do a large percentage of the work, the report notes.

Contributions were “all over the map” in the different subsystems, she said. But volunteers who work on the kernel tend to not stay unaffiliated.

“If I’m a computer science student and I start working on the kernel, I wind up getting a job out of that,” she said. “We saw that, too, among the FOSS Outreach Program for Women. They’re getting paid, but don’t have a traditional employer, then once that fellowship is up, they would get a job offer.”

Referring to how easy it is to contribute to the project, Greg Kroah-Hartman, who maintains the stable branch and other areas, noted at Linux Tag 2014 that contributions from the students in the FOSS project outperformed the contributions of a number of major companies. All the FOSS participants received job offers, he said, though half turned those offers down to pursue a master’s or PhD instead.

There were 18,997,848 lines of code in version 3.18, and Kroah-Hartman notes that at least two people review each one. It’s “the best-audited body of code ever,” he said, which also leaves a trail of blame.

Version 3.19 was released earlier this month, and version 3.20 is expected to bring together SUSE’s kGraft and Red Hat’s Kpatch live patching infrastructure.

“From our perspective, the increase in kernel activity is tied to the continued rise and importance of Linux as the underpinning of new IT architectures.  Specifically, Linux is now integral to almost every flavor of cloud computing, including OpenStack, the burgeoning world of Linux containers and container-based architectures and, although sometimes hidden, Linux also forms the core of the Internet of Things.  Ultimately, it is the increase in kernel activity, not the ebb and flow of individual or corporate participation, that shows the immense power that Linux holds in the enterprise world – it truly forms the backbone of computing as we know it,” said Mark Coggin, senior director of marketing for Red Hat Enterprise Linux.

Among the report’s findings:

Highlights of the kernel development include the O_TMPFILE option for the creation of temporary files, NFS 4.2 support, virtualization support on the ARM64 architecture with Xen and KVM, the “zswap” compressed swap cache and more.

The “zero-day build and boot robot” system alone found nearly 500 bugs that were fixed. There is a rudimentary self-test framework in the kernel now that will be improved in the future.

McPherson pointed to performance and storage among the areas drawing intense interest.

Meanwhile, testing is an area the Linux community has conceded needs more work and is committed to addressing.

“It’s one of the last things people want to work on. It’s more fun to work on new features than on a testing framework that just helps you get your job done. It isn’t sexy. But the kernel community has realized it’s an important and underserved area,” she said.

The report states that higher-quality patches are being merged, and the community is doing a better job of fixing regressions quickly.

The number of companies contributing code was down slightly, which McPherson says might be due to consolidation in the market. But new companies are stepping up as well. One of the latest members is media giant Bloomberg.

And just recently, the open software-defined networking project OpenDaylight, open Internet of Things I project AllSeen and Automotive Linux group announced 15 new companies are investing and contributing to their work.

Susan Hall is the Sponsor Editor for The New Stack. Her job is to help sponsors attain the widest readership possible for their contributed content. She has written for The New Stack since its early days, as well as sites...
Read more from Susan Hall
SHARE THIS STORY
RELATED STORIES
Why Web3 Needs a Real-Time Data Layer Now More Than Ever Wellspring of Creativity: Why Public Domain Matters Netlify Acquires Gatsby, Its Struggling Jamstack Competitor Gorilla Toolkit Open Source Project Becomes Abandonware How We Managed to Test the ‘Untestable’
SHARE THIS STORY
RELATED STORIES
Top 5 Internet Technologies of 2022 ScyllaDB's Take on WebAssembly for User-Defined Functions Why Web3 Needs a Real-Time Data Layer Now More Than Ever What It's Like to Run a Mastodon Server in the Musk Twitter Era 2023 Web Tech Check-in: React Performance, PWAs, iOS Browsers
THE NEW STACK UPDATE A newsletter digest of the week’s most important stories & analyses.
The New stack does not sell your information or share it with unaffiliated third parties. By continuing, you agree to our Terms of Use and Privacy Policy.