Liquid-Metal Antennas That Shape-Shift Depending on the Voltage 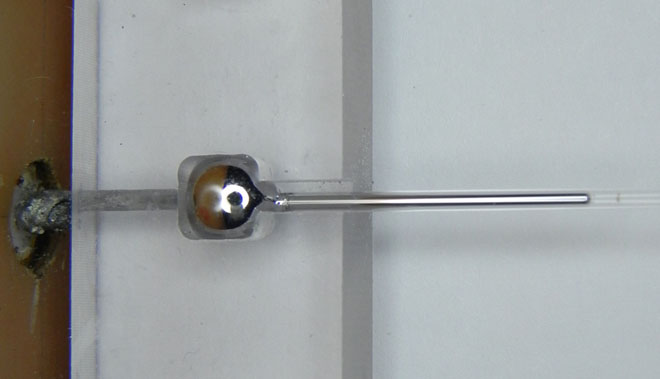 The growing diversity of wirelessly connected gadgets, wearables and the like has meant engineers are scrambling to find new ways for these devices to “tune” into the spectrum of radio frequencies. Aiming to find an alternative to conventional antennae which have a limited range due to their fixed form, researchers at North Carolina State University (NCSU) have created a liquid metal-based antenna that will automatically reconfigure itself according to the voltage applied, allowing its device to tune into a larger range of frequencies.

The team found that by sending either a positive or negative electrical charge across the interface between the liquid metal and an electrolyte, the liquid metal would change its size in response. Correspondingly, changing size will also change operating frequency and radiation pattern. According to Jacob Adams, an assistant professor in the department of electrical and computer engineering at NCSU and a co-author of the study, a positive charge will “electrochemically deposit an oxide on the surface of the metal that lowers the surface tension, while a negative [voltage] removes the oxide to increase the surface tension.”

This electrochemical property, dubbed “electrochemically controlled capillarity,” had been observed in previous experiments, and the NCSU scientists expanded upon these preceding findings, utilizing the principles of capillary action. A positive electrical current will cause the liquid metal to expand, and a negative current will prompt it to contract within the shaped glass reservoir. Liquid metals like eutectic gallium and indium were used in the experiments, with the team finding that they could modify antenna properties — such as frequency — much more dramatically than possible with conventional “monopole” conductors. In addition, they found that the antenna could tune over a range at least two times greater than systems using traditional, electronic switches.

Moreover, this particular approach has an edge over other previous experiments, which employed pneumatic pumps, contact pressure or finicky microfluidic components to sufficiently alter antenna shape and tuning capacity. So this small but significant discovery could have major impacts on how future gadgets might interconnect wirelessly, given that the exponentially growing proliferation of gadgets will soon outstrip the bandwidth currently available — with some observers predicting a “capacity crunch” as early as 2023.

A Future Component of the Internet of Things?

Liquid metal antennae may very well be part of the solution to this anticipated bottleneck, as they would be much more easily integrated in devices and would not require extra parts like pumps to work, allowing them to act as a multifunctional component that tunes gadgets into a larger, more diversified range of frequencies. Explains Adams:

“Mobile device sizes are continuing to shrink and the burgeoning Internet of Things will likely create an enormous demand for small wireless systems.”

“And as the number of services that a device must be capable of supporting grows, so too will the number of frequency bands over which the antenna and RF frontend must operate. This combination will create a real antenna design challenge for mobile systems because antenna size and operating bandwidth tend to be conflicting tradeoffs.”

This prototypical antenna could also compensate for other design flaws associated with fixed conductors, such as the much-publicized issue of Apple’s iPhone 4 dropping calls when held tightly at the bottom, due to an apparent faulty antenna design.

Researchers believe that liquid metal-based conductors would self-adapt as needed, eliminating such a problem.

Another advantage these conductors would have is that they can be easily scaled for applications large and small. These shape-shifting antennae can be integrated directly in microfluidic chips for millimeter-wide frequencies, all the way up to larger, but nevertheless still size-efficient, radar systems or defense communications installations designed for the military, which can use bandwidths of a few megahertz to tens of gigahertz. Says Adams: “While a single tunable element will probably never be able to cover this entire range, they could potentially cut down on the ‘antenna farms’ found on large defense platforms, such as on ships and planes.”

Experiments like these are shattering our notions of what a simple antenna can do. There’s more, of course: the researchers are now further exploring how they can better control the antenna’s transformation, not just in one direction, but perhaps over two-dimensional surfaces, meaning that we could someday be using multifunctional, flexible and fluid antennae that can self-transform to suit the technological needs of the moment. More over at “The Journal of Applied Physics” and “IEEE Spectrum.”