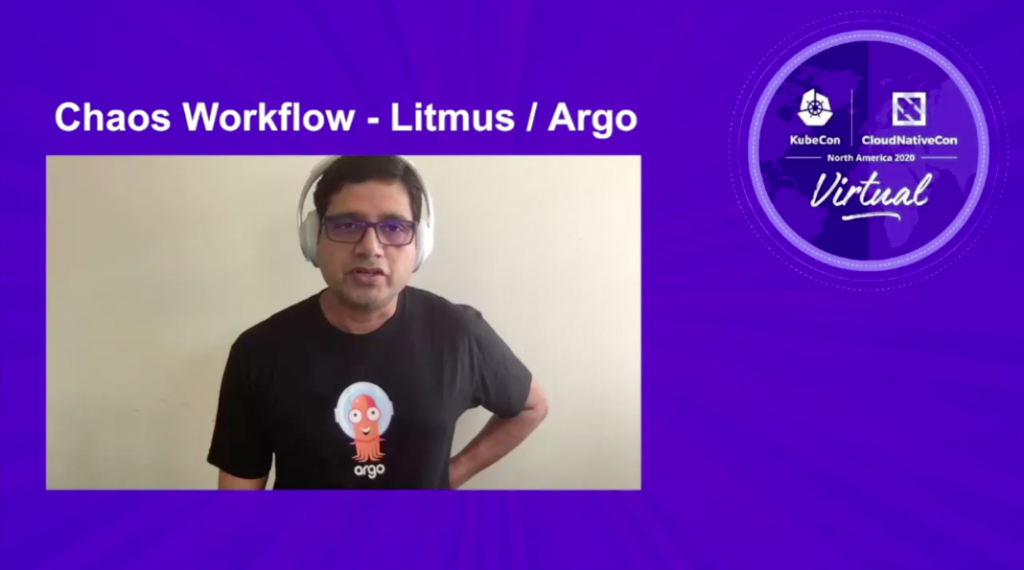 “Why do chaos engineering for Kubernetes? It’s because your application resiliency depends on other cloud-native applications.”

This is how the Chief Operating Officer of cloud native storage software provider MayaData, Umasankar Mukkara, began his talk at KubeCon+CloudNativeCon last week. In fact, he quoted that 90% of the average application’s resiliency is reliant on other applications.

He described the stabilizing effect of chaos engineering as the process of introducing a random fault into your system that is running at a steady state. If it remains steady, you’re good. If you not, you’ve found a weakness. 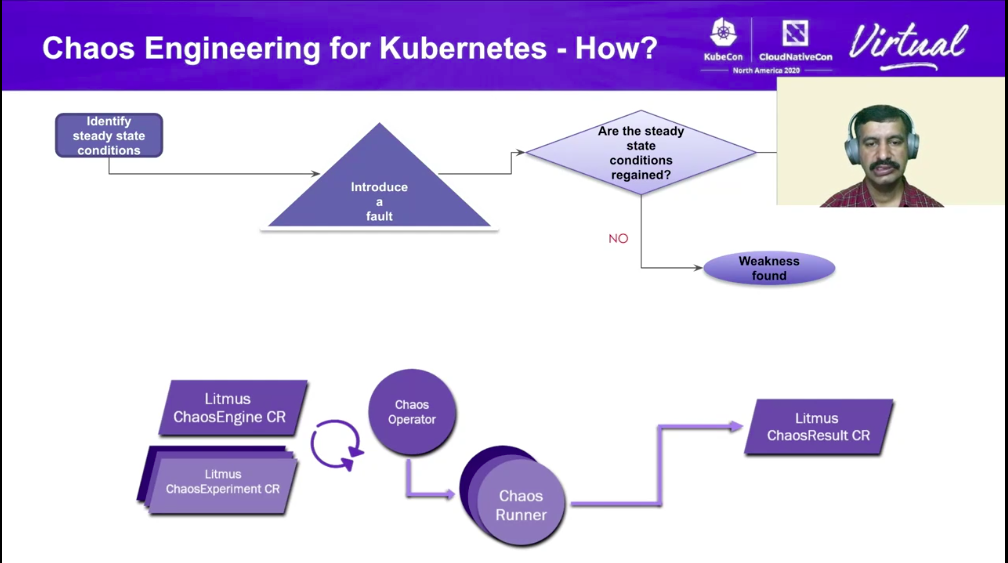 LitmusChaos “works in cloud native, totally declarative way,” Mukkara said, which means it allows you to define chaos like a custom resource within Kubernetes. This customizability works the same at the infrastructure level, at the application level, and within Kubernetes nodes, as well as other resources inside the node like memory, CPU and discs.

He went on to say that “Litmus provides all that’s required to run chaos engineering at scale across your enterprises.”

This includes the ChaosHub, which allows even the user with limited experience to introduce “off-the-shelf” chaos into their systems, onboarding in three simple steps. It now includes 22 generic experiments:

Pod delete is by far the most popular chaos template, while memory and service reliability are also used often.

Mukkara said that LitmusChaos is highly extensible and users can use the Litmus SDK in BYOC “bring your own chaos,” which they are then encouraged to contribute to the project.

Mukkara explained that “Because this entire workflow is configured declaratively you can practice chaos engineering using GitOps” where “you set up a chaos workflow which results in a set of chaos metrics and events, which are uploaded to Prometheus,” which is a CNCF monitoring tool.

These chaos workflows were initiated by the Inuit team in order to execute chaos while simulating other workload behavior in parallel.

The Intuit Developer Platform has 4,000 software developers with 2,500 services on 230 clusters — and growing. The reliability team, which Nagal leads, has been working with chaos engineering for about three years now.

Nagal and Mukkara began their Litmus proof of concept last February. In October they open sourced the Litmus plug-in infrastructure and the Litmus Python and Argo workflow, which includes the Argo Workflow, performance and chaos with Argo, and the Argo workflow via Jenkins. 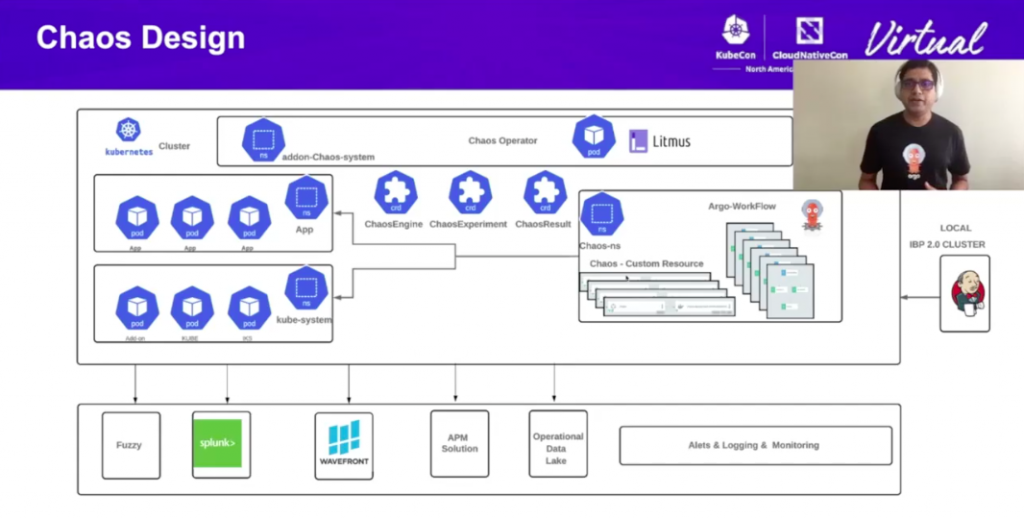 At Intuit, the team built a plugin infrastructure where all their work was done by custom resources. They are using role-based access control to target specific applications and Kubernetes specific namespaces. All of this data is then pushed to various monitoring and observability tooling, executed by the company’s Jenkins pipeline. The chaos operator will look for the custom resources.

And then these experiments were embedded within containers. They write their chaos experiment tests and put them in the Argo workflow, written in Git and integrated with Jenkins. Then Argo executes the workflow, picking the specified experiment and launching the experiment. 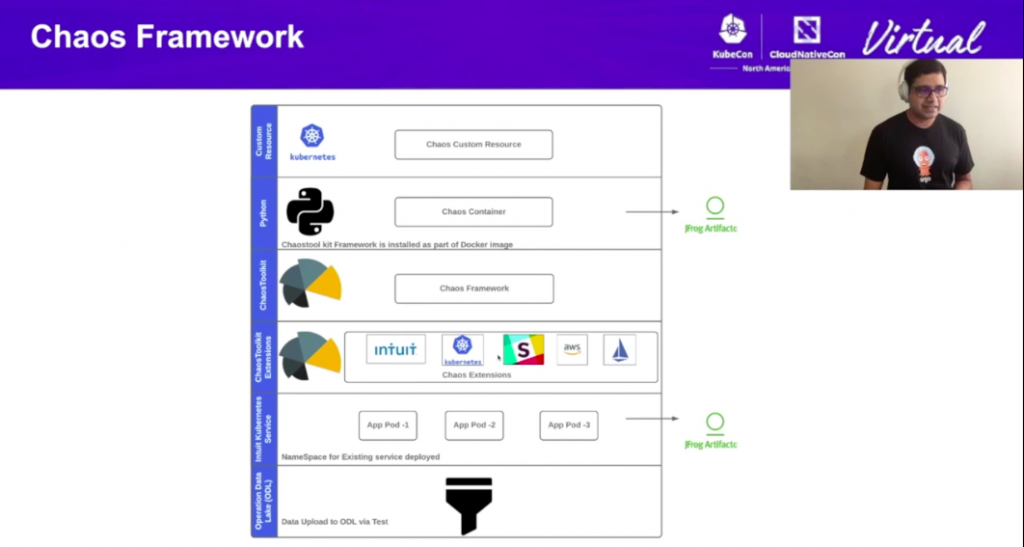 Why use these unique workflows instead of something like a YAML?

Nagal said, “Logically speaking if you really want to execute everything as part of pipeline, many scenarios, it becomes very challenging. So automation was one thing. Now Argo workflow, everything is coming as a one YAML where we can just use one of the parameters to the go-submit.”

He went on to say that since everything is code, you don’t have to maintain the different kinds of YAML across their hundreds of software clusters. It also fits right into the Intuit CI/CD pipeline with automation and infrastructure as code.

Nagal continued to list the benefits of the Litmus-Argo workflow including:

“As this whole execution is happening in a manner that is very predictable, it brings a lot of confidence in the whole set-up,” Nagal said.

The Cloud Native Computing Foundation, KubeCon+CloudNativeCon and MayaData are sponsors of The New Stack.