Look Past the Bros, and Concerns About Open Source Inclusion Remain 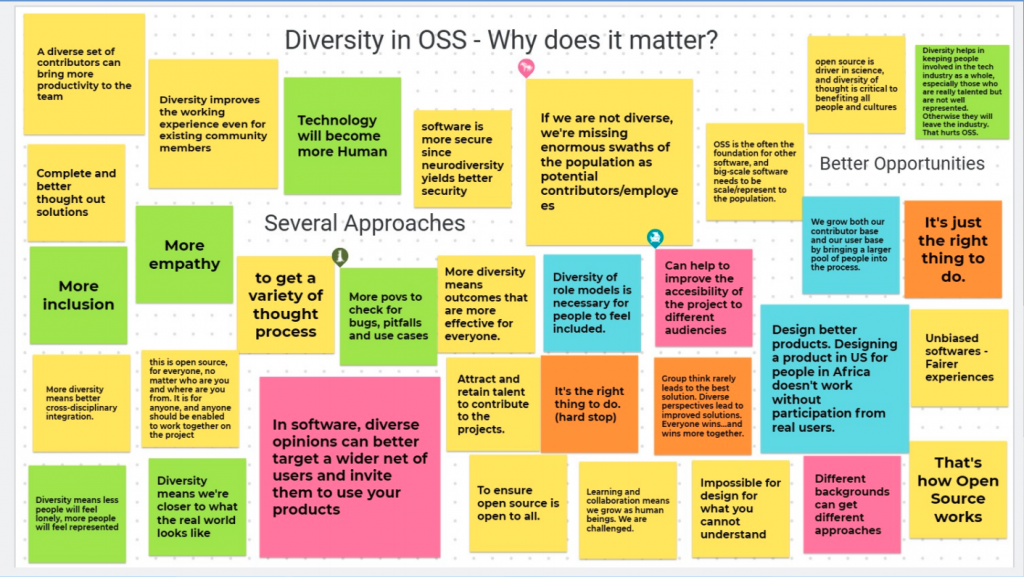 Week after week, we have been asked if GitHub’s 2017 Open Source Survey was the latest source of data about the open source community and its diversity. Now, this is longer the case. The Linux Foundation‘s 2021 “Report on Diversity, Equity, and Inclusion in Open Source” provides some updated positive and negative answers.

Only 66% of the open source community at least somewhat agree that people from different backgrounds have an opportunity to participate in open source projects, according to a survey of over 2,000 people worldwide. When asked about the diversity-related barriers they face, respondents from Asia and many younger men often could not name any and instead describe technical issues or challenges they’ve had with documentation.

This is at the heart of an ongoing debate on the best ways to increase participation in technology communities. To what extent can technology and process-oriented solutions help if so many developers and technologists believe in meritocracy? 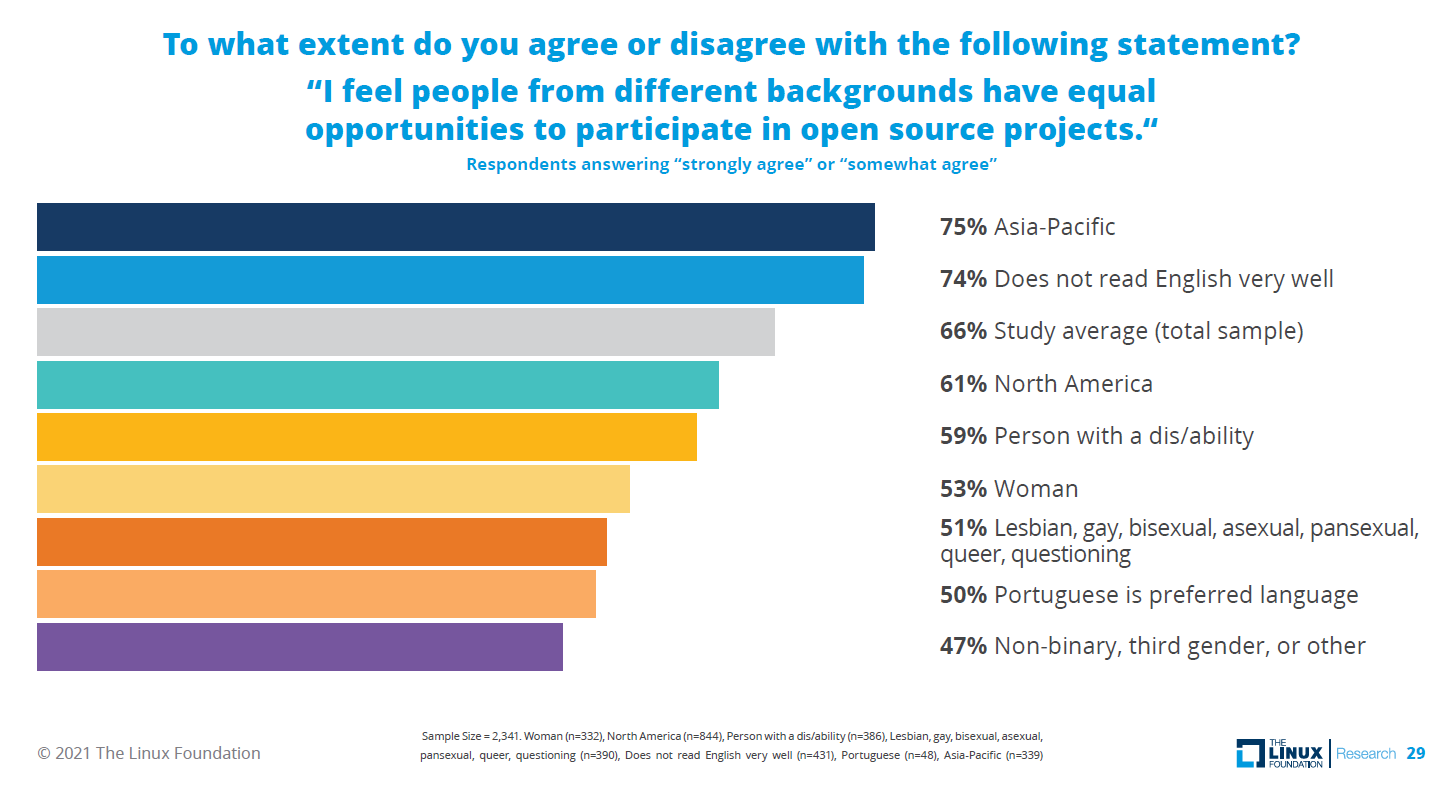 The study is based on a survey with 2,350 completed responses and in-depth interviews conducted by industry analyst Jessica Groopman and Linux Foundation Research’s Hilary Carter. I personally assisted with the project by providing data analysis that is included in the presentation deck. Groopman and Carter co-authored a 64-page report that includes recommendations that take into consideration the efficacy and limitations of current and future DEI efforts.

The report cites our article “How CHAOSS D&I Can Help Diversity in the Open Source Community” as source material. Regular readers of The New Stack’s Jennifer Riggins know all about the cultural issues, and their possible solutions, facing the open source community. Since its inception, TNS has been committed to diversity and inclusion, but we also acknowledge that technology can also equal the playing field in many regards. Here is just a sampling of Jennifer’s recent coverage:

Most of the open source community believes it is a welcoming place, but people from disproportionately underrepresented groups are much more likely to feel otherwise. The study looked at race in North America, and Black people, indigenous people and Pacific islanders, as well as respondents from Africa and the Middle East disproportionately mentioned race as a diversity, equity and inclusion as a barrier. However, in other parts of the world, religion and language and other characteristics best define someone’s background.

As cited above, two-thirds of the study believe their background doesn’t hurt their ability to participate in open source projects, but what should be done about everyone else? People with disabilities, women, those identifying as non-binary, and Portuguese speakers (mostly Brazilian) were all my likely than average to say their background is a burden. We wrote last month that 47% of those surveyed by GitHub support efforts to ensure everyone has an equal opportunity to become a developer. There may not be agreement about the remedy, but many see a need to level the playing field.

One respondent wrote, “I am not taken seriously when I use my real name in Spanish. There is a huge difference when I use an alias.” That sounds ominously similar to the experience of many women or ethnic minorities. Overall, 36% of the study had experienced some sort of stereotyping behavior based on perceived demographic characteristics. This and other types of unwanted behavior were reported more often among many underrepresented groups. For example, of the 114 respondents that identified as non-binary or third-gender, 54% had frequently or occasionally experienced written or spoken language that made them feel unwelcome, as compared to 34% of women and 14% of men.

Of course, some people may say sticks and bones may break your bones, but words will never hurt you, but let’s get real. Another finding from the report is that women, non-binary, LGBTQ+, and people with disabilities were twice as likely to have experienced threats of violence in the context of an open source project. Transgender respondents were three times as likely to get occasional or frequent threats of violence or stalking. While 3% of men have experienced an occasional or frequent threat, 9% of women and 18% of transgender respondents have. 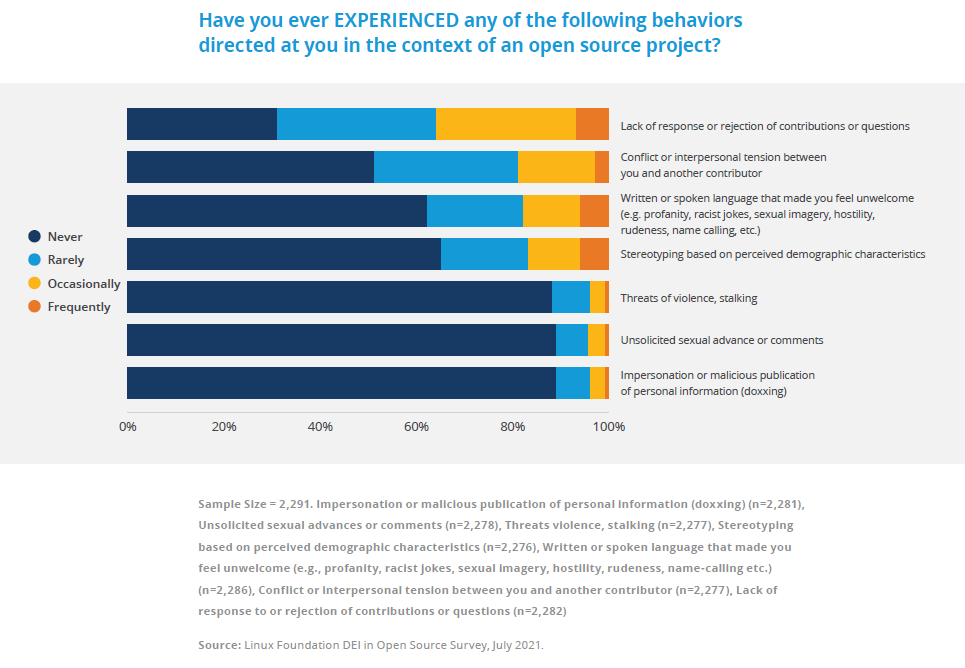 Comparison to Other Studies

Optimists will note that only 82% of the survey identified as being male, which is better than 92% in the 2021 Stack Overflow survey and 91% of men answering in GitHub’s survey. The cynic retort that the study does not represent a true picture of the open source world because participants opting to take an online survey about diversity would disproportionately be women and other traditionally underrepresented groups. Truth be told, it doesn’t matter because the 332 women in the study are by themselves large enough to be their own sample and are comparable to those identified in other studies of developers and workers in technology industries around the world.

The US government reports that 26% of adults have some type of disability, as compared to 21% of the North American survey respondents and 17% worldwide.

English Skills Are an Acknowledged Barrier

Many study participants continue to believe that open source is a meritocracy. That the best ideas win. The most talented people become the leaders. In the past, this has been used as an excuse for why there is so little diversity. Our analysis of the survey’s open-ended responses provides extremely good news indicating that this is rarely the case. However, it is also obvious that a new generation of the open source community believes that only technical barriers, a lack of documentation and language skills are holding them back.

Overall, just 8% said the general preference for English in open source has negatively affected their ability to participate. Despite this low level of it personally impacting people’s lives, language was continually mentioned in open-ended responses as barrier to open source participation. Many respondents said they did not know English when they started participating, but had overcome that challenge.

Most respondents can read and write English well. Just looking at those that completed a translated version of the survey, 28% of respondents said a general preference for English in open source negatively affects their ability to participate. Even respondents that took the survey in its translated version were adept in the language, which makes us think that complaining about English is sometimes a proxy for a larger, general complaint against American or Western culture. While only 4% of the study did not speak English well, 26% of this small group did say this is a barrier to participation. 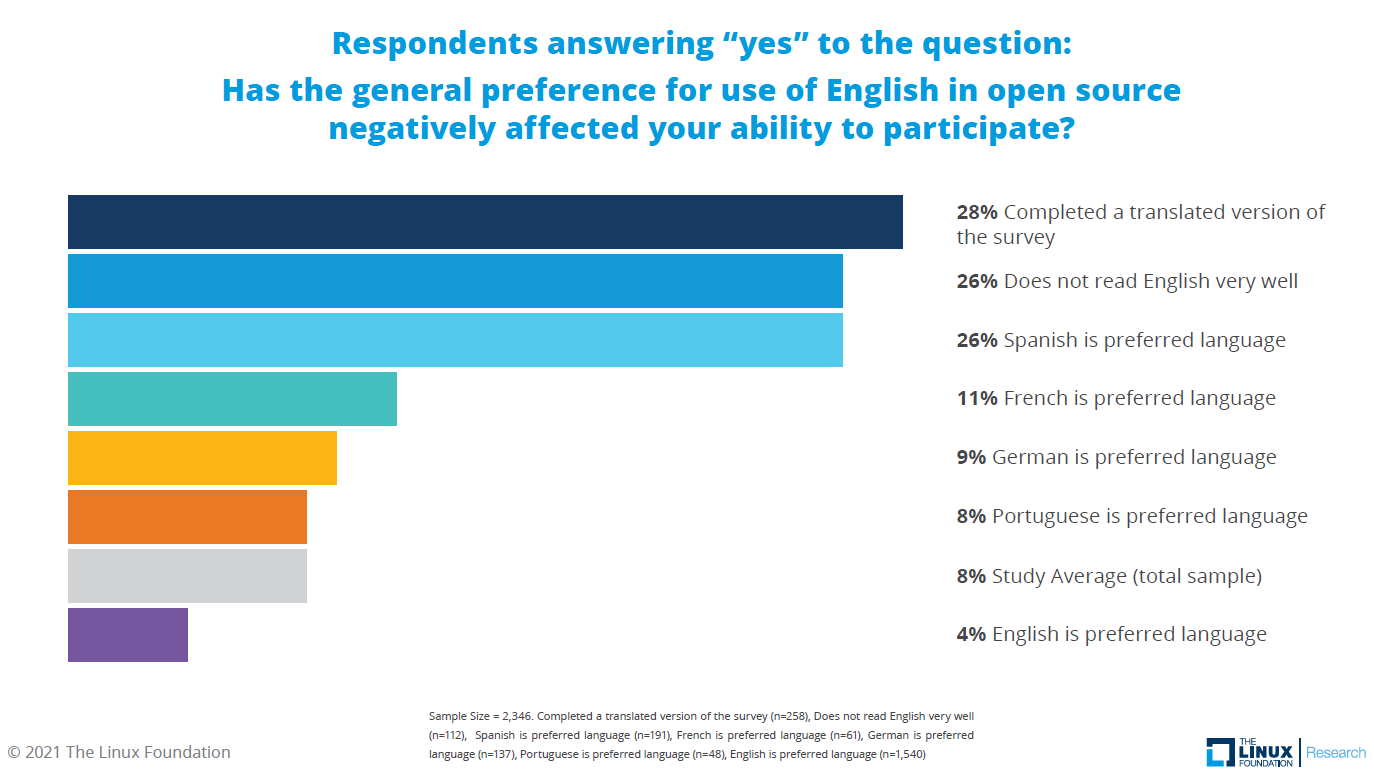 Use of Gender-Neutral Pronouns Not Widespread

Forty-six percent of US adults know someone that is transgender and 26% know someone that goes by a gender-neutral pronoun according to a 2021 Pew Research Center survey. That sounds accurate because it is only about right. While 4% of the Linux Foundation’s survey identified as transgender, only about half of them wrote something like “they/them” when asked, “What are your pronouns?” Several respondents were willing to accept any pronoun, and others had more nuanced answers.

More than two-thirds of the Linux Foundation survey describe their pronouns in the traditional manner, meaning some formulation of “he/him/his” or “she/her/hers.” Even among the 10% of the Linux Foundation survey that identified as gender non-conforming, only 45% favor this approach, with slightly less providing an answer that purposefully mentioned “they” or “he and/or she” or some combination like that.

Codes of Codes, Documentation, and People with Disabilities

Included below are three more charts that highlight important topics we will write about at a future time. Note that the use of a slash in the word “dis/ability” is non-standard but justified by citing authors of a book about disability studies and critical race theory. 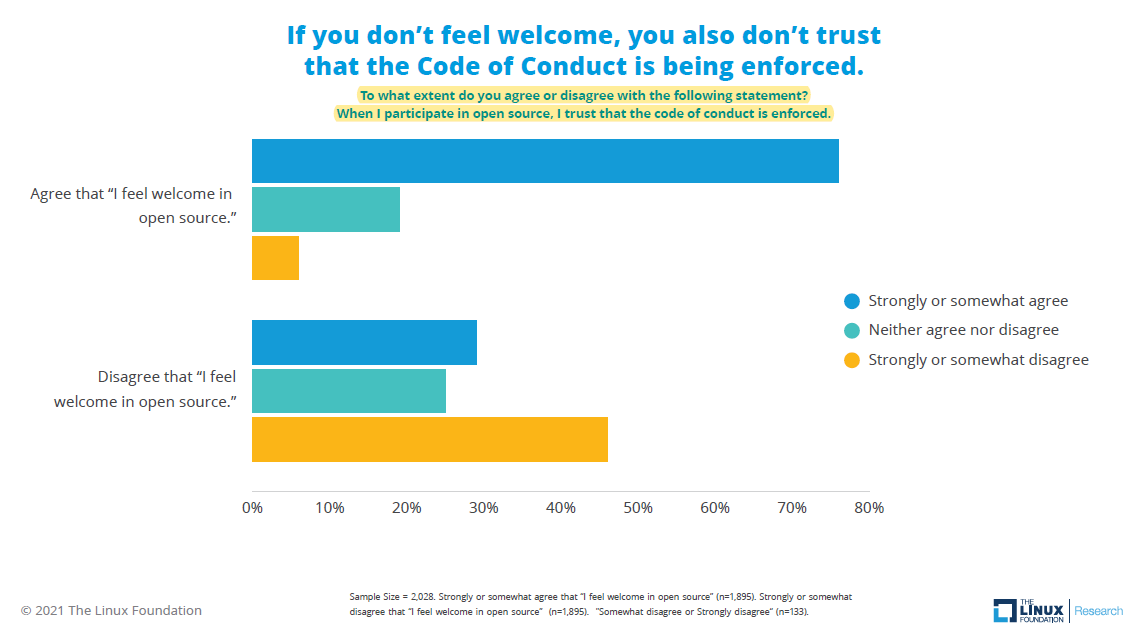 70% agree when they participate in open source that the Code of Conduct is enforced, while 9% disagree. Among those that don’t feel welcome, 29% agree and 46% disagree. 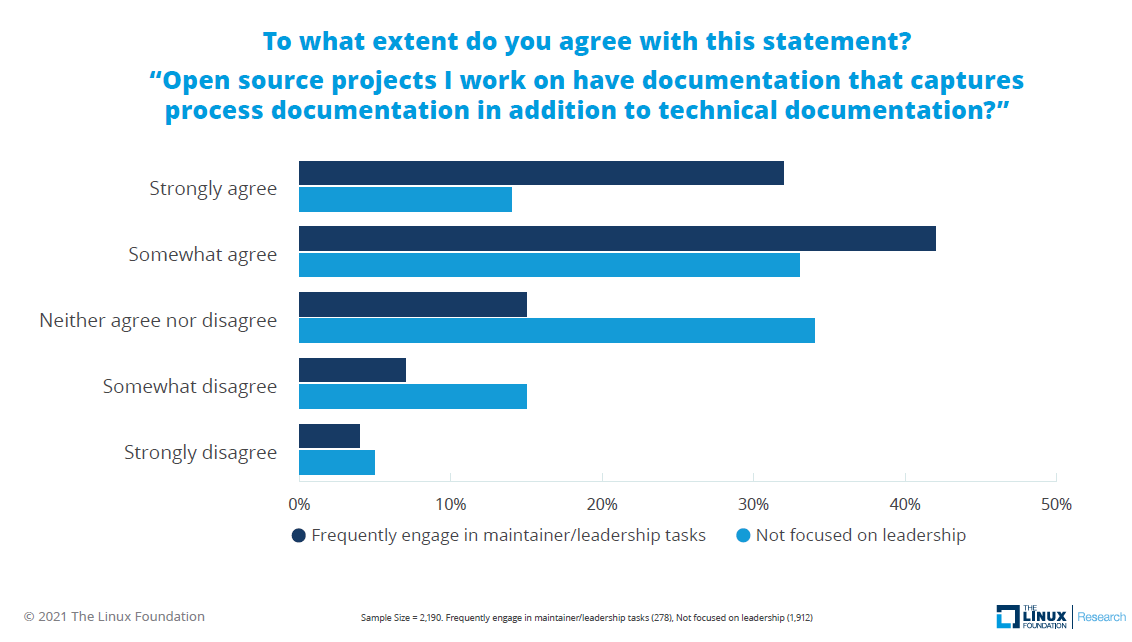 Fifty percent agree that the processes for projects they work have documents, while 15% disagree. Not everyone is a maintainer or leader in open source, but 74% of this group say their process documentation is captured. 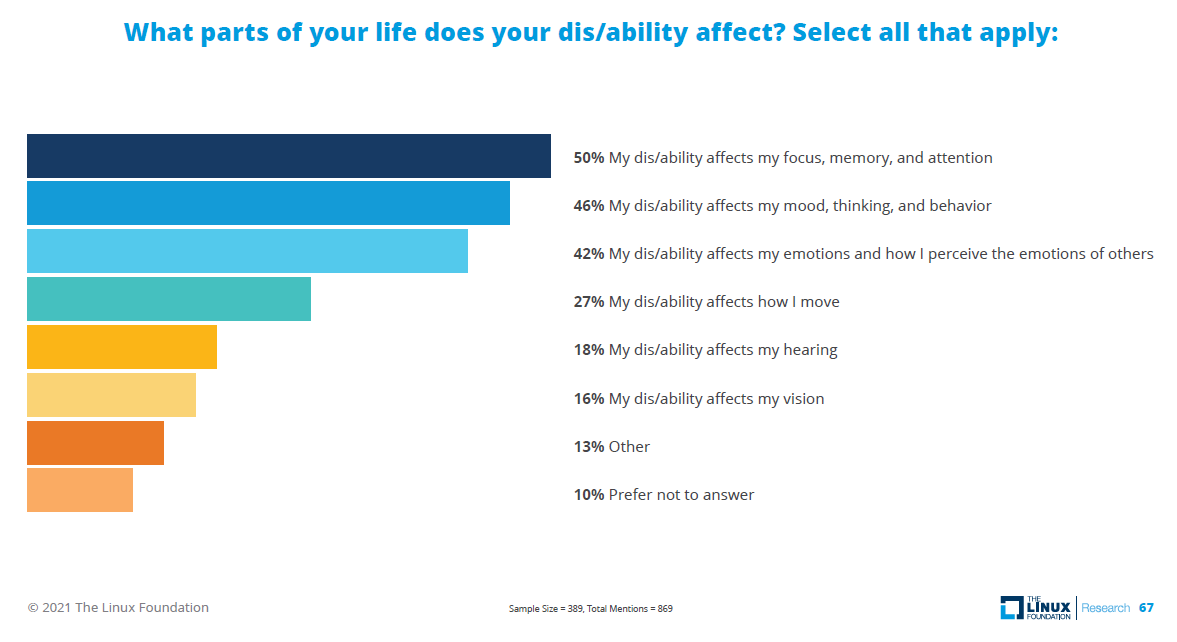 Seventeen percent of respondents identified as a person with a disability. For the purpose of this survey, dis/ability is defined as a long-term physical, mental, intellectual, or sensory impairment which, in interaction with various attitudinal and environmental barriers, hinders your full and effective participation in society on an equal basis with others. 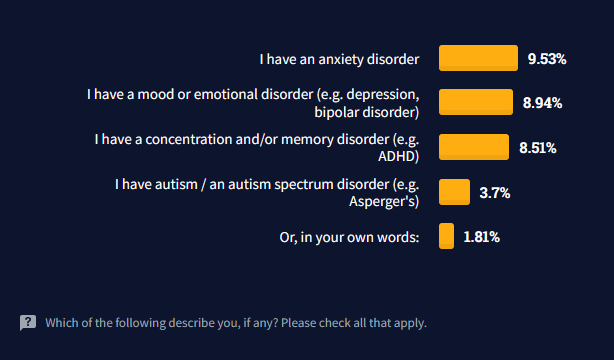 This chart was described as being about mental health in Stack Overflow’s 2021 Developer Survey. A separate question was asked about disabilities.