Made for Makers: Modulo, the Programmable Way to Build Electronics 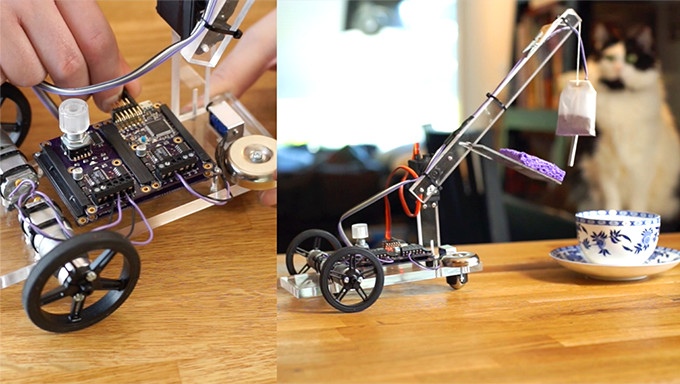 Wouldn’t it be great to be able to build your electronic projects without having to worry too much about the microcontroller pin numbers or how you connect different types of sensors?

Toy and educational-focused projects are usually extremely intuitive, but not always very powerful or robust. You play with them for a while, then take them apart and put them away, much like a Lego set.

Maker-focused projects are powerful and hold up well to use, but the builder spends a great deal of time and effort designing the circuits, assembling parts, testing and debugging. This makes it a challenge to get the project to completion.

Modulo is designed to bridge the gap between being able to design projects that are powerful and useful while not having to build everything from scratch. It modularized the various sensors, actuators and devices with their own little microcontroller that snaps onto a prototyping board and connects each component over the I2C bus.

According to Founder Erin Tomson, Modulo is a software approach to hardware. Tomson said the company has taken the concepts of the programming world, like object-oriented design and abstraction, and applied them to hardware. Each module is a separate object with its own low-level handling microcontroller that connects to others through a high-level application program interface (API).

There Must Be A Better Way

As a hobby, Tomson wanted to learn about control systems by building a small, two-wheeled “Segway-style” balancing robot. What she thought would just take a few minutes turned into a laborious project of reading data-sheets, slogging through the design of a circuit, breadboarding it, and finally transferring it to a ProtoBoard. She made mistakes, fried a few components, and the whole process turned into an adventure in electronic design, instead of control theory and robotics. 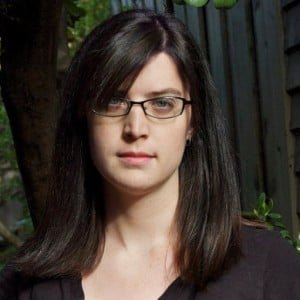 She thought there must be a better way, and so she came up with the Modulo concept.

Putting a nano-microcontroller on each module makes for a nearly unlimited variety of configurations. The main controller is able to “discover” which other modules are connected, and offload resource-intensive tasks to the modules themselves. For example, the OLED display takes care of actually drawing the text and shapes, thus freeing up the main microcontroller to choreograph the content of what’s displayed on the screen. The concept is similar to a GPU in a traditional desktop computer.

Logically tying all the modules together is done in the software through the magic of high-level APIs and the I2C bus. Tomson explored other interfaces, such as a UART implementation, in addition to SPI and SMBus; however, they either needed additional hardware lines or were too complicated for the microprocessors she wanted to use. I2C was efficient, available on inexpensive hardware, and would work even though I2C wasn’t specifically supported by a chip. Most current Modulo modules use the ATtiny 841 microprocessor. The color display uses the Atmel SAM D21, while the main Modulo controller uses the ATMega32U4.

Running an ATMega32U4 makes it easy for Modulo to integrate into the Arduino community. Other microcontrollers, like the Particle Core, Raspberry Pi and others, work with Modulo components through libraries and APIs. Tomson’s aim is to help users find great uses for Modulo and keep it is easy to use.

From Graphics And Systems Expert To Hardware Manufacturer

Looking at Tomson’s groundbreaking software-approach-to-hardware concept would explain her jump from being a successful computer graphics and systems expert to hammering out hardware.

Tomson majored in computer engineering at the University of Michigan, with a primary focus on computer graphics, data analysis and electronic art. Near the end of college she applied for a job with Pixar and landed it in the field of character shading. Her assignment was to work with artists to develop the color, texture and surface qualities of the characters in the blockbuster movie “Nemo.” She did similar work on “The Incredibles” and “Ratatouille,” before moving on to the internal software development group. She ultimately wound up running projects as a lead engineer in the group and worked in a bunch of different areas, including inverse kinematics, playback, media management, scene graphs and shading.

After a dozen years developing very large, proprietary software for a huge corporation, Tomson decided she needed a change. She noticed the incredible progress made in microcontroller hardware, while significant issues persisted in other areas.

Combining her endless fascination for electronics and computing with her background in software and systems seemed like a natural next step in her career evolution. She felt that tackling some recurring problems, such as making projects easier to put together, would provide her with lots of opportunities to contribute.

Her gamble seems to be paying off because she’s secured interest from a variety of groups. Educators said that breadboarding is a huge stumbling block when introducing physical computing in the classroom. Existing modular systems are just too limiting. Tomson said that reactions to Modulo from kids at Maker Faire were fantastic, although she hasn’t drafted any into beta and testing programs yet. The company is investigating visual tools, such as Tickle, to make developing projects easier for people just learning programming.

Sorting out the manufacturing process is the biggest hurdle right now for Tomson. As a maker at heart, she says she easily figures out how to make just one or two of something. Designing for someone else with the intent to make thousands of somethings is an entirely different challenge. Tough realities present themselves with inventory, supply chains and volume pricing that just don’t show up when developing software.

Modulo is up on Kickstarter, so be sure to check out its page if you’re interested in backing the company. Tomson wants to develop a thriving community around the Modulo platform and has several engineers and developers helping her. Feedback has been positive, and she’s applying lessons she learned at Pixar to making hardware projects easier to build.

Rob "drtorq" Reilly is an independent consultant, writer, and speaker specializing in Linux/OSS, physical computing, hardware hacking, the tech media, and the DIY/Maker movement. He provides a variety of engineering, business and special project services to individual clients and companies....
Read more from drtorq
Share this story
RELATED STORIES
Why Jump from the Safety of a Big Tech Job into Risky Web3? How to Bridge the Developer-Designer Gap Entrepreneurship for Engineers: Founders Need Community, too Charity Majors: Taking an Outsider's Approach to a Startup A Redesign for The New Stack
Share this story
RELATED STORIES
Tackling Developer Onboarding Complexity A Technical Guide to Burning Down a Troll Farm Adobe's Internal Developer Platform Journey and Lessons How Can Open Source Sustain Itself without Creating Burnout? How Idit Levine’s Athletic Past Fueled Solo.io‘s Startup
THE NEW STACK UPDATE A newsletter digest of the week’s most important stories & analyses.
We don't sell or share your email. By continuing, you agree to our Terms of Use and Privacy Policy.