The Five Most Addictive Indie Games from MAGFest 2017 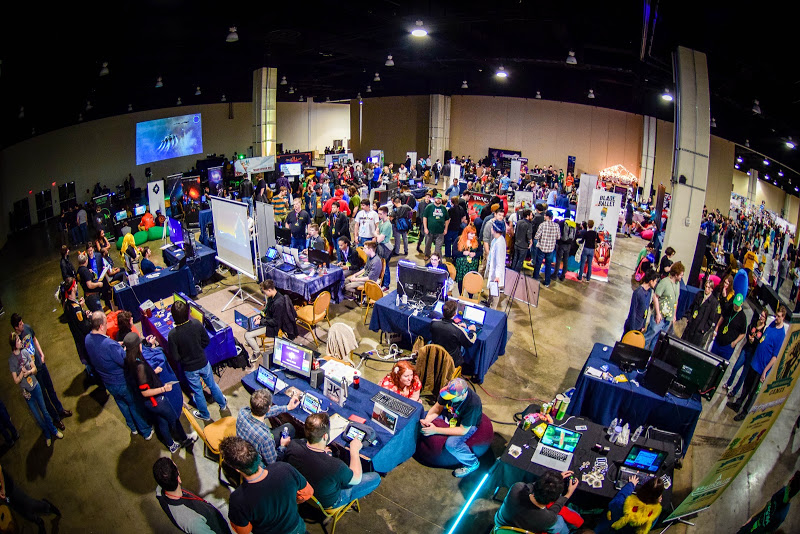 So, you’re an indie game developer who has poured heart, soul, and life savings into building what you hope is The Next App Store Miracle.  Your gameplay is fast and furious, your graphics sizzling, and your in-app merch queued up and ready to start pulling in those phat stacks. You are certain you’ve built a runaway hit along the lines of OG mega game Candy Crush (still bringing a paltry $5 million+ in worldwide revenue each month) or Clash of Clans (the category killer game in December 2016, at $12.3 million in worldwide revenue).

The only problem: getting people to notice — i.e., buy — your magnum opus. This is no easy feat, when there are currently over 6,000 games available for download in Apple’s app store, or when your brainchild has to compete with the nearly 9,000 other games currently offered on Steam.

Q: What’s an ambitious indie developer to do?

A: Head to MAGFest.

MAGFest is an annual gaming and music festival run by gamers, for gamers. The gathering takes place in Washington, DC, each January, with upwards of 20,000 attendees enthusiastically binging on four days of nonstop video gaming, concerts and geek culture.

MAGFest is run by a nonprofit organization with the sole purpose of furthering the appreciation of all things gaming — meaning it is most definitely not an industry event. No corporate sponsors, no hyper-crowded “expo” hall where the hyper-expensive micro booth you ransomed your last credit card to pay for gets lost amid literally thousands of competing products. Fans flock to MAGFest to play as many games as they can possibly cram into 96 hours of Red Bull-fueled madness.

In short, it’s the ideal environment for getting your creation in front of thousands of eager eyeballs.  MAGFest 2017 offered the MAGFest Indie Videogame Showcase. This year, more than 50 indie game studios were invited, via a juried submission process, to set up formal displays of their wares.  Even developers who missed the August 2016 application window — possibly your game didn’t even exist last summer, amirite?! — for formal show slots can show off their creations. MAGFest offers “QuickPlay” tables for developers to show their warez, pop-up style, in a two-hour demo slot.

And gamers love new games. Despite a 500-terminal LAN room open 24/7 for competitive video game tournament play (including cash prizes), the ultimate retro arcade where hundreds of vintage games are running on free play (so you don’t have to keep asking your mom for quarters to play more Galaga), and a ballroom full of every console game oh, ever, for players dying to get their Atari 2600 Asteroids on — despite this splendiferous smorgasbord of establishment game choices, the Indie Room Of Untried Options also drew steady round-the-clock crowds all weekend.

Your humble correspondent did her level best to play every single indie offering. I didn’t quite make that goal — a few game systems were crashed or broken, and some were just stupid — but I managed to get hands on most of them for at least a few minutes (tough job, but somebody’s gotta do it).  Here are a few favorites from the weekend, both the ones I most enjoyed personally and games that drew large crowds despite long wait times to play.

1: Nothing Good Can Come From This, Cartwheel Games 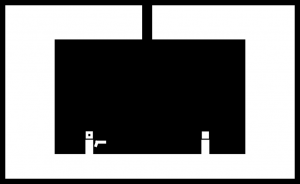 Deceptively simple but far from easy, Nothing Good Can Come Of This may just be the ultimate player-vs-player shooter game. The maker’s description reads:

Two players are trapped in a nearly featureless room. After hours of waiting in near-silence, a gun drops from a hole in the ceiling, falling between them. What is this supposed to mean? What are they expected to do next?” Well, honestly, your stick guy scrambles like hell to grab the gun before the other stick guy gets it — and then struggles to hang on to it while waiting for a bullet to eventually also drop. If you manage to get both bullet and gun, you get one shot to take out your opponent. If you hit, game over. In the much more likely event that you miss, the game starts over again. And again. And again.

The utterly minimalist graphics are a complete departure from the crowded, busy screens and polychrome colors of current gaming aesthetics. There is the white room, two black lines representing the players, and a rudimentary L-shape representing the gun. Players can move anywhere in the room, jumping, flying and spinning out of the way of harm — or directly into it, since knocking the gun from the other player’s grasp is the only way to gain control of the weapon.

The stark aesthetics of NGCCOT underscore the game’s point: it’s all about unalleviated one-on-one combat. It’s a very addictive gameplay experience. I watched as hardcore gamers first approached the setup visibly scoffing at NGCCOT simplistic visuals — and then got in line over and over again to play, and replay, and re-replay…

The term “hastilude” comes to us from the Middle Ages. It refers to different types of combat games, the most well known of which is jousting — you know, knights on horseback with lances. Hastilude the video game takes the knights-on-horseback thing and adds plenty of twists. Players spawn into game arenas already seated on flying dragons, with the goal of knocking other players from their own mounts while trying to score whatever goal exists for that level.

Dismounted knights are far from helpless, however;  players have weapons, tricks and items that can help them steal another player’s flying dragon.

The bright, cartoony graphics are fun, though nothing groundbreaking. Multiplayer combat is the draw here, ranging from simple but fun melee fights to strategy-packed “long game” competition. For example, players can construct and hide traps, or bounce projectiles back to strike the shooter, even banking shots off arena topography. Fluid multiplayer dynamics mean the strongest can suddenly become the weakest as alliances form, then mutate, then shatter. Hastilude ain’t over til it’s over.

Sadly, Hastilude is still in alpha — game tweaks based on player feedback at MAGFest will be rolled into the beta version. Hastilude is set for full roll out in fall 2017. Interested players can wishlist it on Steam.

3: Dr. Spacezoo, or How I learned to Stop Shooting, and Save the Animals, by Smashriot LLC

So you’re hanging out in this zoo when suddenly it gets taken over by an evil AI entity (Don’t you hate it when that happens?). Somebody has to rescue all the animals and annihilate the boss before he wipes out all the zoo inhabitants. Looks like it’s gonna hafta be you, Ace. Welcome to the world of Dr. Spacezoo, or How I Learned To Stop Shooting and Save The Animals.

Dr. Spacezoo has simultaneous play for up to four players, though in my experience it was more fun with one. At most, two. It’s an extremely chaotic setting, so more players trying to shoot the boss equals extreme likelihood of accidentally shooting an ally, or one of the cute lil’ animals, and then you gots to feel bad. The look is retro 8-bit graphics, the simplicity of which suits the agile, responsive gameplay. No in-depth story development here; just shooting the right things and — more importantly — NOT shooting the wrong things. This calls for a surprising amount of skill and self-restraint since one of the blocky space lions always seems to lope in front of the big bad AI boss just when you’ve finally lined up that killing blow shot from the good ol’ photon blaster. Also, there’s a really ripping soundtrack, further driving the frenzied game action.

Dr. Spacezoo is available for Mac, Windows or Linux, and includes device mapping so you can play using Xbox, Playstation, or other gaming console controllers. Which I strongly recommend. Available for $9.99 on Steam or Itch.io.

Death By Audio is not a game, nor is it a game dev studio per se. It’s more a value multiplier for indie games, a place where tech crashes into art and produces geeky grand fun. Death By Audio was a legendary music and maker space in the Williamsburg section of Brooklyn that in 2014 became a victim of gentrification, that old story. The landlord kicked out the DIY music space to clear the way for Vice Media’s new headquarters.

Artists who lived and worked in the music space, most particularly electronics tinkerer Mark Kleback, had built a series of handmade video game consoles to entertain audience members between music sets. The consoles, based on classic arcade shells, showcased the creations of New York’s burgeoning indie game developers. The communal roots of the DBA arcade are mirrored in the gameplay of its offerings: these are multiplayer experiences, meant to enjoyed with friends, rather than conquered alone. It’s less frantic button-mashing and more a little collaborative world-smashing between friends. 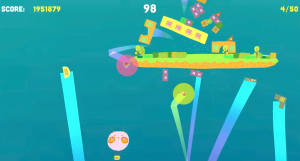 These days, Death By Audio Arcade takes its show on the road to places like MAGFest. The pop-up installation of about a dozen bespoke console games includes games like the kaleidoscopically frenetic Slam City Oracles. Full of chaos and explosions, the point of Slam City — made by Riot Grrrl Gaming — is for two players to slam into everything, over and over, to create as much destruction as possible in two minutes. Cathartic, oddly wholesome good fun. 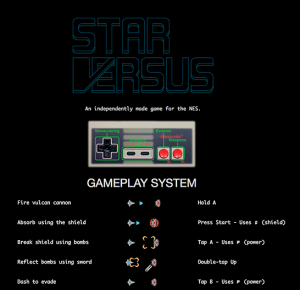 Star Versus, made by Studio Dustmop, is based on the venerable Nintendo Entertainment Systems. Star Versus was first homebrewed on a Nintendo cartridge before being ported over to its DIY arcade cabinet. And, in fact, the only way to play Star Versus is on one of the original NES consoles or in the DBA Arcade. Which is both ultra cool and a little frustrating, because Star Versus’ hyperkinetic one-on-one space battle action is all about outcompeting and outmaneuvering your opponent. I found it quite addicting, as did other players in the DBA arcade. It says a lot about this game that, rather than standing quietly whilst staring at our smartphones — as was the case for most MAGFest queues — waiting players clustered up close cheering (and sometimes jeering) the action.