Maintaining a Legacy: Who Will Repair Our Pinball Machines? 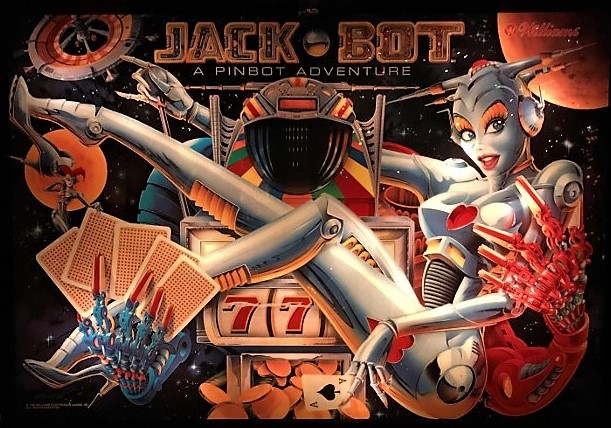 Maintaining a legacy technology is difficult — but it usually starts with the same approach: Determination, commitment, and some dedicated people who like to fix things.

And one of the best examples may be those unsung repair technicians who are keeping alive the world’s pinball machines.

“You think it’s a pain getting a repairman to come fix a knob on your washing machine?” wrote the Wall Street Journal in 2010. “Try finding someone who will replace the flipper assembly on your pinball machine.”

Clay Harrell, who writes the Pinball Repair Tips & Tricks webzine, told them that “Nobody sells a working pinball machine. If it was working, they wouldn’t sell it. If you buy one, it’s always broken.” And the bigger problem was maintenance, according to one pinball technician who talked to the Journal. “I always hear people say, ‘I bought a machine and I can’t get a repair guy to come out.'” At the time a directory of pinball repair technicians listed just 750  — in all 50 states — charging up to $150 an hour.

And that was eight years ago…

So where are we now? This week the technology site Motherboard interviewed two men they’re poetically calling “the last pinball doctors.” In a new online video series, they talked to bar owner Jon Ehrlich, who repairs his own pinball machines at Jackbar in Brooklyn. Ehrlich insists that “pinball machines break down daily.” So besides doing his own repairs, Ehrlich also has his own stash with thousands of dollars worth of replacement parts. There’s spare screws, flipper bands, light bulbs, and fuses — but it’s all become a necessity, he says, because in the entire tri-state area, there’s a total of three repair people that he can think of.

One of them is Mike Hooker, who says part of the problem is that pinball machines were really only built to last five years. “They were built to suck the quarters out of people’s pockets, and then get tossed.” People would want to see new machines, “So they didn’t make ’em to last. It’s amazing they last as long as they do.”

The entire pinball industry was nearly “disrupted” out of existence by the arrival of video games, according to one pinball technician I talked to in California. “Pinball machines were expensive, they took up a lot of room, and when they broke they were a little more complex to fix.” Plus, video games had more novelty.

So by 2010, the Journal was surveying what was left. “Thousands go up for sale — used — on the Internet and at pinball shows from Niagara Falls to Kalamazoo. Buyers, mostly middle-aged men, cart them home in hope of reliving moments of youthful wizardry playing the silver ball.”

That’s still happening, according to repair technicians I talked to in California. “A lot of those games go right into people’s homes,” said Christopher Kuntz, who bills himself as “the Pinball Pirate.” In August he even got a phone call from Stern, the pinball manufacturer, asking if he’d want to become a dealer.

“I know plenty of people who have 10 games at home,” said Kyle Spiteri, the 28-year-old pinball enthusiast who’s become Kuntz’ assistant. “I have four at home. Lots of people have these home collections. That’s kind of where pinball ended up. ”

Today, right next to Silicon Valley, the city of Alameda California has its own pinball museum, a 501c non-profit. The Pacific Pinball Museum is “dedicated to the preservation and promotion of this unique part of American culture.” And to keep it running, every week it shuts down for a day for a team of volunteers to work their magic. 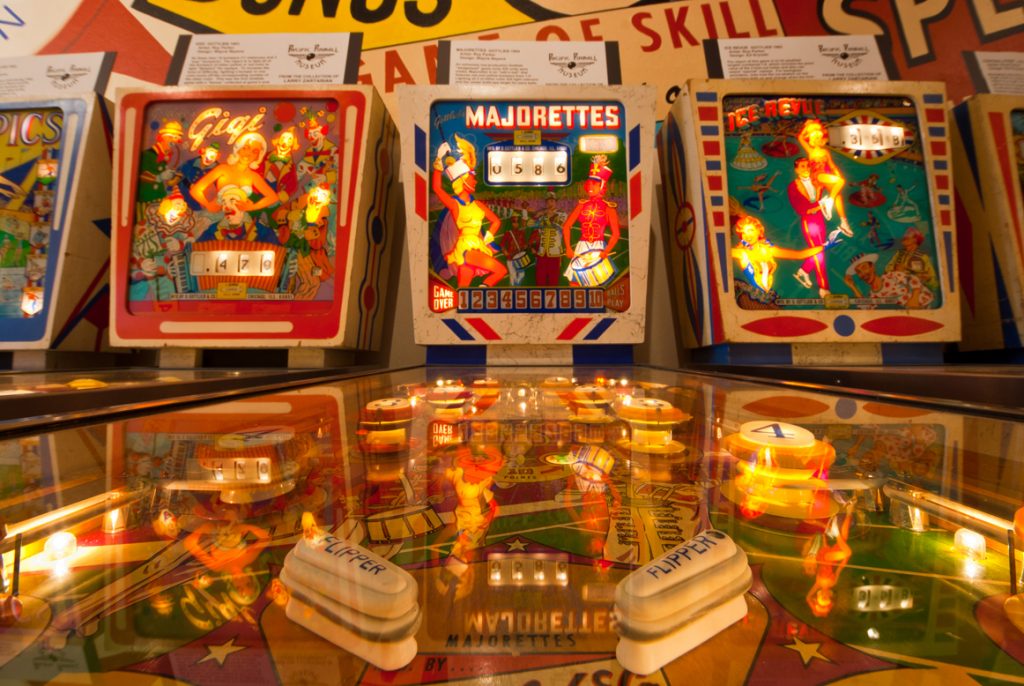 Photo by Michael Moore for the Pacific Pinball Museum

“Every Monday, we show up, we fix games,” and eat pizza, said Kuntz, who’s been repairing pinball machines professionally for 30 years.

Kuntz agrees that pinball is “enjoying a bit of resurgence. But the pipeline for pinball repair technicians has been shrinking. “Most repairmen worked for an operator — somebody who buys the machines and puts them in the 7-Eleven or the pizza parlor and hopes that people put in quarters. So you got a lot of experience. Now there are fewer arcades and fewer operators,” he said. “Where will they come from? Basically, they’re going to have to learn as they go.”

When I ask Kuntz how many technicians there are now, he makes a good point: “How would you count them? Who’s a technician and who’s not?” Some technicians today are even getting their clients through word of mouth. “There’s no formal training or anything. With a contractor, you have to pass a written test… With pinball, anybody can say ‘I can fix those.'”

Photo by Michael Moore for the Pacific Pinball Museum.

Kuntz says it’s like repairing anything else. “You get the manual out, read that first, and you can fix things. It’s no different than a car really. It’s got a bunch of inputs and bunch of outputs.” But even then there are issues since Kuntz says you can’t always trust the schematics the manufacturers created for their pinball machines. “The stuff the factories have was always stuff that was written before the fact… They’re writing that document before they’re creating the system.” But fortunately, now there’s a vast additional resource — the information available online.

And Kuntz has his assistant, Spiteri. “I was just blown away,” Spiteri said of meeting the Pinball Pirate. “The dude was the smartest person I ever met. I just started shadowing him. I’d come over to his shop and worked with him once or twice a week… Chris has dedicated as much of his life to pinball repair as I have been alive.” Kyle volunteered at the museum — “I learned from watching and volunteering” — and eventually learned enough to work as Kuntz’s assistant.

Spiteri describes pinball as “something I’ve loved forever. When I was a little kid there was a bowling alley close to where I lived, and my friends and I would always ride our bicycles down there… There was just something really magic about pinball.” 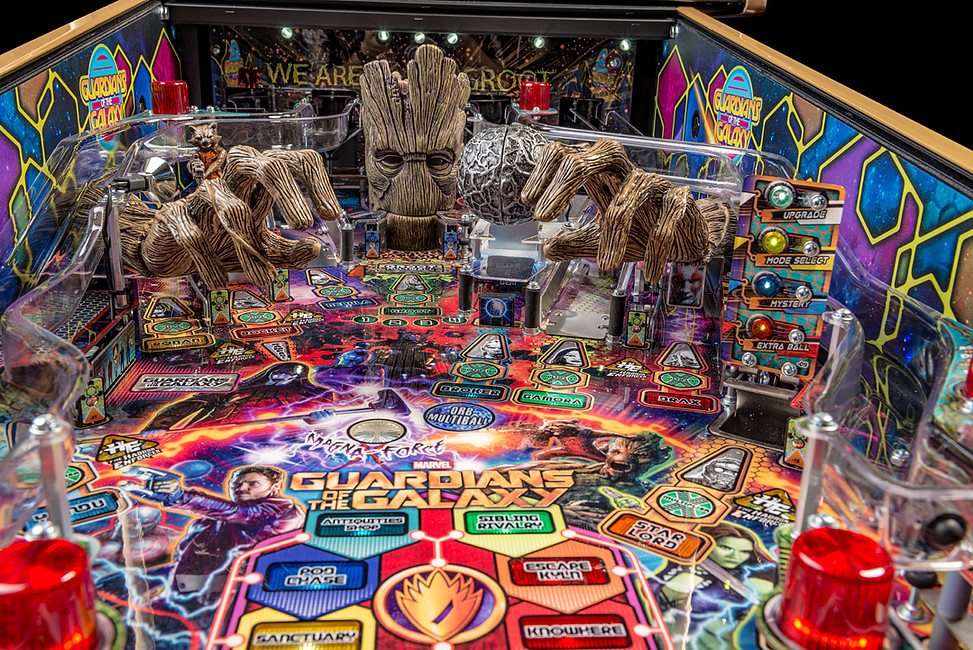 Marvel Guardians of the Galaxy pinball machine. Photo from Stern.

So is Spiteri worried about the future of pinball repair technicians? “I feel like there will be a time when there will be people who don’t know how to repair components. But we can replace them.” He points out there are now companies that re-manufacturer the replacement parts that you need  — even for machines that are 70 years old. “They make new drop targets, they make new spinners and inserts for the playing field… It’s a very niche industry, but there are people still making these things”

And that’s just the beginning. “It’s now possible to make a super high-definition scan of the playfield, touch up the artwork in Photoshop, and then go through the correct methods to reproduce the entire playfield.”

It’s a stunning example of using new technologies to preserve old ones.

And some people are taking it to the next level, by creating their own “homebrew” machines, repurposing old broken games with new modern-day themes. For example, someone took a 1979 “Flash” pinball machine, created new artwork for the back glass and playfield, and converted into a pinball machine for the Netflix series “Stranger Things.”

Maybe there’s a lesson here that applies to every technology: that it can keep on surviving — as long as there are people who want it too.

Or, as Spiteri puts it, “As long as the love is still there — this will keep going.”

SHARE THIS STORY
RELATED STORIES
How to Get Started Filling 3.4 Million Cybersecurity Jobs Donald Knuth's 2022 'Christmas Tree' Lecture Is about Trees 5 Ways ChatGPT Could Supercharge Chatbots 2022 in Review: AI, IT Armies, and Poems about Food Platform Engineering Won’t Kill the DevOps Star
SHARE THIS STORY
RELATED STORIES
The Power and Ethical Dilemma of AI Image Generation Models Why 'Explainable AI' Can Benefit Business Java's James Gosling on Fame, Freedom, Failure Modes and Fun CES 2023: Robots, Astronauts, Schwarzenegger and Flying Cars Entrepreneurship for Engineers: Avoiding Feature Bloat
THE NEW STACK UPDATE A newsletter digest of the week’s most important stories & analyses.
The New stack does not sell your information or share it with unaffiliated third parties. By continuing, you agree to our Terms of Use and Privacy Policy.