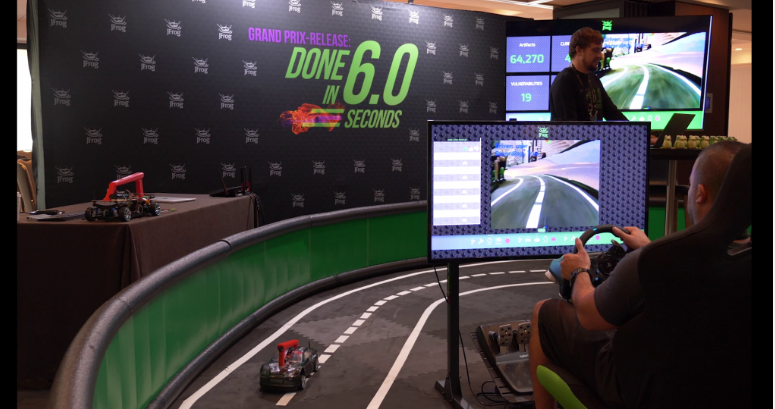 JFrog sponsored this article, which was written independently for The New Stack.

Despite all the development to perfect autonomous cars, many challenges remain. In fact, Gill Pratt, director of the Toyota Research Institute, an article from The New York Times referred to a “trough of disillusionment” in the field.

Enter JFrog, with its idea of liquid software, JFrog’s term for software that gets continuously updated with no impact to the user. At its annual swampUP 2019 user conference last week in San Francisco, it set up a demo of over-the-air updates with remote-control models in which developers could update code on the fly.

“The idea is you should just turn the car on and it should have the software it needs. You shouldn’t have to plan a downtime or schedule [maintenance],” said Kit Merker, vice president of business development, in a keynote session equating software engineers with mechanics.

The idea of driverless cars is creating anxiety all around — including users, other drivers, pedestrians and even developers.

“You don’t want to be the developer who wrote the code, probably on a Friday, that caused a recall,” he said.

The American Automobile Association’s latest survey found that 7 in 10 Americans fear autonomous vehicles and the level of skepticism grew by 8 percentage points from its previous 2017 survey.

Among the news stories feeding into that anxiety: In China, a driver inadvertently triggered an update that stalled traffic for an hour with the driver trapped inside unable to open doors or windows.

In addressing the software update issue, the JFrog team came up with a few basic rules.

What it called Rule 0, but is obviously a given: Don’t kill anyone!

“For most software, life and death aren’t hanging in the balance,” Merker said, noting that it’s essential to build trust between the driver and developer.

Other rules for the project:

The company used its Enterprise+ platform to demonstrate how updates could be implemented even while the car is in motion. It incorporated the Yocto build system for embedded Linux; Conan, its C/C++ package manager;  Automotive Grade Linux, and the IoT tool Lava for automated device management and testing.

It relied on JFrog Distribution to deliver release bundles to Artifactory Edge nodes to separate download from install, then employed open source update manager Mender for side-by-side deployments onto the devices, enabling a quick rollback to the last safe version on any failure.

“It’s at the scale of an RC car, but we’d love to work with all of you to build it out all the way,” Merker said of the demo. “Not just for us. We want to make this entire platform for the automotive industry much, much stronger, and we’d like to do it together.”