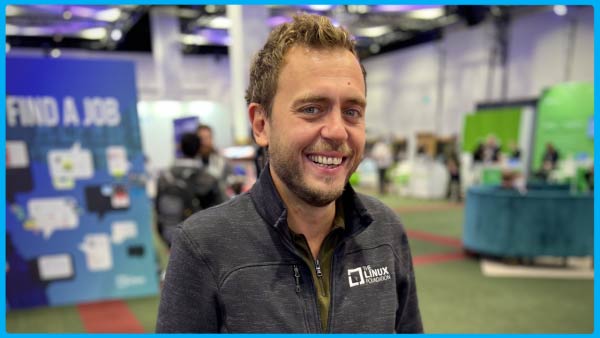 DUBLIN — Europe’s open source contributors, according to The Linux Foundation’s first-ever survey of them released in September, are driven more by idealism than their American counterparts. The data showed that social reasons for contributing to open source projects were more often cited by Europeans than by Americans, who were more likely to say they participate in open source for professional advancement.

A big part of Gabriele (Gab) Columbro’s mission as the general manager of the new Linux Foundation Europe, will be to marry Europe’s “romantic” view of open source to greater commercial opportunities, Columbro told The New Stack’s Makers podcast.

The On the Road episode of Makers, recorded in Dublin at Open Source Summit Europe, was hosted by Heather Joslyn, TNS’s features editor.

Columbro, a native of Italy who also heads FINOS, the Fintech Open Source Foundation, recalled his own roots as an individual contributor to the Apache project and cited what he called “a very grassroots, passion, romantic aspect of open source” in Europe

By contrast, he noted, “there is definitely a much stronger commercial ecosystem in the United States. But the reality is that those two, you know, natures of open source are not alternatives.”

Columbro said he sees advantages in both the idealistic and the practical aspects of open source, along with the notion in the European Union and other countries in the region that the Internet and the software that supports it have value as shared resources.

“I’m really all about marrying sort of these three natures of open source: the individual-slash-romantic nature, the commercial dynamics, and the public sector sort of collective value,” he said.

A ‘Springboard’ for Regional Projects

Europe sits thousands of miles away from the headquarters of the FAANG tech behemoths — Facebook, Apple, Amazon, Netflix and Google. (Columbro, in fact, is still based in Silicon Valley, though he says he plans to return to Europe at some point.)

He added, “I think any developer should consider this as a potential springboard platform for the technology, not just to be visible in Europe, but then hopefully, beyond.”

The European organization’s first major project, the OpenWallet Foundation, will aim to help create a template for developers to build digital wallets. “I find it very aligned with not only the vision of the Linux Foundation that is about not only creating successful open source projects but defining new markets and new commercial ecosystems around these open source projects.”

It’s also, Columbro added, “very much aligned with the sort of vision of Europe of creating a digital commons, based on open source whereby they can achieve a sort of digital independence.”

As geopolitical and economic turmoil roils several nations in Europe, Columbro suggested that open source could see a boom if the region’s companies start cutting costs.

He places his hopes on open source collaboration to help reconcile some differences. “Certainly I do believe that open source has the potential to bring parties together, ” Columbro said.

“That’s when people are forced to look more seriously about ways to actually collaborate while still maintaining throughput and efficiency. And I think open source is the prime way to do so.”

Listen to this On the Road episode of Makers to learn more about Linux Foundation Europe.