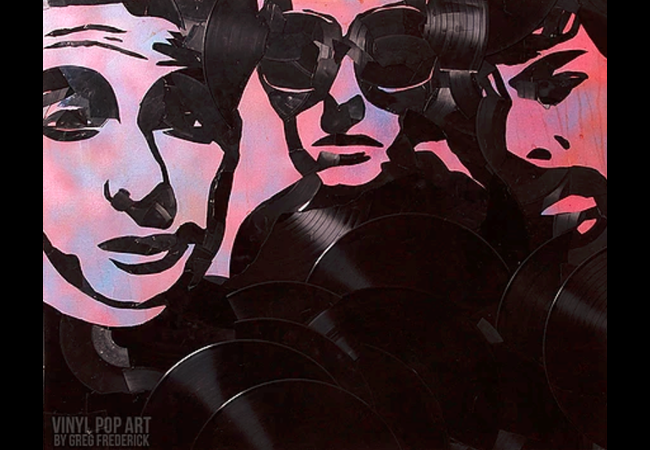 Even though the hearts of consumers were won away by other forms of storage media, the shiny vinyl records that once stored our favorite tunes aren’t ready for the junk heap of history. Artists are still finding creative ways to honor the role of vinyl records in a past generation’s love of music — by using vinyl records to make art!

For Brooklyn artist Greg Frederick, it started when he found an abandoned box of records left on the street. For the six years since he’s been making portraits of icons from the music industry using what gadget site Digital Trends calls “an intricate tapestry of vinyl record pieces.” David Bowie, Bob Marley, Prince, and Amy Winehouse are now preserved forever in vinyl encased in resin.

He’s managed to turn it all into a business called Vinyl Pop Art.

“I’ve been a lover of vinyl since I was 10,” he told Digital Trends in a video interview. “I inherited my grandmother’s turntable, and then in high school, I was working in record stores. I’ve always been around vinyl.”

Maybe it was inevitable he’d develop a certain reverence for this particular music media. 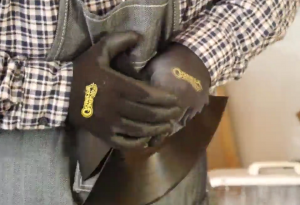 A screenshot from Digital Trends’ video interview with Greg Frederick

“I never buy a new record just to break it,” he told Digital Trends. When he needed more, he started trolling eBay for more vinyl records. And now local record stores offer donations to him from their “dollar bins.” He estimates that he has 3,000 vinyl records now tucked away in his closet.

It took a few experiments to develop his mixed-media style. First, he’d tried adding vinyl to photographs. Then he did the same thing — but without the photographs. He insists on only using “discarded, unplayable” records, according to Digital Trends.

And piece by piece, they become affectionate portraits of Jerry Garcia, Jimi Hendrix, Michael Jackson, and all the other gone-too-soon icons from the world of popular music.

He’s done portraits of living artists too. There’s Mick Jagger, Tom Petty, and even the Beastie Boys and The Village People. Soon they all found a new home in vinyl. And there’s something especially poignant about his portrait of a moment in time with the Rat Pack:

And he’s also recreated the distant, brooding of Elvis Presley, and the forlorn face of Kurt Cobain:

Earlier this month, Frederick also announced “BIG NEWS!” on his Twitter feed. “I’m pulling a Beyonce! I’ve been secretly working hard on a brand new series of art and am showing it.” The secret? He’s now also working with cassette tapes — using them to create plastic “canvases” on which to paste bits of vinyl records. But even the cassettes are lovingly preserved in a layer of transparent resin. (Frederick tells the site that meticulously eliminating the air bubbles for each layer of resin in his artworks requires a full day, so each completed piece takes “a good week.”)

And he estimated it took at least 40 hours to put together his collage of Michael Jackson, using shiny CDs for Michael’s famous glove. He also used a few CDs for an elaborate image of Cyndi Lauper.

Those aren’t the only material he uses. Frederick once made a work of art that incorporated yellowed 98-year-old copies of the Wall Street Journal from 1919. He mounted them to two doors, then used that as a yellow canvas to create a stunning portrait of the statue of liberty — out of bits of black vinyl records.

“You could have the opportunity to turn a loved one or your favorite icon into an original masterpiece,” explained his website.

Frederick’s work has him keeping some interesting company.

His website notes he’s been exhibited next to Andy Warhol at the Leslie Lohman Museum. His vinyl-record-and-cassettes portrait of Jay Z now hangs at the World Trade Gallery by the World Trade Center. In 2015 he made headlines in the New York Daily News — for his claim that Courtney Love used his artwork for tour merchandise — then failed to pay him.

And U.K. artist Keith Haynes is also paying tribute to vinyl records. He told one interviewer it was record sleeve art that inspired him to go to art school and describes his work as “pop art created from pop material.” But he went from creating portraits of recording artists — using their very own records — to creating maps. Specifically, subway maps, where each vinyl record represents a stop. And some of the installations even come with a set of headphones so you can listen to tracks from each record.

It’s touching to see these artists remembering what the musical magic of records had meant to the generations that came before. The Digital Trends video ends with a perfect quip from reporter, Keith Nelson Jr.

“Even when the music stops, the art doesn’t have to.”

SHARE THIS STORY
RELATED STORIES
Watch Out, Attackers Have Their Heads in Your Cloud! 2023 Will Be the Year FinOps Shifts Left Toward Engineering Entrepreneurship for Engineers: Avoiding Feature Bloat Linux Foundation Study Assesses 'Outsized' U.S. Influence on Open Source How Jit Builds a Platform Engineering Mindset in the Cloud
SHARE THIS STORY
RELATED STORIES
Golden Paths Start with a Shift Left Watch Out, Attackers Have Their Heads in Your Cloud! CES 2023: Robots, Astronauts, Schwarzenegger and Flying Cars A Brief DevOps History: The Road to CI/CD It Happened to Me: How I Suddenly Owed AWS $13,000...
THE NEW STACK UPDATE A newsletter digest of the week’s most important stories & analyses.
The New stack does not sell your information or share it with unaffiliated third parties. By continuing, you agree to our Terms of Use and Privacy Policy.