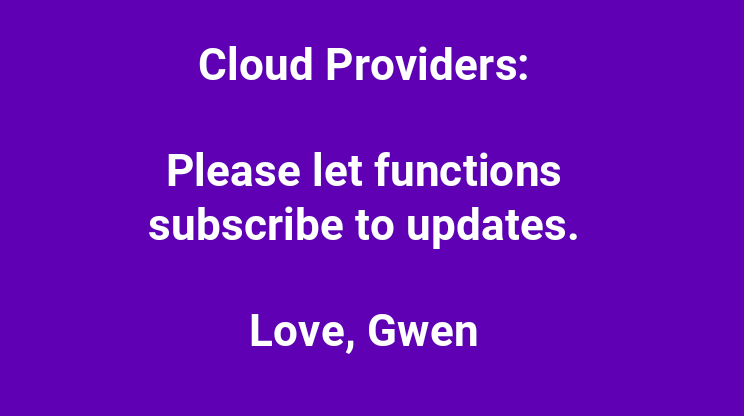 Gwen Shapira, a product manager at Confluent, has been moving data around for over 20 years. Co-author of “Kafka: The Definitive Guide,” Shapira regularly presents on stream processing, Apache Kafka, data integration and event driven architectures. At Serverless Days NYC recently, she shared her thoughts on serverless, seeing great benefits for developers not having to worry about scalability as the serverless cloud provider will manage scaling the architecture, allowing developers to focus on their applications.

But for developers working in serverless, Shapira currently sees the technology as akin to a fixie bike. “Hipsters love these bikes because they are simple, but then you hit a hill and you understand why you need gears,” Shapira says.

For Shapira, managing state is that first hill. State refers to data that is fixed in a point of time. Normally, a serverless workflow is viewed as having pulled in data in one state, to do something, and then, possibly, return the data in a new state at the end of the process.

For example, when media images are taken into a serverless workflow and transformed so the original image is processed into a thumbnail, a standard output size for media use, and in other formats, and those images are then stored back in an S3 bucket, that workflow has not had to manage state as the images started in one form and ended in another. But as serverless begins to get used for multiple business workflows, there is a need to receive data, transform it and then use the transformed data in a subsequent process. That means these more complex serverless processes will be required to manage state. She explained: “Stream processing in serverless, where data may be stateful, makes you ask: do I have the tools and background to deal with this complexity?”

“In serverless, you need the database to be very fast,” said Shapira. “You need the database to scale as well as the functions and keep the same pay-for-use model. But when you look, you find out that there are exactly zero databases with a pay-for-use model. They mostly have a dual payment model: you pay for the storage, and you pay for use. So there are very few that will scale as well as your serverless functions, and low latency is a pretty big bottleneck. Having to go into large databases with multiple tables, get data, then push another update… that becomes a pretty significant overhead.” 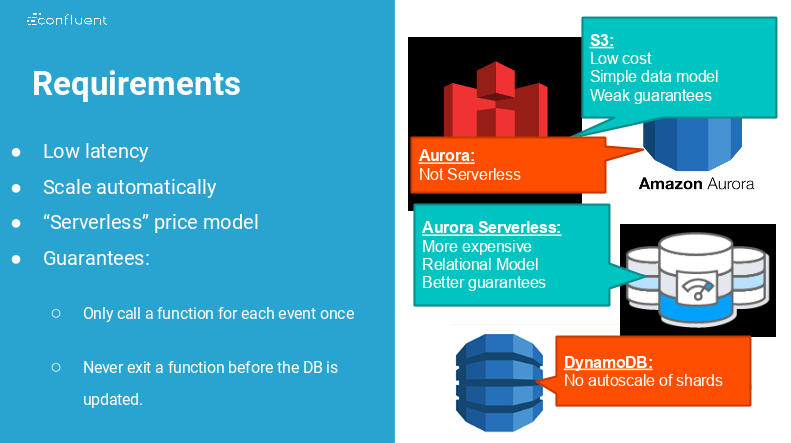 Shapira gives an example of an order request. The order would need to check the warehouse to see if there is enough inventory, then lock that inventory to the order so no one else takes it, update the inventory to show the reduced items, and then move that order to shipping. If there aren’t enough items, the order has to be updated. In that sort of situation, it is not as simple as just relying on events that trigger functions: there is a degree of maintaining the state of the data and updating it in the one workflow. In serverless, just choosing a database that allows state may not be a good enough solution.

Shapira points to three ways to solve this problem:

Shapira encourages developers to step back from their code to consider the real world application of their work. “A function is an action to take. But this event is also information. When an order is taken, for example, the fact that this happened means I may need to update the data store in addition to reacting to it. For example, the inventory just got updated, so I may need to alert a customer that the item is now available and then that may mean I also need to update the inventory warehouse.”

Serverless, like API-enabled architectures, require a closer connection between the business and technical sides of an organization.

“In serverless, you need the database to be very fast.”

Shapira is excited by the possibility that serverless brings to managing these problems, seeing this as a new way to strip away the non-essentials and focus on handling the real business problem. But she also suggests there is a lot of wisdom to draw from what has already been thought through, especially around event-driven design models in microservices architectures and applying them to serverless. “Event-driven microservices are quite similar, so learn those patterns, they are often fully applicable in this slightly new domain,” she suggested.

Don’t Let Collaboration Apps Be a Pain in the SaaS
December 09, 2021

Caching the GraphQL Introspection Query in a CDN
December 09, 2021