Marten Mickos: Why Docker is Analogous to Mopeds in a Big City 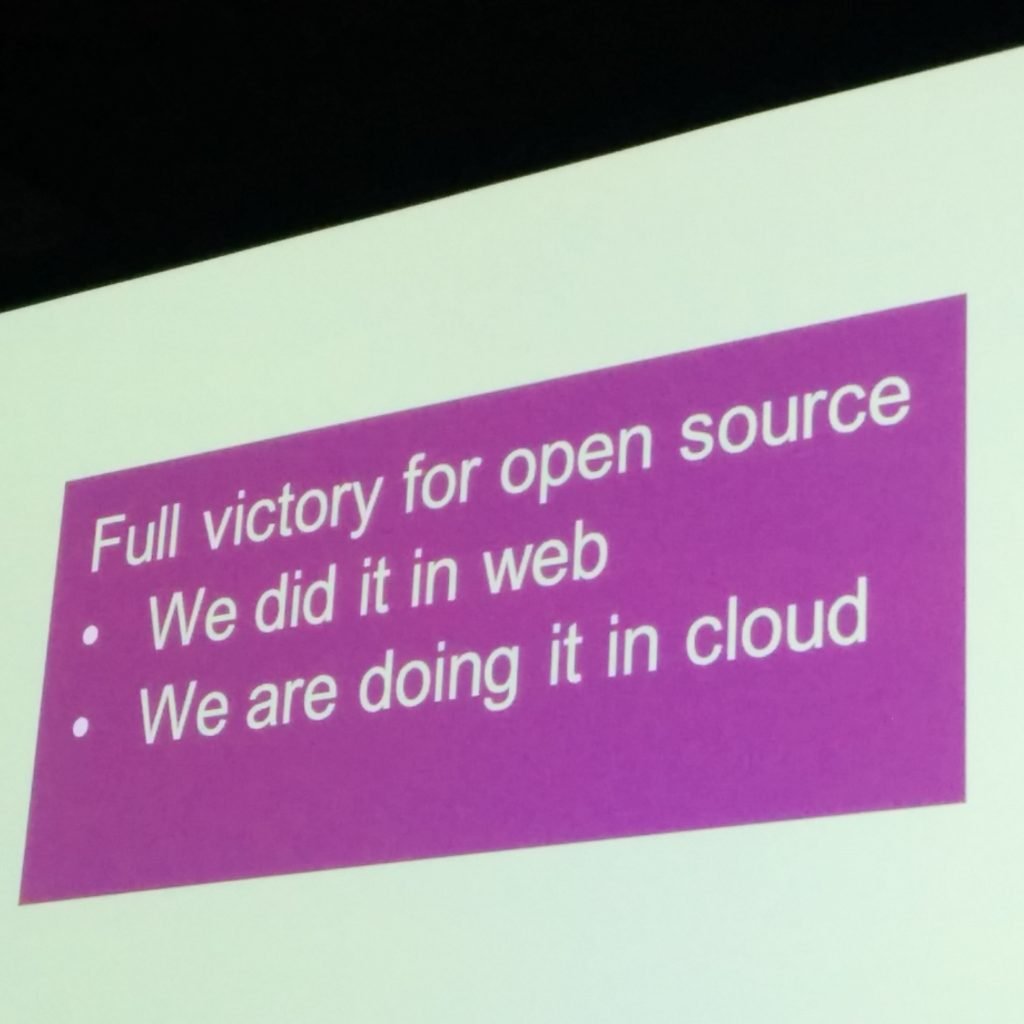 Mårten Mickos is in his fifth week at HP after leading the sale of Eucalyptus Systems to the Silicon Valley giant. He now leads HP’s cloud efforts, reporting to CEO Meg Whitman. Today he gave the keynote at Ricon, the distributed computing conference here in Las Vegas where he gave his own analogy about containers and the Docker ecosystem.

His comments followed a talk that explored the history of open source software and its role in distributed computing.

It was an easy to follow discussion but it did not mention Docker which lead to a question from the audience (31:04 minute mark of the keynote) based on the assumption that:

Containerization is the new hotness. 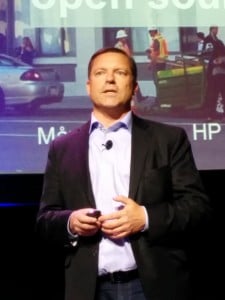 Mickos said that first of all the question is: “Why now?” Simply, it points to the impossibility of predicting what will happen. Furthermore, containers do not solve the problems of the world. You can squeeze a balloon but the air just goes somewhere else.  Technology is the same way. It may seem like you are removing the complexity but really it is just is pushing it somewhere else.

That’s true of containers, which need a platform for running plus networking and other support.

Maybe the big car is a hypervisor and the moped is a Docker container.

I was curious about what Marten said as the seed for PaaS environments are containers. Cloud Foundry uses container technology as does Heroku. Docker actually has its genesis in PaaS.

But I agree with him that the analogy does work. The moped driver may get wet but that is why drivers wear protective clothing. Docker does need better protection but that will come. More so the question is about it relationship with virtual machines and how the two co-exist.

Mickos spent most of his talk discussing the role of developers, open source and HP Helion, the company’s cloud effort.

Some of the highlights:

Developers do not control the world but they certainly are like comets flying in space with weird ideas. They are also a bit obsessed over things like monitoring. But all of their work does trickle down. There’s just a wait to see how it works out. 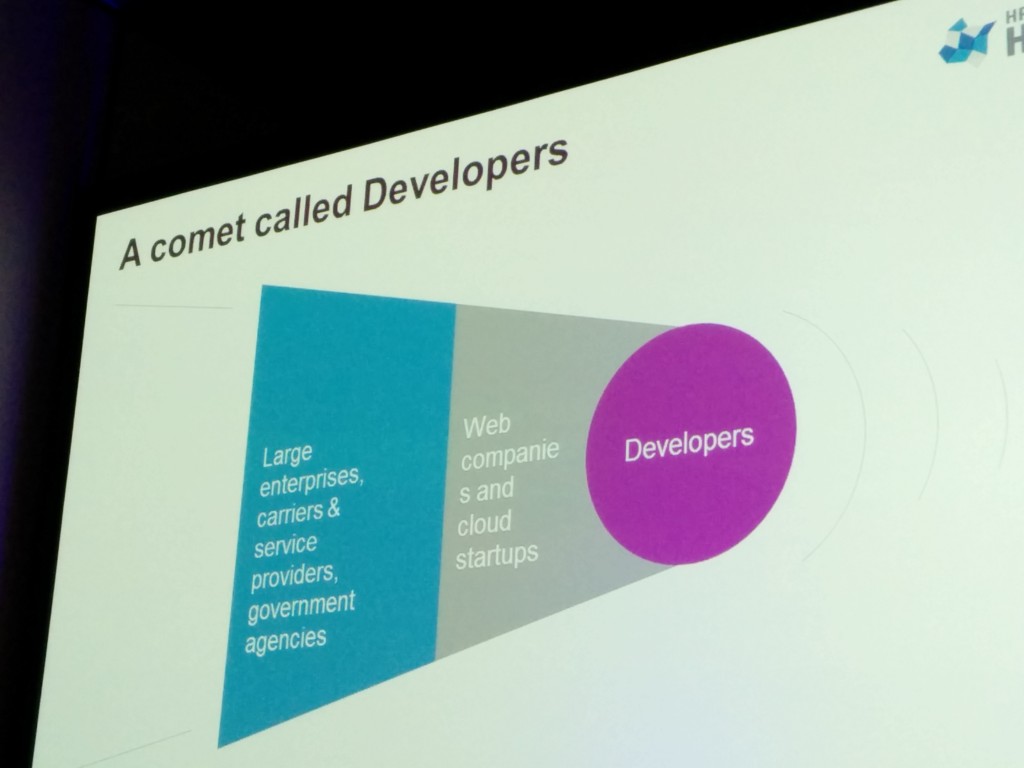 For example, there was MySQL and Oracle in the beginning of the database movement. Today there are graph databases and a variety of others. It’s the developers, though, who test the databases making it easier for the people who are trying to determine what database to use.

But we did not start with distributed systems. It began with developments such as the LAMP Stack which was not distributed at all.

Now we see all forms of open source communities. OpenStack has an open source ecosystem with companies and individual developers both participating.

Cloud Foundry was led by a corporation yet it is an an open source project with lots of contributors.

The use of distributed infrastructure has helped companies turn weaknesses into strengths.

Scalable systems today are not like the stacks of old. Servers are no longer pets with names but instead are treated like cattle.

Monolithic stacks are no longer the norm. We have instead signed on to the Agile model. In a cloud world we have designed for failure.

Open source was not accepted in the world a t one time. But now it is. It has been consumerized.

How will open source win in the cloud? Actually it is happening now.

As  for HP Helion — there is the hybrid market to consider. In that world it means connecting disparate clouds that do not talk to each other by lifting the abstraction to the PaaS layer. You do not care what underlying cloud is.

HP is now the leading contributor in the Juno release of OpenStack.

And…containerization is the new hotness.

Alex Williams is founder and editor in chief of The New Stack. He's a longtime technology journalist who did stints at TechCrunch, SiliconAngle and what is now known as ReadWrite. Alex has been a journalist since the late 1980s, starting...
Read more from Alex Williams
SHARE THIS STORY
RELATED STORIES
Case Study: How SeatGeek Adopted HashiCorp’s Nomad Application Storage Is Complex. Can Automation Simplify It? What Is the Docker .env File and How Do You Use It? .NET 7 Simplifies Route from Code to Cloud for Developers Data, Analytics and AI: What Will Happen in 2023
TNS owner Insight Partners is an investor in: Juno, Docker, Simply.
SHARE THIS STORY
RELATED STORIES
Application Storage Is Complex. Can Automation Simplify It? How to Implement a Security Scanner for Docker Images The Next Evolution of Virtualization Infrastructure Can Observability Platforms Prevail over Legacy APM? Data, Analytics and AI: What Will Happen in 2023
THE NEW STACK UPDATE A newsletter digest of the week’s most important stories & analyses.
The New stack does not sell your information or share it with unaffiliated third parties. By continuing, you agree to our Terms of Use and Privacy Policy.