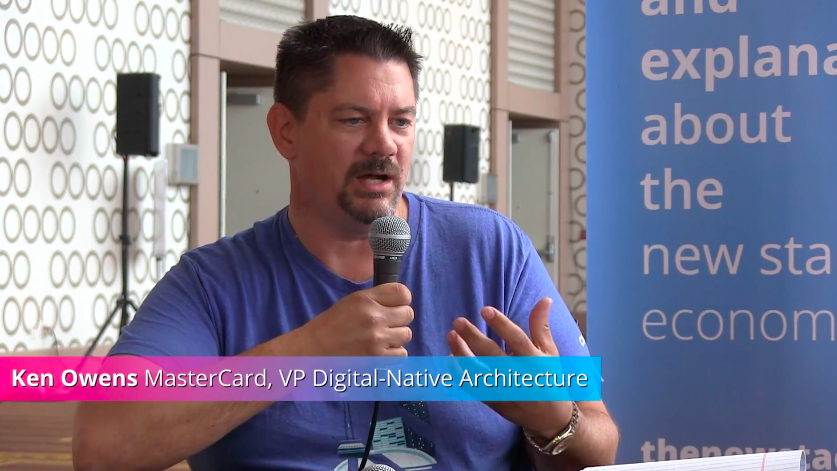 But now, he’s taken on a similar role on the other side of the fence, as Vice President for Digital Native Architecture at financial services provider Mastercard. Now his job is to articulate the requirements for software-defined infrastructure to a new, and perhaps even more skeptical, audience. At the recent Open Source Summit in Los Angeles, he took note of what he considered to be an attendance imbalance between the introductory sessions and the “lessons learned” discussions, with the latter grabbing the lion’s share of people.

It wasn’t because folks already know the technology and don’t need an introduction to it, Owens believes. As he told Scott Fulton for this edition of The New Stack Makers podcast, he has observed a continued hesitancy among enterprises to going all-in on any technology, especially in the open source field — at least not until there’s more history behind it.

“If you look at just the space I’m representing, cloud-native,” said Owens, “there are hundreds of projects and companies doing cloud-native solutions. So the first question you have to ask when you’re in the enterprise is, ‘Okay, which of these do I care about? Which of these do I want to learn more about?’ And when you don’t really have time to go out and learn a whole lot new, you want to start with the subset of what other enterprises are using today. You want to learn from what other enterprises have done.”

Enterprises, he believes, are waiting on one another to take the initial plunge, including into technologies that we at The New Stack may acknowledge are no longer so “New.” And some of those enterprises may have been convinced that there will yet be a 1980s or ‘90s-style “shakeout,” leaving one or two cloud providers and maybe one distributed orchestration methodology in the mix. At that time, there would be no point for further hesitancy, because everyone’s choices will have been made for them.

3:17: Discussing the imbalance in session attendance due to tentativeness and questions surrounding enterprise cloud-native solutions.
5:42: Transforming business models for the enterprise to take advantage of new technologies and cloud-native business models.
8:26: The potential for an intermediate platform that could exist in the layer between the current orchestration platform and where enterprises are today to help them along that transition space.
13:41: The architecture of identity in networking in regards to the Equifax breach.
18:25: Database security and stateful services in a containerized environment.
23:08: How do we start the process of communicating to the security community and commercial software providers?

Scott M. Fulton III leads the developer content team at Neo4j, and before this, was a 37-year veteran producer and editor, including for The New Stack, where he created the Context podcast. He produced the Scale blog for ZDNet, was...
Read more from Scott M. Fulton III
SHARE THIS STORY
RELATED STORIES
Entrepreneurship for Engineers: Painkiller or Vitamin?  Jamstack Panel: Multiple JavaScript Frameworks Are a Good Thing Grafana Shows New Observability Projects at ObservabilityCON How Do We Protect the Software Supply Chain? How Web Tech Got This Way and How It May Evolve in the Future
SHARE THIS STORY
RELATED STORIES
Devs Are Excited by ActivityPub, Open Protocol for Mastodon How Do We Protect the Software Supply Chain? Software Startup Aims at Cluster Computing Barriers Making It Easier to Build Apps with Time Series Data Entrepreneurship for Engineers: Painkiller or Vitamin?
THE NEW STACK UPDATE A newsletter digest of the week’s most important stories & analyses.
The New stack does not sell your information or share it with unaffiliated third parties. By continuing, you agree to our Terms of Use and Privacy Policy.