MayaData, the company behind the OpenEBS container attached storage (CAS) software, has introduced Kubera, a SaaS or on-premises software that adds a number of operational features to further help Kubernetes, along with OpenEBS, to manage the data layer.
Jun 17th, 2020 2:00pm by Mike Melanson 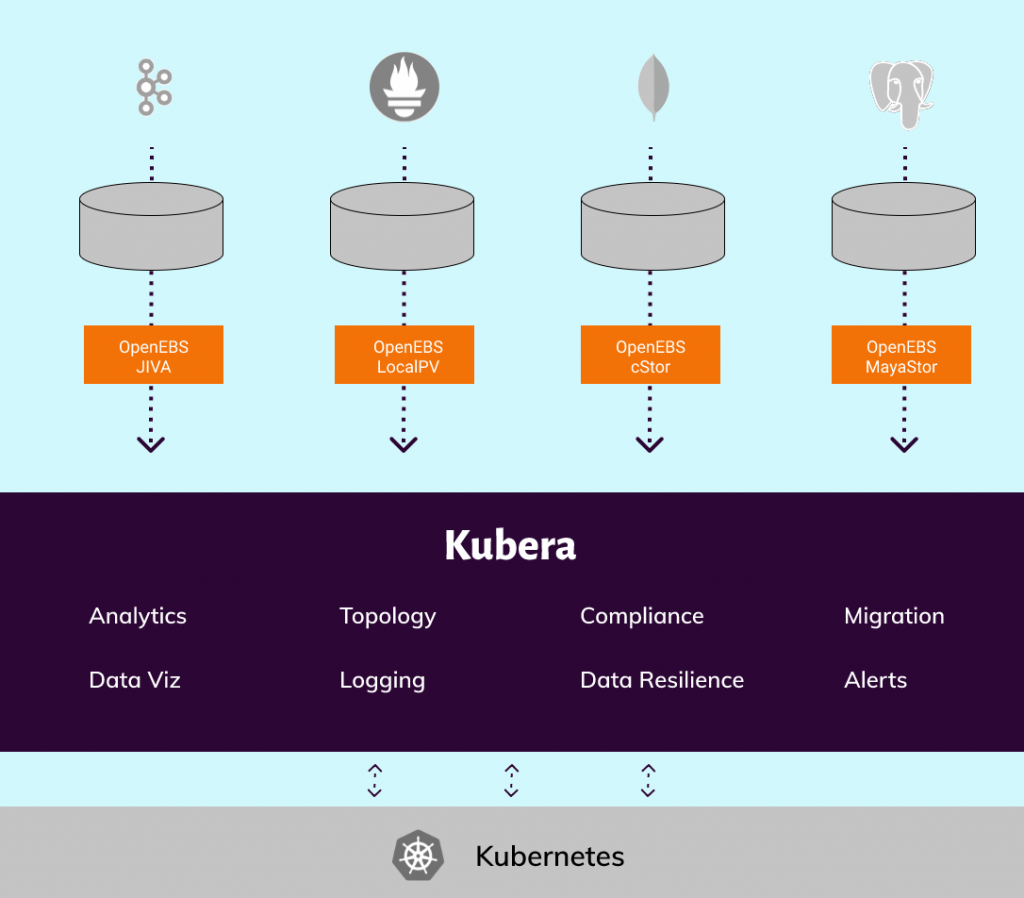 MayaData, the company behind the OpenEBS container attached storage (CAS) software, has introduced Kubera, a SaaS or on-premises software that adds a number of operational features to further help Kubernetes and OpenEBS manage your data layer.

“Kubera’s focused on the operations of Kubernetes as your data layer,” said MayaData CEO Evan Powell in an interview. “But what does that mean? For us, that means things like off cluster logging, backups, disaster recovery, migration.”

With CAS, storage software is completely containerized and orchestrated by Kubernetes, which means that each developer or DevOps team can have their own dedicated storage controller for their application and workload. This differs from more traditional, monolithic storage architectures by offering the ability to deliver different rules and data formats for each developer or team, rather than trying to have each play by the same rules.

“Now you, as a team, as a workload, are loosely coupled. That is sort of the big unlock. They don’t have to worry about some shared dependency. You have your own small storage system. Have at it,” explained Powell. “This disaggregated data, loosely coupled data layer, it just fits. That’s why people are moving to Kubernetes and DevOps. It enables these small teams to be autonomous. If you don’t have a data layer that enables that, you kind of break the pattern.”

Powell further explained this point in a blog post about CAS, writing that “if they only use shared storage their workloads have to contend with every other workload that is using shared storage and must pass through the so-called ‘I/O blender’ whereas by adding OpenEBS, they can have their own block sizes, replication patterns, back up policies and more -> and they don’t have to ask for permission from a central storage authority.”

By expanding on the CAS model, and with OpenEBS at its core, Kubera provides all of the operational tools that Powell says users were asking for, such as off-cluster logging, alerting, visualization, reporting, backups, maintenance, compliance checks, troubleshooting, and lifecycle automation. Powell emphasized off-cluster logging as one feature that stands out for using Kubernetes as a data layer, since even a cluster might fail or be descheduled, taking the logging data with it.

“We always try to mention that Kubera has logging. Logging, who cares, right? No, off cluster logging,” said Powell. “It’s really important because sometimes you want to look at the logs when your cluster blows up. Obviously, if you’re keeping the logs on the cluster, you’re at risk of losing the logs when Kubernetes reschedules your cluster or the nodes that you had your logs on.”

Beyond off-cluster logging, Kubera enables simplified configuration, management and monitoring of workloads, including Kafka, PostgreSQL, and Cassandra, back-ups of stateful workloads, visualizations with controls for snapshotting and data cloning, and compliance checks and alerts. Without Kubera, Powell explained, users are left to install and integrate a variety of different tools to provide features like logging and altering.

“They’re spending their time running the stuff that is supposed to help them run their stuff. When do they actually get to run their stuff, right? And so what we’re trying to do is take some of the operational burdens of these operational tools off their plate and do it for them via Kubera,” said Powell.

Mike is a freelance writer, editor, and all-around techie wordsmith. Mike has written for publications such as ReadWriteWeb, Venturebeat, and ProgrammableWeb. His first computer was a "portable" suitcase Compaq and he remembers 1200 baud quite clearly.
Read more from Mike Melanson
SHARE THIS STORY
RELATED STORIES
5 Security Principles to Guide Your DevSecOps Journey Use of Spring Shifts Toward Modern Apps and Architecture Why Trust and Autonomy Matter for Cloud Optimization 2023 Will Be the Year FinOps Shifts Left Toward Engineering Port: Platform Engineering Needs a Holistic Approach
TNS owner Insight Partners is an investor in: The New Stack.
SHARE THIS STORY
RELATED STORIES
Expedia: 3 Tips for More Effective Unit Testing SRE vs. DevOps vs. Platform Engineering A Platform Team Product Manager Determines DevOps Success CyberArk Decreases Cognitive Load with Platform Engineering 5 Security Principles to Guide Your DevSecOps Journey
THE NEW STACK UPDATE A newsletter digest of the week’s most important stories & analyses.
The New stack does not sell your information or share it with unaffiliated third parties. By continuing, you agree to our Terms of Use and Privacy Policy.