Meet the College Student Who Makes His Own Chips 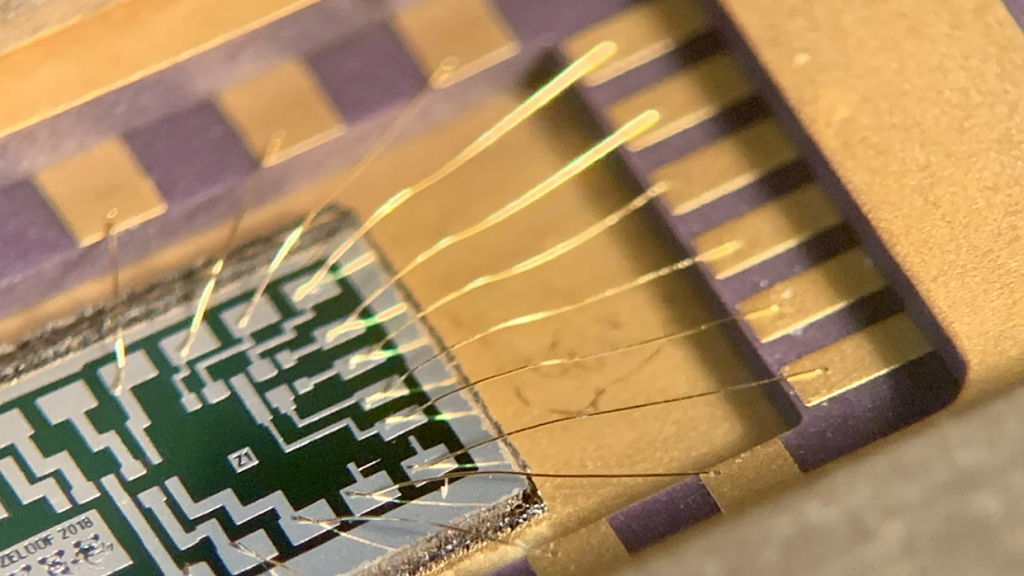 Sam Zeloof, 21, builds homemade semiconductors in his family’s garage in Flemington, N.J. (In his latest video, Zeloof refers to it casually as his “garage fab.”) The Carnegie Mellon University student has been doing it since high school, becoming a truly inspiring example of just how far a do-it-yourself spirit can take you.

And best of all, he’s documented it all in detailed blog posts and nearly 50 videos uploaded to YouTube, sharing what he’s learned for others who might follow in his footsteps.

“I hope that my success will inspire others,” Zeloof writes in an early blog post, “and help start a revolution in home chip fabrication. Let’s democratize the tools of innovation.”

But how does one become an amateur chip builder? It all began as an attempt to understand how transistors and semiconductors work.

“I designed the first one during gym class in high school,” Zeloof recalled later on Twitter. “The teacher was out, so there was a substitute, and we had to write an essay or something.”

“[I]n the end,” Zeloof wrote later, “I learned more than I ever thought I would about physics, chemistry, optics, electronics and so many other fields. … My efforts have only been matched with the most positive feedback and support from the world; I owe a sincere thanks to everyone who has helped me, given me advice and inspired me on this project.”

One person he credits for inspiration is the YouTube channel of self-taught chipmaker Jeri Ellsworth.

And Zeloof has already attracted 96 patrons to support his work via Patreon. His page proclaims, “I built a semiconductor foundry in my garage and am making integrated circuits!

“This stuff is super expensive so I need more money thank you.”

Each shard of silicon represents ~1 experiment, typically 0.5-10 hours of work. Many reside as dust on the garage floor. it took industry years to work out the details of making chips and even with the answer key and years of knowledge in books it is still not trivial! pic.twitter.com/nTWWTCKMep

“Acquiring all the equipment and building and fixing all the stuff I take off eBay is half of the whole journey,” Zeloof told IEEE Spectrum. At the time, the magazine reported Zeloof’s setup included an electron microscope he’d salvaged from a university, plus a vacuum chamber built from surplus parts and a high-temperature furnace.

In more recent videos, Zeloof explained that the furnace rises to a temperature at about 1,200 degrees Celsius, and “I also had to deal with a number of hazardous chemicals, like hydrofluoric acid, phosphoric acid, sulfuric acid, hydrochloric acid and a number of others.” But he’s simplified the overall process by purchasing 25 silicon wafers with a layer of polysilicon already applied by the factory.

And where does one buy polysilicon-deposited wafers? Ebay.com. But this raw material still requires some hand-crafted modification.

“They’re way too big,” Zeloof said in his latest video, “so I dice them up using a diamond scribe, into smaller bits,” roughly half-inch squares. Then he puts each wafer into a homemade device that spins them at 40,000 revolutions per minute, allowing Zeloof to leave a nice even and uniform layer of the light-sensitive material, which is then baked into a solid film by placing the wafer on a hot plate.

But more importantly, he’s also built a digital video projector that’s been modified to beam images from his laptop through a special focusing lens that can ultimately project a tiny version onto a wafer. (In one video Zeloof told viewers it can draw lines “a few thousand atoms wide.”) Each projected image shows a part of a mask that will ultimately shape regions of the chip. One by one, the parts are projected, at a much smaller size, onto a light-sensitive material, which ultimately makes it possible to etch that pattern into the wafer. By using a solution of potassium peroxide as a “developer,” the parts of the wafer exposed to the ultraviolet-light pattern are etched away, leaving behind the rest.

The entire project revolves around having a maskless lithography process which allows me to quickly make changes to designs without cost, but somehow I’ve never changed the date stamp on the chips so they all say 2018 even when manufactured in 2019, 2020… pic.twitter.com/RoTnrFvH17

The pattern can be transferred to the underlying polysilicon layer through an etching process involving nitric acid, creating little “wells” into which the conductive material can be applied. That material gets applied when Zeloof returns the wafer to his homemade spinner, which evenly applies the next fine layer: a phosphorous solution suspended in liquid silicon dioxide that will act as the conductive area, or dopant. When the wafer is heated in his high-temperature furnace — over 1,000 degrees C for about 45 minutes — the molecules of phosphorous end up in the etched-in wells.

And then the whole process is repeated two more times to add additional layers onto the wafer.

The wafer still needs to carry an electrical current, so another video shows Zeloof creating wiring for the chip’s tiny aluminum pads using spools of gold wire he’d bought on eBay, applying it manually with a bonding machine. He’d also tried buying the necessary bonding machine on eBay, but it turned out to be missing crucial parts. In the end, he had to rely on one that a fan donated to his project.

It’s a process he mastered using what he calls “strategic trial and error … It turns out that metal adhesion is really difficult to get right.”

But it’s painstaking work. Even just positioning the 25-micron gold wire into the machine takes “about 30 minutes or an hour to thread it through all the various clamps and things,” according to Zeloof’s narration.

The art The artist pic.twitter.com/q8AHy5OXcC

The last step is to put the wafer into that vacuum chamber made from surplus parts to add a layer of metal, which will also go through the same photolithography process as the other layers, followed by a cleansing bath in warm phosphoric acid.

And finally, the chip is done.

Zeloof’s handiwork creates functioning chips. Last summer he used them for fun projects like a guitar distortion pedal and a homemade printed circuit board.

Distortion pedal with all homemade semiconductors, only one external component (cap for AC coupling) pic.twitter.com/M7t3Gl1m5P

He even raised hundreds of dollars last December by selling off some chips from his first batch on eBay.

His first chip, built back in 2018, had just six transistors, but he’s now created an even more complex chip, sharing a new blog post with all the glorious details: 100-transistor, memory-like array on a 10-micron polysilicon gate process. He described it as “the same technology as Intel’s first processor,” even sharing a photo of a cross-section taken with his scanning electron microscope.

I made a lot of improvements to the DIY fab process, this chip has a 10µm polysilicon gate which is the same technology as Intel’s first CPU! Device characteristics are very good [Vth=1.1V, leakage=59nA]. Lots of details on the blog pic.twitter.com/GvwefJ7Ht5

“My chip is a simple 10×10 array of transistors to test, characterize and tweak the process, but this is a huge step closer to more advanced DIY computer chips,” Zeloof wrote in his blog — and he’s especially proud of putting 12 of these into a larger array. “The Intel 4004 has 2,200 transistors, and I’ve now made 1,200 on the same piece of silicon.

“Now we know that it’s possible to make really good transistors with impure chemicals, no cleanroom and homemade equipment.”

And judging by his last blog post, he’s not done yet. “Now that I’m able to consistently make good quality transistors, I should be able to design more complex digital and analog circuits.”

And along the way, he’s still hoping he’ll inspire others to follow in his path, quietly sparking a revolution in the fabrication of chips at home.

Software Testing – The Map Is Not the Territory
December 20, 2021