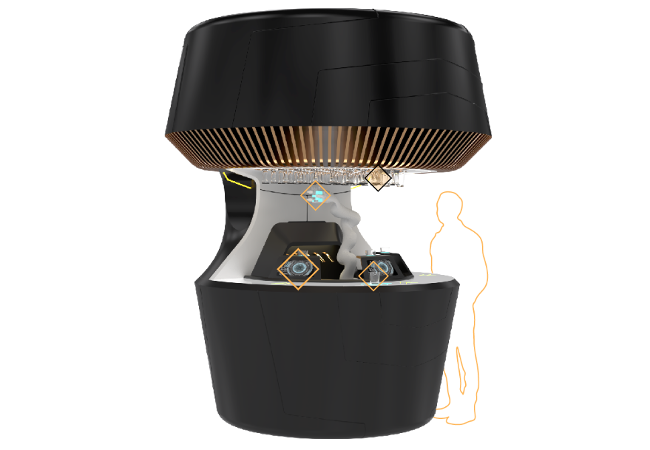 As our technology advances, it’s bringing improvements to an array of everyday activities. But what happens when a cloud-based AI takes over the bar at your local airport?

That’s the vision of Robolab, an Estonia-based robotics startup which just raised over $1 million for Yanu, which their website describes as a “fully autonomous AI and robot empowered bartending unit.”

“So, may Yanu take your order?” asks its website, emphasizing Yanu’s resemblance to an actual living human. “Make no mistake, Yanu has a personality, a soul even. Its spirit can be sensed when taking your order. You converse with something that is almost supernatural, yet very real.”

In one demo video, the robot greets an airport traveler named John by saying “I see you’re having a tough day. Would you care for a refreshment?”

The website points out that it can make between 100 and 150 drinks an hour — or one drink every 24 to 36 seconds, ultimately selling more overpriced liquor than any human bartender could ever hope to. “Forget labor taxation, theft, sick days…” And it reminds its potential business partners that Yanu is “maintainable,” calling it “a cloud-based robot that is easy to operate: monitor, clean, refill.”

The company is also touting its machine-like superpowers — for example, how “Customer identification algorithms can perform quick and accurate age verification.” But of course, facial recognition also makes it easier for Yanu to target new customers, according to a hypothetical scenario in their promotional video. “Since this robot bartender is powered by AI and facial recognition, it sees that John hasn’t ever made a purchase before.”

“Not to worry. The first one is on the house,” says Yanu, sounding like every other human bartender — at least until he adds “Please download our app and get an additional discount for the drink at your next airport.”
And while Yanu’s website promises “interaction,” it also touts both Yanu’s A.I. chatbot and its “advertising possibilities.”

“John downloads the app,” their promotional video concludes, “and is pleased to find that the bartender also accepts cryptocurrencies.” And unlike a human bartender, the whole system can be compressed into a one-ton, 20-foot tall storage container for shipping.

Robolab CEO Alan Adojaan described Yanu to us as “maintainable and relocatable — not to mention stunning to look at.”

But some humans seemed less impressed. “Robot Bartender Makes 100 Drinks per Hour, Awkward Banter,” reports the headline at Wine Spectator, promising readers that “it’ll serve you that glass of bubbly with a smile little to no outward expression, just like Eastern European human bartenders!”

But to its makers, Yanu is serious business. Robolab already has formed partnerships with five airports in Europe and two different beverage companies. While global air traffic continues to grow, an online white paper points out that “many airports generate a much higher proportion of their income from concession activities than from aeronautical operations” — so they obviously have an interest in optimizing revenue.

But of course, like Flippy, the burger-flipping robot, part of the pitch is the spectacle of a human activity being performed by a robot. “A robot hand mixes drinks and serves them,” Adojaan recently explained to Digital Trends. “That’s what differs it from a vending machine. There is a show going on, and real-life action. You gotta see it!”

Adojaan told one in-flight magazine that the robo-bartender will be ready in the middle of 2019, and will cost around $150,000 a year “which is roughly the yearly salary (with taxes) of a good bartender in London,” even though Yanu can do the work of four bartenders. These assertions provoked some pushback from actual bartenders, leading Adojaan to clarify on Medium that he meant Yanu’s cost equaled the salary of two bartenders.

RoboLab already has a functioning minimal viable product, according to an October blog post by Adojaan.

Our team meeting in Tartu University making sure that Mr. Yanu is going to be in the best behaviors in January when our first prototype is born 🤖 #yanu #robotbar #robotics #makerobotsgreatagain pic.twitter.com/RAXmzIK4ds

Earlier this year Robolab raised $650,000 in seed funding from a private Estonian fund, then raised over $1 million more in its first week of ICO pre-sale, “mostly during the private sale,” according to an October blog post by Adojaan. Pre-sale and public sale continues through December 12, and combined with further venture capital, the company hopes to raise over $10 million.

A roadmap in the white paper promises that after their public token sale, the company will establish (and “optimize”) the technical infrastructure for producing the Yanu units, with the first robot bartenders installed in airports in the third quarter of 2019. And by 2020, the roadmap calls for Yanu to have a “flagship venue” in a major city.

But if you dig a little deeper, you realize that their ambitions extend far beyond just robot bartenders. “With the creation of the YANU token, we aim to accelerate the use and development of the entire service robot sector,” the white paper explains promising a network that others can join in, offering benefits like a “shared customer verification database.”

In fact, the white paper sometimes reads like the first chapter of a science fiction novel — especially when it talks about setting up “a network of fully autonomous, AI-controlled units… offering intelligent companionship for customers.” Adojaan tells Digital Trends “It’s a boy’s dream of building a superior machine that will serve and play along. It’s a bit crazy, but why not try?”

Open Interview with one of Yanu’s designer Jan Graps. on YouTube.

But it’s been fun to watch humankind react. “Look out, bartenders: This cocktail-making robot is coming for your job,” warns a headline at Digital Trends, in an article that argues “alcohol and cutting-edge robotics just don’t sound like a good mix… In place of a waistcoat and reassuringly weather-worn features, it takes the form of a snake-like flexible robot arm that’s capable of gripping glasses, pouring bottles, taking payments and doing … well, whatever else a bartender needs to do to turn your drinks order into a soothing, refreshing beverage in your hand.”

Adojaan seems untroubled. “There will always be nice bars, with friendly bartenders, who take time to talk to people,” he told Digital Trends.

“We are aiming at the crammed nightclubs, where the bartender is a robot by default.”