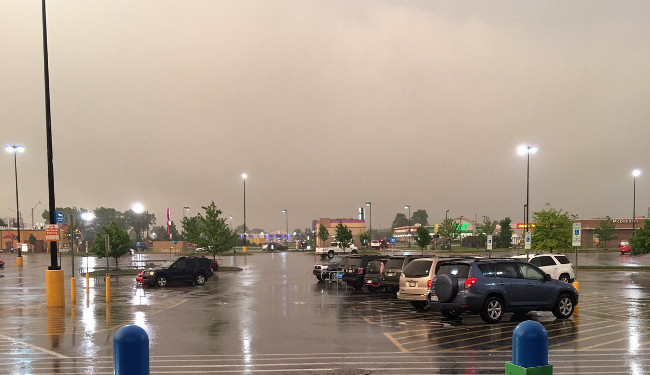 Winter can bring some very bad rain storms — but this year, at least one U.S. state, New York, will have a new way to see them coming.

The state is testing out a system, Mesonet, will be able to fill in the gaps that are missing in the country’s chief weather-tracking system, according to a recent article in The Verge.

The begins with a harrowing story about Prattsville, New York, on a fateful August day in 2011 when Hurricane Irene struck. “We knew that it was raining,” remembered the overseer of a weather-monitoring program at the National Weather Service. “But we did not know how much it was raining, or exactly where rain was falling.”

For weeks the National Hurricane Center had been tracking Hurricane Irene with sophisticated radars and satellites, the Verge reports, and “While it remained hundreds of miles away from the Eastern seaboard, they could predict its movements with fairly good accuracy. But once Irene arrived, meteorologists were unable to judge how conditions differed from minute to minute, or from county to county.”

Humble Prattsville — population 700 — nestled in “leaf-peeping country,” 150 miles north of New York City, was caught by surprise by both massive rains and massive flooding, but the state’s emergency responders “seemed to be just as hobbled as they were in town.” One woman was told “that boats were coming, then that a helicopter was en route, and then that the helicopter wasn’t coming, after all. Later, she learned that the first boat she’d heard about had capsized…”

Ultimately hurricane Irene (and the tropical storm Lee, which hit 10 days later) caused $1 billion in damage, according to the Verge. “Only the terrorist attacks of September 11th, 2001 rival the storms for recovery costs.”

If, as predicted, global warming does end up bringing extreme weather — making better forecasts will become even more important. ClimateWire noted that in “the past year alone, catastrophic rain events characterized as once-in-500-year or even once-in-1,000-year events have flooded West Virginia, Texas, Oklahoma, South Carolina and now Louisiana…”

But fortunately, scientists had already begun thinking about the problem. Two years earlier a 2009 paper published by the National Academy of Sciences had been recommending a “nationwide network of networks.” The paper pointed out that there are lots of people monitoring the weather, but “because there is no national network tying many of these systems together, data collection methods are inconsistent and public accessibility is limited.”

The Verge summarizes one of its most interesting observations: that “While the radar, satellites, and supercomputers used by National Weather Service meteorologists excelled at big-picture projections, they could provide only limited, low-resolution information about conditions on the ground in specific locations… data on things like rainfall, wind, and humidity was being collected from state to state in a chaotic, non-standardized fashion, using a hodgepodge of poorly coordinated networks.” In short, the U.S. fell short when it came to tracking “mesoscale” weather — weather systems on a smaller city or state level.

“The results of your calculations are only as good as the observations you feed into them,” one of the paper’s authors tells the Verge. Apparently what we needed was a kind of Internet of Things that Watch Weather. And New York is now putting the paper’s recommendations into action, setting up their own widespread network of atmosphere-monitoring stations all across the state to fill in gaps in coverage, and complement the “big picture” from satellites. 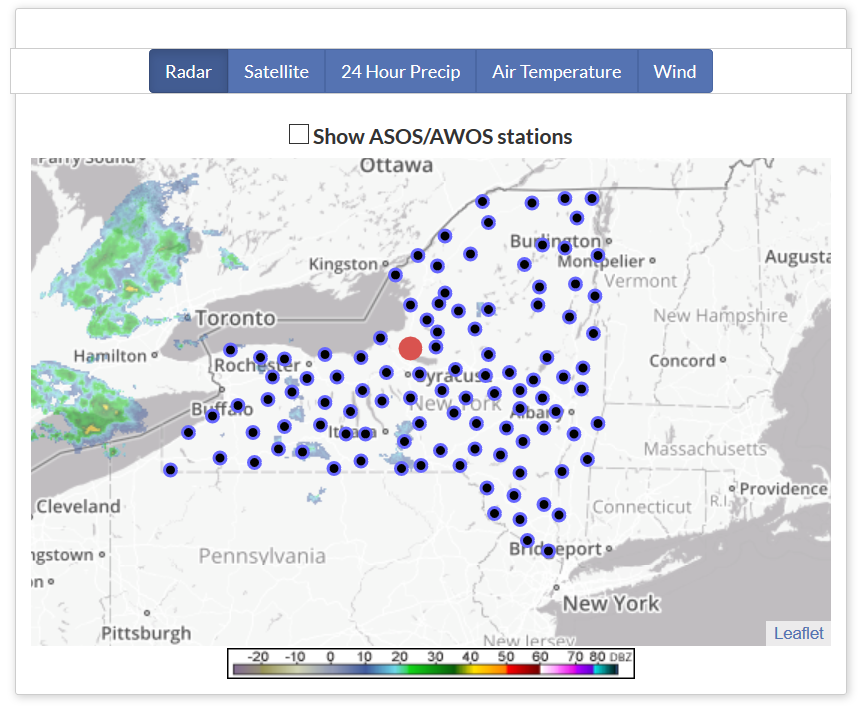 The system is modeled on an earlier implementation of Mesonet, by Oklahoma. In fact, Oklahoma had been one of the more significant pioneers in American weather-watching, ever since the early 1980s when the state’s Ken Crawford, the state’s chief meteorologist had “felt vexed, especially, by a number of recent severe floods, about which, due to a lack of data, almost nothing meaningful could be said.”

Even back then, Japan already had an automated system of weather observation stations, and “Crawford felt embarrassed. His state relied on stations consisting of little more than ‘a stick stuck into a rain gauge’… Readings were taken manually, often by elderly volunteers who made frequent typographical errors.”

It was 1994 when Crawford had set up a Mesonet system, and it the benefits were obvious. During 1999 tornado, the data led to the evacuation of a shopping mall just minutes before it was demolished. Crawford is still considered “the father of the Mesonet.”

With a $30 million FEMA grant, the state of New York is now planning to link 126 observation towers — all within 30 miles of each other. For comparison, in 2011, there were just 27 observation stations, and “Most were at airports, and did not accurately represent the state’s varied weather or topography,” according to the Verge — and they only transmitted data once an hour.

In comparison, “the new network will make data transmissions every five minutes to a wide range of meteorologists, emergency managers, and private-sector partners. When it’s complete, New York’s statewide weather network will be the most advanced in the country — uniquely well-suited to respond to the sorts of extreme events associated with climate change. Currently, under construction, it is scheduled to be fully operational by the end of the year,” The Verge reported.

The article includes an interesting description of the state’s Office of Emergency Management (housed in “a Cold War-era bunker a la Dr. Strangelove, constructed to function as a temporary state government base of operations in the event of nuclear attack.” ) And the reporter also visits the “Mesonet command center” in an underground facility in Albany, on the campus of New York’s state university. The 49 live feeds from the state’s Mesonet towers are simultaneously fed into a single 7 x 7 grid. In addition, there are six more towers, and all the data they collect ultimately gets transmitted to the National Weather service, as well as New York’s Office of Emergency Management.

The Verge reporter paid a visit on one of the Mesonet’s 30-foot towers — sitting on property owned by the highway department — which was one of 17 equipped with a special “vertical profiling technology” capturing temperature, humidity, and wind activity data for a full six miles into the sky.

“Up until now, New York has relied on just three sites for atmospheric profiles,” the article explained — “Launches in Long Island, Buffalo, and Albany send up high-altitude weather balloons twice daily.” That’d be enough if you only wanted to know whether tomorrow’s going to be sunny, but “if you want to know over the next 12–24 hours if a hurricane or a squall line is going to impact a locality or region, you need to have to have this finer-resolution observational data.”

Even just these 17 towers can have an impact — because they’re continuously measuring — and then reporting back their data. “When you’re taking a profile every five minutes, that will give you a very accurate picture of the whole state…” pointed out the author of the 2009 paper. “When you know how the weather has been evolving in the last hour, you can project what’s going to happen in the next hour.”

“It’s like looking out the window every five minutes at 125 places around the state.”

The towers also collect basic data like wind speed, rainfall, and atmospheric pressure — and more uncommon data like the temperature and moisture levels of the ground.

Of course, other states will also benefit from the additional data collected about the weather that’s headed their way. And they’re also not the only ones watching the weather. In 2013 the New York Times ran an article about weather hobbyists with “personal weather stations…technologically more sophisticated yet increasingly easy to set up and use.”

Costing between $150 and $2,500, they come with everything from barometers and thermometers, wind gauges and humidity sensors, and the amateurs can contribute their data to the National Oceanic and Atmospheric Administration’s Citizen Weather Observer Program, or be part of the 200,000+ contributors to the Personal Weather Station Network, hosted by WeatherUnderground.

More sensitive equipment is also available — but watch out for false positives. “While there are clever rain-gathering and wind-measuring devices that rely on disruption of sound waves to arrive at totals, traditional spinning wind cups, weather vanes and rain gauges tend to be less prone to false disturbances, like a really loud cricket.”

But ironically, just as New York’s own statewide Mesonet is set to go into operation, its effectiveness is being questioned — at least for certain kinds of predictions. “A 2010 study co-authored by Stanley Benjamin of the National Oceanic and Atmospheric Administration, concluded Mesonet observations ‘add little or no impact to 3 or 6-hour lower tropospheric wind forecasts,'” according to a local news station. And they also pointed out that another analysis (also co-authored by Benjamin) found that when it came to temperature forecasts, Mesonet data “added very little.”

Nonetheless, Mesonets are good for real-time reporting — and for gathering data on a smaller scale. “There could be effects on very short-range 30-minute forecasts,” Benjamin conceded

The Verge’s article ends with a bold prediction: that “by the end of 2016, the informational gaps that plagued emergency response in 2011 will have been substantially closed…. Mesonet towers will equip the Office of Emergency Management with a continually updated view of meteorological goings-on statewide, so that if conditions worsen suddenly, emergency managers will know exactly when and where.”