Will the browser wars re-ignite, as Microsoft Edge challenges Google Chrome on security and privacy? Office and cloud software will decide.
Mar 15th, 2021 5:00am by Richard MacManus 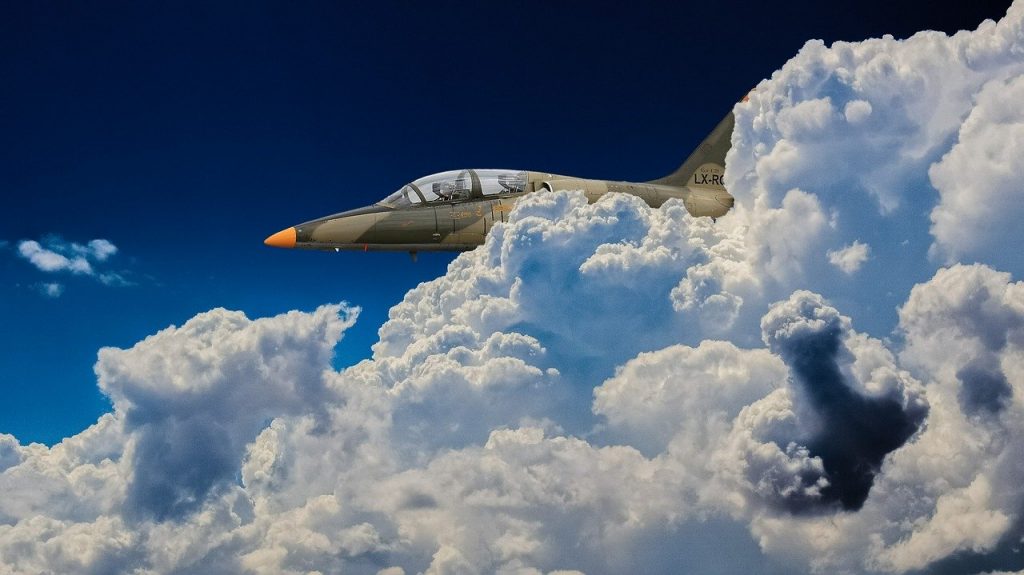 Just over a year ago, Microsoft debuted a new web browser that was designed to replace its long-running — and often controversial — Internet Explorer product. Called Microsoft Edge, the new browser is notable for being based on Google’s open source browser engine Chromium. But despite abandoning most of its proprietary browser software, Microsoft is still very much in the business of competing in the browser market. Earlier this month in its annual developer event, Ignite, Microsoft touted the security features of Edge — and specifically called out Google Chrome in the process. Also, Microsoft released new Edge features such as vertical tabs.

Does this mean the browser wars will flare up again over the next several years? Perhaps, but if so it won’t be a battle to control the underlying technology (as it was in the browser war of the 1990s, between Netscape and Microsoft). This time it will be about the user experience — and in Microsoft’s case, the users it is targeting with Edge are primarily enterprise ones. As I’ll explain in this column, the user experience for business people is impacted by which cloud and office software their employers subscribe to.

But if there is to be a new browser war, it’ll be akin to a pair of siblings fighting. Chrome and Edge have the same DNA — they both use the Blink rendering engine and the V8 JavaScript engine, and the user interface is similar too (with some exceptions, such as the new vertical tabs in Edge). In general, there is parity on the rendering technologies — thanks, of course, to Google having open sourced Chromium back in 2008.

With that said, there are two key areas where competitive jousting between the two browser vendors is starting to ramp up: security and privacy.

“Edge is more secure than Google Chrome for your business on Windows 10,” Williams said, with a slide that linked to documentation about Edge security. That article begins by noting that because Edge was built with Chromium, it “shares the same well-engineered and well-tested security architecture and design” as Google Chrome. However, the article goes on to state, the “Microsoft Edge security story doesn’t stop there.” As well as protecting against phishing and malware, Edge “natively supports hardware isolation on Windows 10.” Mention is also made of native support for Microsoft 365 security and Azure AD Conditional Access. 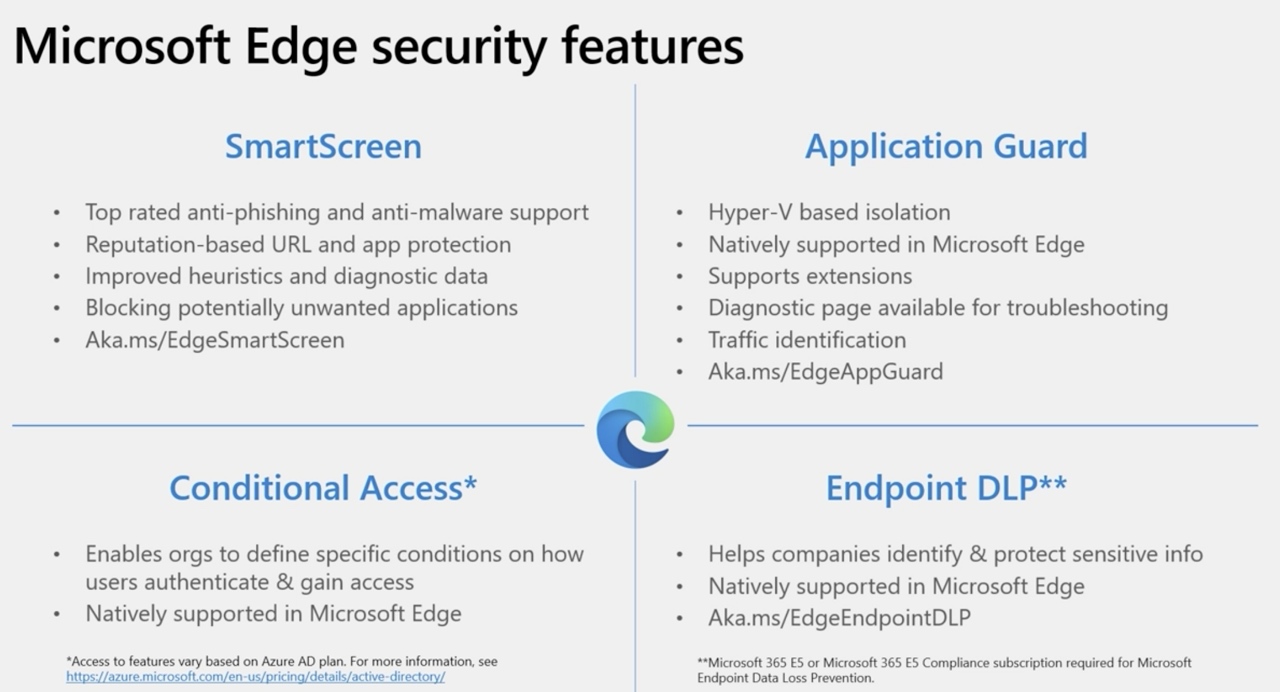 The reason why Edge is able to “natively support” all of these Microsoft office and cloud security features is because they are all integrated with Windows. It’s a story as old as Internet Explorer itself — only now the focus is less on how the browser is bound to the operating system and more on its connections to Microsoft 365 (Microsoft’s set of office software services) and Azure (its cloud platform). The OS integration is just part of the story now since we live in a software-as-a-service world.

So Edge is more secure for its business users, Microsoft is arguing, not because of Windows per se — but rather, because it’s able to run Microsoft 365 applications better and more safely.

Williams showed further integration with Microsoft 365 later in her Ignite presentation, with a feature called Microsoft Search — which is “built-in to Microsoft Edge and available with your Microsoft 365 subscription.” We can probably expect many more office services to be “built-in” to Edge over the coming years. 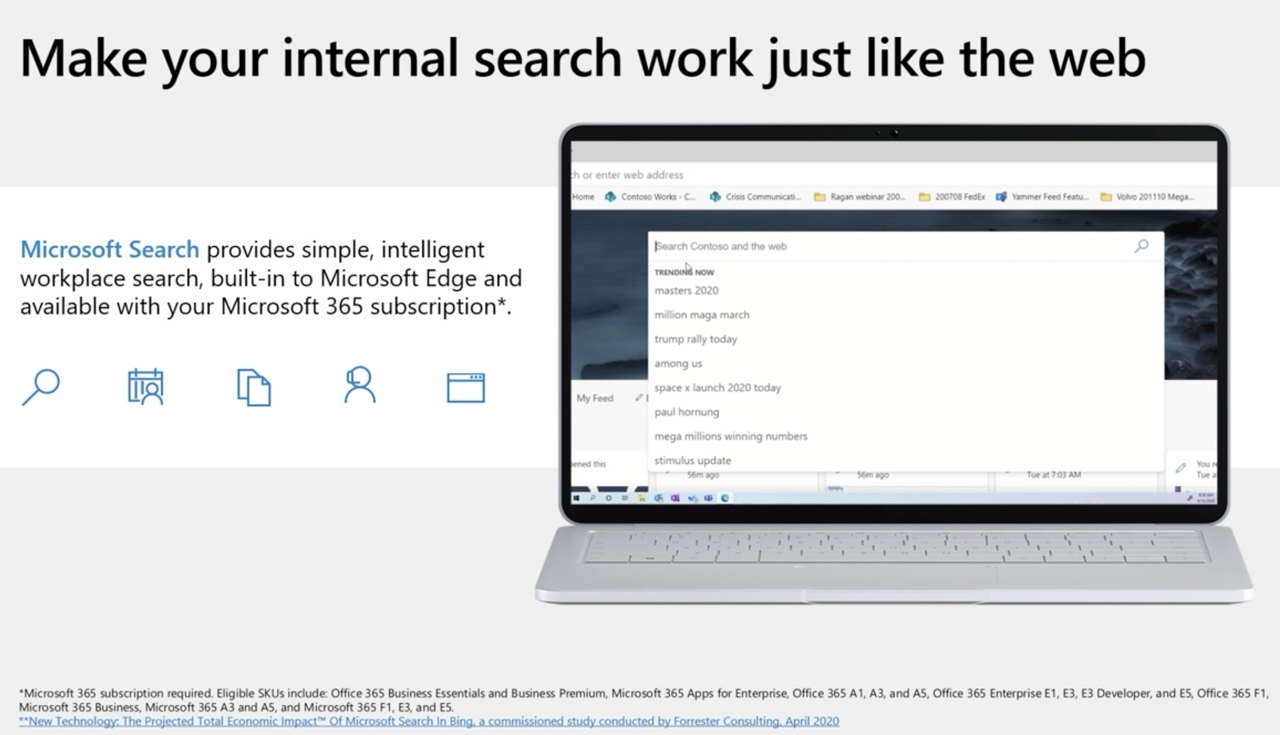 It’s worth noting here that for developers, Edge can have similar integration benefits when testing web applications on Windows. As one Edge user told me via Twitter:

“I use PWAs [Progressive Web Apps] whenever possible, and when I install a PWA I always use the native web engine. So on Windows, I use Edge. It’s fastest, but more importantly it shows up in OS dialogs like “remove applications” and battery/data usage reports.”

Note the OS integration. Although, while it makes for an excellent user experience for that developer, they are no doubt testing their app on all the other main browsers too.

When Microsoft Edge 88 was released this January, Microsoft highlighted its “built-in strong password generator” and a new feature called Password Monitor that offered “dark web scanning.” It was described in a separate Microsoft Research article as follows:

“The feature notifies users if any of their saved passwords have been found in a third-party breach. All this is done while ensuring Microsoft doesn’t learn the user’s passwords.” 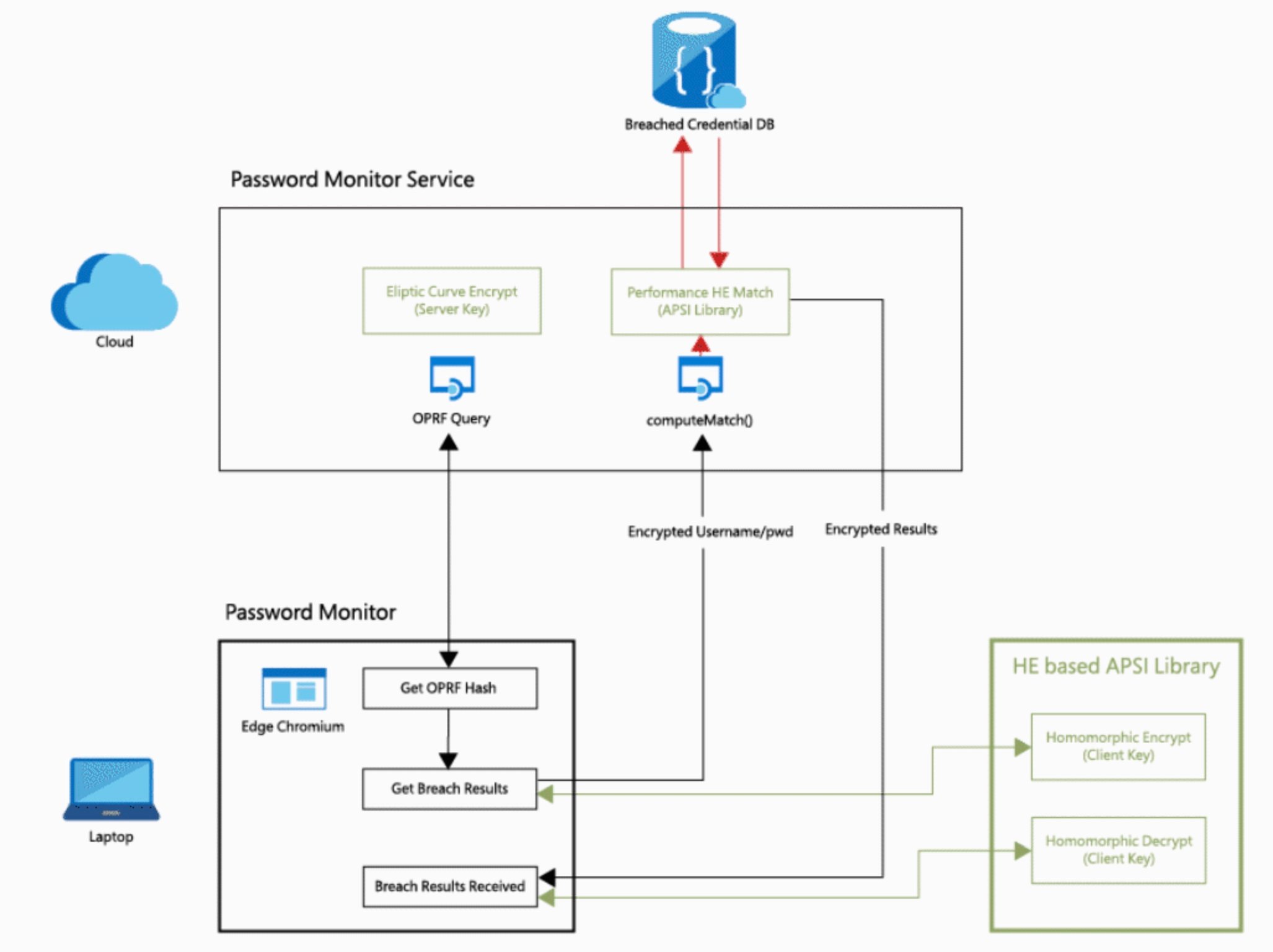 The Password Monitor technology uses a cryptography technique called Homomorphic Encryption (HE), which Microsoft defines as “a special type of encryption technique that allows for computations to be done on encrypted data, without requiring access to a secret (decryption) key.”

Unsurprisingly, the Google Chrome team announced new password management features of its own the very same week — specifically, an upgraded password manager built into its browser.

I should add that Mozilla’s Firefox, the open source descendant of Netscape, has had these kinds of privacy features since 2019. So both Microsoft and Google are relatively late to this functionality.

So, Does Edge Stand a Chance vs Chrome?

As we’ve seen in the history of web browsers, the winners in this market tend to be decided based on business factors rather than technological. Microsoft knows this better than any company, having used its Windows muscle to defeat Netscape in the first browser war. But Google was a quick learner, entering the browser market in 2008 when Microsoft was sitting on its laurels and not innovating. Google then used its own market power — on the web platform, rather than the OS layer below — to become the dominant browser of today (it has about 66% of the desktop market currently).

However, although only a year old, Microsoft Edge is gaining ground in browser market share. Statcounter has it around 8% currently, the same as Firefox and just behind Safari on 10%. Its recent growth is almost certainly due to it being automatically installed and updated as part of Windows 10. So Microsoft is going back to its old tricks of integrating its browser into the Windows ecosystem. The difference this time is that Microsoft no longer has a dominant position in the software market; and indeed it is well behind Google in the search and mobile sectors. That said, Microsoft still has significant leverage in office software and cloud computing — which are increasingly intertwined. It arguably leads Google in both areas (certainly in office software, although it’s much closer in the cloud).

What’s clear in the browser market is that Google Chrome has much more to lose than Microsoft Edge over the next few years. It’s very likely that Edge will soon be second place behind Chrome, and eating into Chrome’s share of the desktop market. And if Microsoft’s core business users start to use Edge at both work and home, well then, we may have a battle on our hands! If that happens, ironically Microsoft will have Google’s technology to thank for it.

Richard MacManus is a Senior Editor at The New Stack and writes about web and application development trends. Previously he founded ReadWriteWeb in 2003 and built it into one of the world’s most influential technology news sites. From the early...
Read more from Richard MacManus
SHARE THIS STORY
RELATED STORIES
Google Brings Rust into Chromium Project How to Support a Million Users on Your Website: A Success Story How to Work with Protocols and Get Started with ActivityPub Crypto Winter Puts Dampener on Web3 Developer Growth Learning Storage and Retrieval with a Hash Function
TNS owner Insight Partners is an investor in: The New Stack.
SHARE THIS STORY
RELATED STORIES
2023 Web Tech Check-in: React Performance, PWAs, iOS Browsers What It's Like to Run a Mastodon Server in the Musk Twitter Era How to Support a Million Users on Your Website: A Success Story Build Your Own Decentralized Twitter, Part 3: Hello Mastodon The 'S' Word: How Frontend Developers Can Embrace Security
THE NEW STACK UPDATE A newsletter digest of the week’s most important stories & analyses.
The New stack does not sell your information or share it with unaffiliated third parties. By continuing, you agree to our Terms of Use and Privacy Policy.