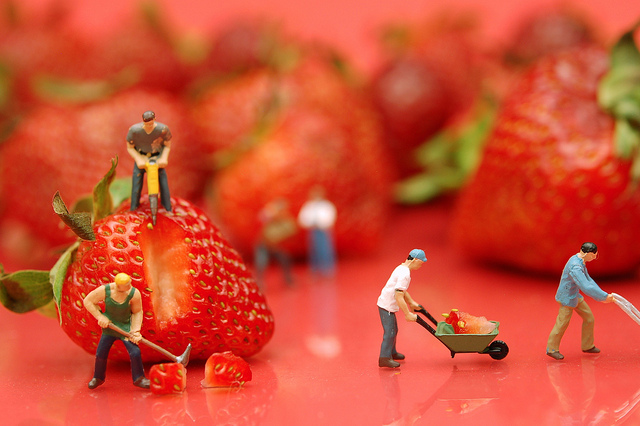 Mirantis plans a major push to accelerate the maturity of OpenStack for the enterprise through a collaboration with Intel and a new $100 million funding round. But in that funding comes some questions about the future of how clusters will actually get managed, and how OpenStack compares to platforms such as Apache Mesos.

The technical collaboration is part of Intel’s Cloud for All initiative to make public, private and hybrid cloud solutions easier to deploy.

In particular, the two companies plan to address performance at scale, storage, network integration and support for big data.

And they better, especially as Mesos and its open source resource management technology continues to gain momentum. That was certainly evident with Verizon’s very public support for Mesos and the Mesosphere Datacenter Operating System over OpenStack at Mesoscon last week.

#Verizon started 50000 containers in 1:12 minutes with #DCOS at #MesosCon. pic.twitter.com/dkATorQIOY

A Bit About OpenStack

OpenStack was created by companies including Intel, HP, Red Hat and Rackspace to compete with the cloud-computing giants Amazon, Google and Microsoft. Business sales related to OpenStack are expetect to top $1.7 billion by 2016, according to 451 Research. It has emerged as the fifth most popular cloud platform, according to Forrester Research.

Mirantis bills itself as a pure-play OpenStack company; it has no agenda beyond making OpenStack better, according to Alex Freedland, co-founder and president. At the same time, its business has been soaring — it has has helped build and deploy some of the largest OpenStack clouds in the world at companies such as Cisco, Comcast, Ericsson, NASA, Samsung and Symantec.

Freedland said the collaboration agreement with Intel is a boon for Mirantis because of Intel’s history of investing in emerging companies it sees with potential to lead the industry. He said that with Intel’s backing it hopes to achieve the success that Red Hat has with Linux and VMware with virtualization.

It’s also vitally important for the industry, he said, because everything developed through the tie-up will go back into the open source community.

“We see the open cloud is the only viable answer to having an alternative to the emerging and very fast-growing public clouds,” he said. “The public clouds are very efficient, they’re innovative, the take advantage of the heterogeneity of their infrastructure, they take all the frills out and optimize it to the bone, they continue to innovate across the stack so they’ll continue to destroy pricing.

“Unless there is a system that works very well out of the box, which is completely open so that anyone can drive innovation inside that and keep prices going down as well, if that ecosystem doesn’t exist or doesn’t work very well, we’re going to end up 10 years down the road with a oligopoly of three large players owning all of computing. …So this is a question of what this industry is going to look like 10, 20 years down the road.”

The company was founded in 1999 by Freedland and Boris Renski. It was one of the founding members of the OpenStack Foundation and remains one of the top contributors to the project.

Mirantis pitched itself as the company that could sort out the best OpenStack technologies for a given implementation, knitting together disparate pieces to get the job done. Its backers included Red Hat, SAP Ventures, Ericsson, Intel and Dell.

Mirantis partnered with VMware in November 2013 to bring OpenStack to VMware’s vSphere virtualized servers and partnered with its investor Ericsson in April 2014 to provide OpenStack software on the Ericsson cloud platform.

However, Mirantis morphed from an OpenStack integrator into a vendor with its own version of the open source cloud framework in October 2013, putting it into competition with Red Hat, which did not participate in Mirantis’ $100 million series B round last October.

In May, Red Hat announced it would no longer support non-Red Hat versions of OpenStack, and no longer is an investor in Mirantis.

Meanwhile, Mirantis and Canonical teamed up in June 2014 to ensure Canonical’s Ubuntu Linux operating system works on Mirantis’s flavor of OpenStack. And a month later, it announced integration with Oracle Linux and Oracle VM.

“We’ve gone from signing about $1 million in new business every month to $1 million every week,” CEO Adrian Ionel said recently.

Gary Chen, research manager for cloud and virtualization system software at IDC, recently pointed out, however, that OpenStack is becoming a crowded market.

“To build a viable business, vendors need to build a solution stack on and around OpenStack; OpenStack all by itself isn’t a business anymore,” he said in reference to Piston Cloud, which went on to be acquired by Cisco.

In an interview with The New Stack, Luke Kanies, CEO and Founder of Puppet Labs, talked about there being no such thing as a vanilla OpenStack.

Web applications and test/development are still the most popular use cases for OpenStack, with virtualization of network functions virtualization gaining ground, according to 451 Research analyst Al Sadowski.

“Due to the complex nature of the projects, managed services and OpenStack distributions are increasingly the deployment choice for those users that remain supportive of the platform after struggling to find success with the do-it-yourself approach. We continue to see OpenStack becoming the de facto open source option for deploying private clouds,” he wrote after OpenStack’s Kilo Summit in May.

He said software such as Kubernetes could present a threat to OpenStack over time because it extends capabilities and integrations, but as with VMs and containers, mixed use is expected to remain the norm.

There’s Kubernetes and Then There’s Mesos

Six months ago, Mirantis and Google worked out an integration of Kubernetes in OpenStack based on the application catalogue Murano, allowing developers to deploy Kubernetes clusters on OpenStack with just a few clicks.

Mirantis has deep expertise and has played a key role in building the OpenStack technology stack. And when enterprises deploy key infrastructure built on open source technologies, like OpenStack, they need partners with the type of expertise Mirantis has to support them, Brandon Philips, CTO of CoreOS, told The New Stack.

“Today, enterprises are automating their data center infrastructure using OpenStack and the next step in that evolution are data centers focused on building and shipping software faster and with higher availability,” he said. “This evolution begins with container technologies such as Kubernetes, which we believe will become core plumbing in the data center. Mirantis is already at the center of this evolution and actively working with container technologies, including working with us to make Tectonic, our Kubernetes plus CoreOS platform, available on Mirantis OpenStack.”

But there are the realities of OpenStack that Adrian Cockcroft of Battery Ventures discussed in the ending keynote at Mesoscon last week.

Adrian Cockcroft, Battery Ventures: At Mesoscon, on the State of OpenStack

In his view, OpenStack is getting co-opted and fragmented by vendors. There are good use cases for OpenStack as a lower cost alternative to VMware, but Mesos is proving itself as suited for scaling clusters across thousands of servers. 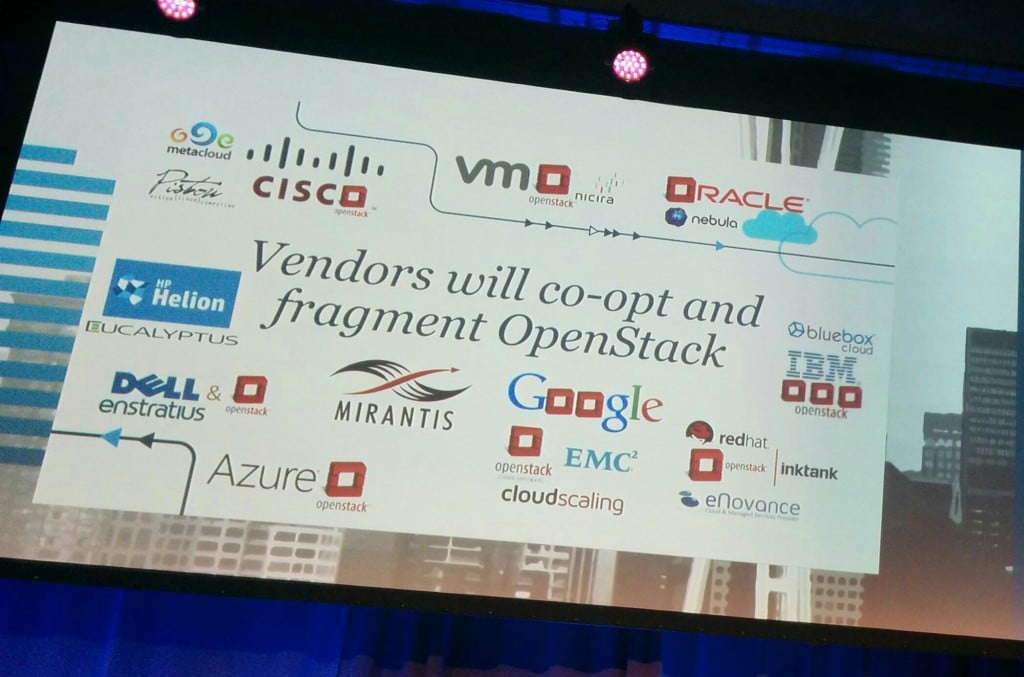 Mirantis is betting on the ecosystem and its partnerships as a way to become the choice for deploying workloads.

“OpenStack is not just the means to some uncertain end. … Just like in the old days, Microsoft did not become really popular until people were able to build applications on top of it — this is the same. We’re building the machinery around OpenStack with major partners like the container ecosystem. … There’s a project inside of OpenStack called Magnum that takes containers abstracted by an OpenStack API and this whole movement on top of OpenStack using Murano … So we’re going broadly after the workloads to make sure we become the ecosystem of choice when people are deploying workloads on OpenStack.”

The New Stack founder Alex Williams contributed to this story.

Feature image:”Berry Hard Work” by JD Hancock is licensed under CC BY 2.0.

Susan Hall is the Sponsor Editor for The New Stack. Her job is to help sponsors attain the widest readership possible for their contributed content. She has written for The New Stack since its early days, as well as sites...
Read more from Susan Hall
SHARE THIS STORY
RELATED STORIES
Takeaways from the ESG GitOps and Shift Left Security Survey Driving Digital Experiences via Cloud Native Applications Can Observability Platforms Prevail over Legacy APM? OpenTelemetry Properly Explained and Demoed Does Your Database Really Need to Move to the Cloud?
Cisco, CoreOS, HP, Red Hat, Mirantis and VMware are sponsors of The New Stack. TNS owner Insight Partners is an investor in Mirantis.
TNS owner Insight Partners is an investor in: Vanilla, Mirantis, Bit.
SHARE THIS STORY
RELATED STORIES
Spotify's Backstage: A Strategic Guide 3 Ways an Internal Developer Portal Boosts Developer Productivity How Boeing Uses Cloud Native Meet SIG Cluster Lifecycle and Cluster API Maintainers at KubeCon Do You Need a Managed Database?
THE NEW STACK UPDATE A newsletter digest of the week’s most important stories & analyses.
The New stack does not sell your information or share it with unaffiliated third parties. By continuing, you agree to our Terms of Use and Privacy Policy.