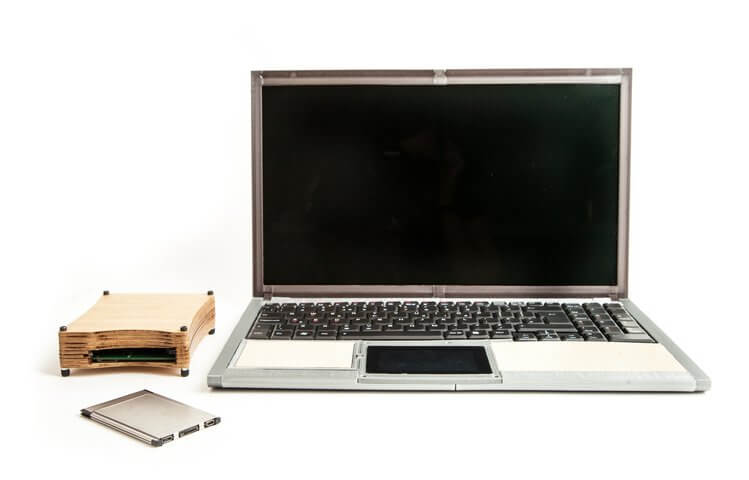 Luke Leighton is a dedicated free software engineer with a much larger goal — trying to jump-start the development of free hardware. His work may ultimately lead to the world’s first free processor, and a new breakthrough for hardware-based privacy protections.

His company, Rhombus Tech, has launched a crowdfunding campaign to build “modular” computers following the EOMA68 standard. With EOMA68, plug-in CPU cards can be swapped into a variety of devices, including interchangeable laptop “casings” as well as a small wooden micro-desktop housing. With a little more development, the same cards could eventually be swapped into cameras, smartphones, tablets, or gaming consoles, according to Leighton’s crowdfunding page.

To do that, he’s first building a motherboard that can be used in a variety of devices, and some separate, recyclable casings.

“Whenever we talk to people about what we’re doing, they genuinely get excited about the idea of eco-conscious, flexible, and upgradeable devices that save them money, give them choice and better security, and reduce e-waste all at the same time,” he wrote on the crowdfunding page.

The “Computer Card” actually fits in your wallet, according to a video on the campaign’s website. And with EOMA68 devices, “upgrades” simply become popping a new Computer Card into your existing device. “It literally takes seconds to install a new CPU card,” reports the Embedded Linux wiki.

The old cards could even be passed along to other devices as hand-me-down CPUs, making it incredibly easy to recycle parts, and keeping some electronic waste out of our landfills. The body of the EOMA68-compatible laptop is also easy to recycle since it’s built from the get-go to be detachable from its motherboard. “Take a stand against the waste of planned obsolescence…” urges the campaign’s promotional video. “Upgrade what you need, when you need it.”

And since they’re generated by a 3D printer, Leighton also predicts one more big advantage: if your laptop casing gets damaged, you can simply print out a replacement.

“Heck, you don’t necessarily have to break anything to have a bit of fun with your laptop: maybe you would like the freedom of being able to CHANGE THE COLOR from silver to aqua to bright orange…” 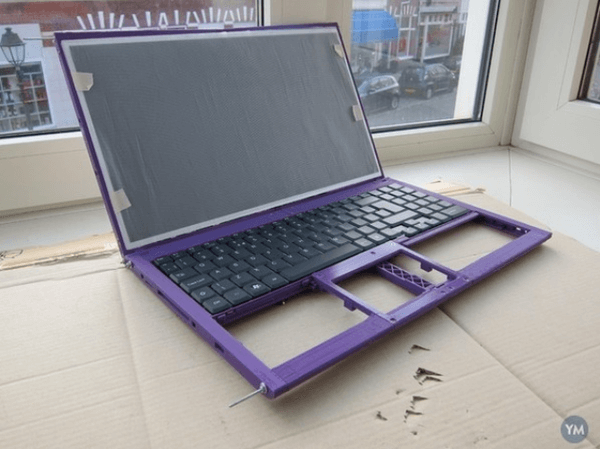 Now think about this: How can you be sure that there isn’t a backdoor built into your current motherboard? That’s the problem with proprietary products, whether software or hardware. You just have to trust that the manufacturer has identified all the security holes and, that they haven’t installed any back doors.

But Leighton’s motherboard would be non-proprietary, “to ensure the integrity of your computer data that exceed anything being sold in North America, Europe (or most parts of the world). And, because we have the complete set of sources, there is an opportunity to weed out the back doors that have been slowly making their way into our computing devices.”

“There is no security without a strong foundation and understanding of what is running on your computing devices,” Leighton wrote.

Linux Magazine called it not only environmentally responsible and security-conscious, but a product that could establish open hardware as a real presence in manufacturing. The magazine looks back at Leighton’s previous crowdfunded projects —  a free tablet and a free-licensed development board — both of which failed, but while giving him contacts with manufacturers (along with some valuable lessons about venture capital).

“If produced, the EOMA68 laptop will be among the first laptops with a free license for everything from the bootloader to the operating system,” the magazine asserted. So besides being environmentally friendly, these devices could also lead the whole free software movement to a new focus on hardware security.

Towards that end, Leighton is even shooting for the holy grail — passing muster with the Free Software Foundation for its coveted “Respect Your Freedom” certification. And his quest is already getting a lot of attention. A story on Phoronix drew over 193 comments, provoking a discussion about just how far he can take this. “You just don’t spend five years designing a standard if the intent is to sell maybe 1,000 maybe 2,000 and walk away,” Leighton responded in the comments section. “This is a *mass-volume* project intended to create a paradigm shift in the whole computing industry, where this is just the start.

The swappable computer card creates some mind-boggling scenarios. It becomes trivially easy to swap in a different operating system. Leighton’s campaign is already offering four different flavors of the GNU/Linux operating system. In addition, “We have people talking on the forums for example about getting two separate Computer Cards, setting one up for work and the other for play, and being able to switch over when they want…” Leighton wrote in a crowdfunding update in early July. One team in Spain is even developing a hand-held gaming console that would be powered by the same plug-in computer cards.

Yes, there’s fewer functions integrated directly into the circuit board, but that also enables the use of a much thinner card (with a limited number of sockets), so “there’s still absolutely no need for fans or any kind of special thermal considerations,” Leighton explained, when his campaign turned up on Slashdot, describing how the heat naturally works its way out of the system. “Passive cooling is all that’s needed, and the SoC [System on Chip] happens to be in contact with the stainless steel case, which happens to be in contact with the aluminum of the keyboard (in the case of the laptop),” he wrote.

Premiums for their campaign include one of the EOMA68-compatible computer cards (with your choice of operating system), a laser-cut wooden case, or a laptop housing kits — including boards, cabling, battery, keyboard for transforming a 3D-printed enclosure into a laptop. And of course, one of the choices is a complete, hand-assembled laptop with an EOMA68-A20 computer card and a 3D-printed case. 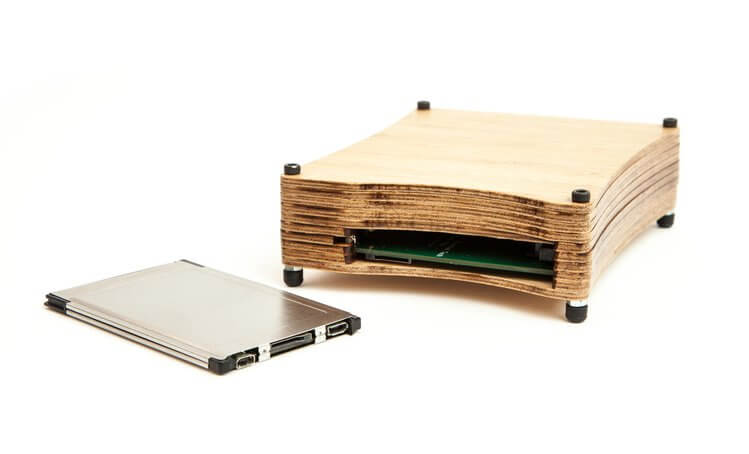 Leighton’s campaign has already raised, at press time, $62,665 from 683 different backers. At first glance, this still leaves him $87,335 short on his campaign’s funding goal of $150,000, with just three weeks left. But that dollar threshold was always just an estimate, extrapolated from the minimum number of computer cards (250) that would need to be built in order to realize any “mass production” cost-savings. And the good news is he’s almost there, according to a project update last week. “[W]e find ourselves in a situation in which we are 85% of the way to our minimum order quantity threshold (213 of 250 Computer Cards pledged for), but only 33% to our dollar threshold ($50k of $150k raised)… ”

It’s a touching reminder that when it comes to this crazy dream of a modular, non-proprietary computer card — he isn’t alone.

“We’re delighted to have so many people believe in what we’re doing. “