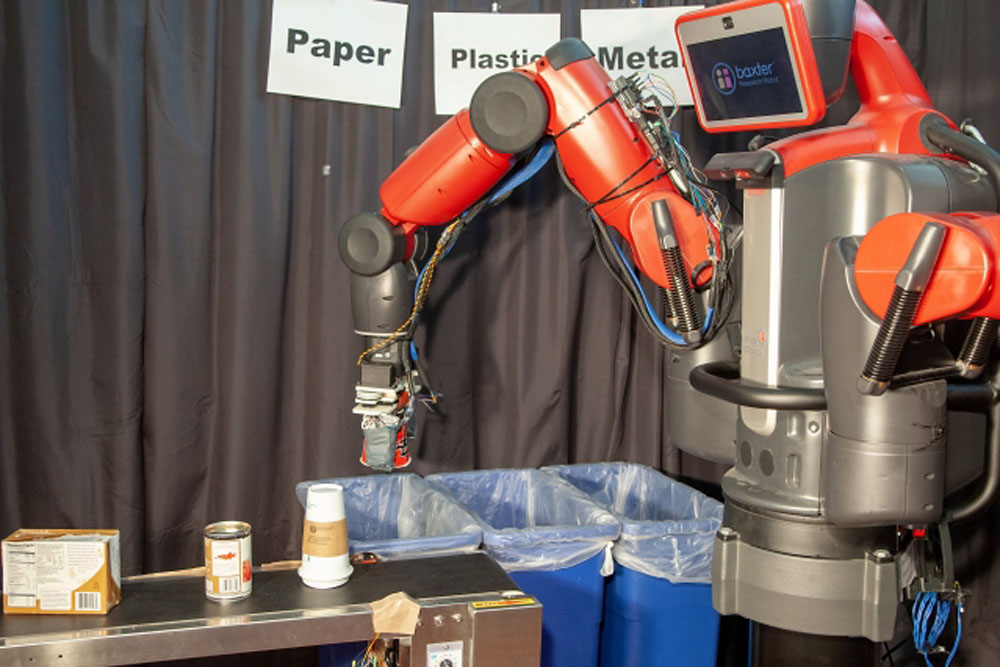 Many of us have gotten used to setting aside our paper, plastic, glass and aluminum in a special bin designated for curbside recycling, so that these materials can be recycled and transformed into new consumer items. But before these materials can be converted into something else, they must be sorted correctly. When incorrectly classified, however, these items will end up joining the approximately 25% of recyclable materials that are sent to landfill each year. It’s an important job that most will find repetitive, dull, and potentially dangerous — not to mention a labor-intensive for human workers and a costly one for the trash companies that employ them.

Of course, the process could be automated, by using robots to better sort the 68 million of tons of recycling that is generated in the United States each year. With the aim of reducing costs and boosting recycling rates, MIT’s Computer Science and Artificial Intelligence Laboratory (CSAIL) and Yale University are developing the RoCycle, a soft robotic add-on gripper that is compatible with a wide range of industrial robotic platforms, and is capable of “feeling” and “seeing” items in order to accurately sort them. Watch and see how it works:

Feeling Is Better Than Seeing

Surprisingly, getting a robot to correctly sense and identify an item is not as easy as it seems. Computer vision technology has come a long way in recent years, but often a machine still can’t distinguish between objects (like metallic-looking plastics) by vision alone. That’s where RoCycle can make a difference: it uses a soft hand that’s made out of Teflon and is equipped with tactile sensors on the fingertips, which allows it to determine an item’s size and stiffness.

“Our robot’s sensorized skin provides haptic feedback that allows it to differentiate between a wide range of objects, from the rigid to the squishy,” explained MIT professor and one of the paper‘s authors, Daniela Rus, in a press release. “Computer vision alone will not be able to solve the problem of giving machines human-like perception, so being able to use tactile input is of vital importance.”

As the team describes in their paper, the RoCycle is a step up from conventional soft robots that use fluidic actuation, meaning that liquid materials or air is pumped in to make them move. However, while this aspect gives soft robots more flexibility over their rigid counterparts, the downside is that this also makes standard soft robots rather fragile and susceptible to being damaged or punctured, especially if they are sorting through a stream of fast-moving recyclables on a conveyor belt.

To protect against possible puncture, the research team’s solution was to use a new kind of material called auxetics for the actuators, combined with regular motors. These eccentrically structured, cutting-edge auxetic materials behave in strange ways: for instance, when stretched, instead of getting thinner like an elastic band might, they actually get thicker. In the case of the RoCycle, the team used “handed shearing auxetic” (HSA) materials on both of the bot’s finger pairs, where when each finger twists to either to the left or right, they expand and interlock, permitting the bot to simultaneously grip and sense an object by touch. 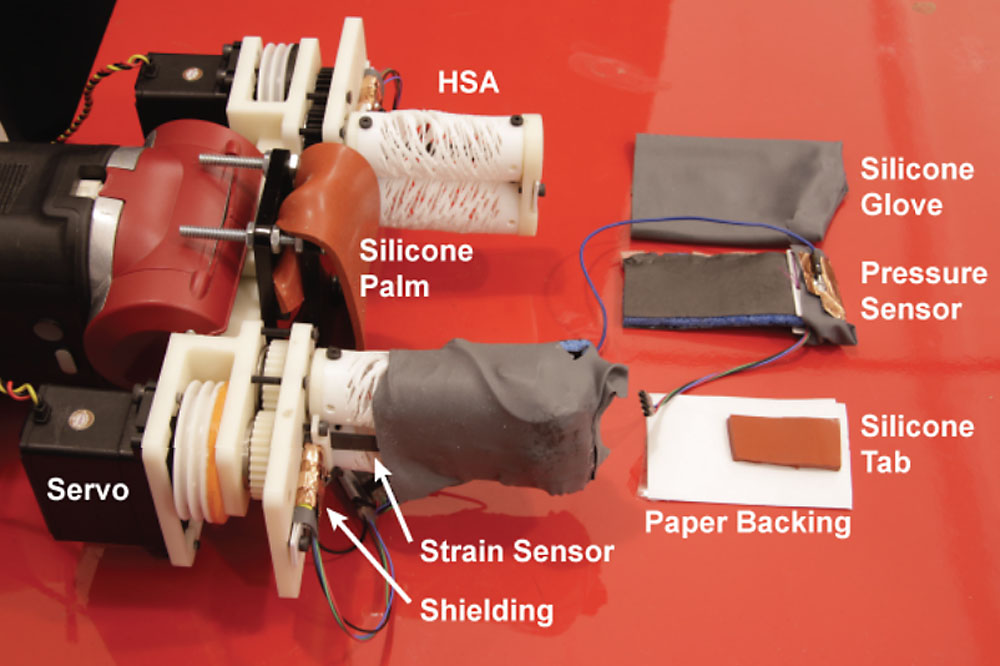 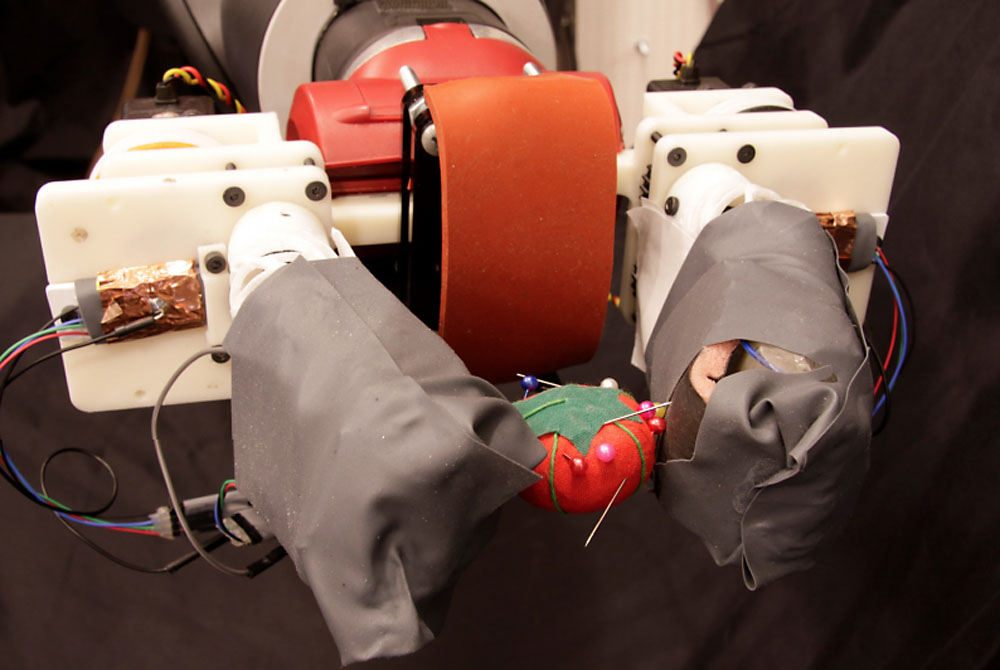 The RoCycle is also outfitted with soft capacitive silicone pressure and strain sensors, which allows it to sense how soft or rigid an object might be. The bot is also capable of sensing whether an item is conductive or not, further permitting it to distinguish between metals and non-metals. In addition, the RoCycle uses an algorithm that classifies paper, plastic and metal objects based on the sensed object stiffness and size. During tests, the team found that the RoCycle achieved an 85% accuracy rate in sorting objects when it was stationary, and was 63% accurate when sorting on a conveyor belt.

So could this be one potential solution to increasing recycling rates? In any case, the team is now working to further develop the system by adding more sensors and improving its underlying classification algorithms. The researchers hope that such a soft robotic add-on can be incorporated into optical sorting systems that are already being used, thus enhancing recycling efficiency and facilitating more sustainable waste-handling practices — something that’s urgently needed around the world.

SHARE THIS STORY
RELATED STORIES
Op-Ed: The Rise of AI Content Generators Is an Affront to Creativity AgStack: Linux Foundation Project Will Bring Farms Online GPTZero: An App to Detect AI Authorship What Data Management Pros Expect to See in 2023 How Ray, a Distributed AI Framework, Helps Power ChatGPT
SHARE THIS STORY
RELATED STORIES
How to Lower Your Company‘s AI Risk in 2023 5 Ways ChatGPT Could Supercharge Chatbots Generative AI: How Companies Are Using and Scaling AI Models Why Your Kubernetes Ship Is Sunk without Machine Learning Why 'Explainable AI' Can Benefit Business
THE NEW STACK UPDATE A newsletter digest of the week’s most important stories & analyses.
The New stack does not sell your information or share it with unaffiliated third parties. By continuing, you agree to our Terms of Use and Privacy Policy.