An MIT-affiliated team of expert volunteers is now doing with the E-Vent, an open source "Emergency Ventilator" that was developed as a prototype a decade ago as part of a class called Medical Device Desig
Apr 8th, 2020 10:30am by Kimberley Mok 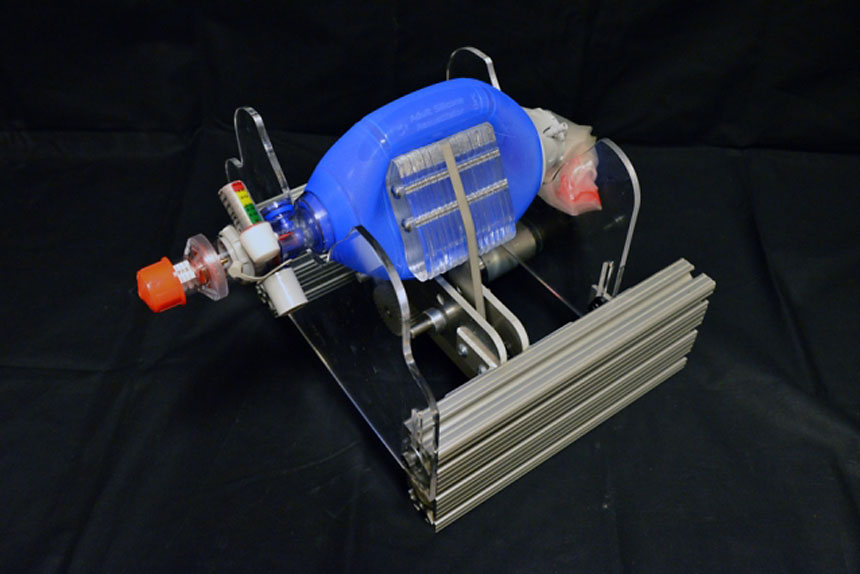 Besides the scarcity of masks, gloves and other kinds of personal protective equipment, one of the most alarming uncertainties in the ongoing COVID-19 pandemic is how to address the shortage of ventilators. Used as a last resort, these life-saving machines help critically ill patients breathe mechanically when they are too sick to do so on their own.

However, with the rising numbers of individuals becoming dangerously sick with the coronavirus, demand for ventilators has quickly outstripped supplies around the world, leading doctors to make heart-wrenching decisions of which patients are going to get hooked up to one of the ventilators that are available — and potentially survive — and which patients won’t, and will therefore likely die. But the problem is that at around $30,000 a piece, these specialized devices are expensive to manufacture even in the best of times.

This is where the open source model could potentially fill in the gap, as an MIT-affiliated team of expert volunteers is now doing with the E-Vent, an open source “Emergency Ventilator” that was developed as a prototype a decade ago as part of a class called Medical Device Design. Built using parts that cost about $100 at the time, today it would only cost about $500 in components. Despite it being mothballed years ago after the end of that class, now a new interdisciplinary team of scientists, doctors, engineers and software developers are currently coalescing around the project to revive and update it for the COVID-19 crisis, and are now seeking FDA approval for the project’s latest reincarnation as a cost-effective life-support device that can be massively deployed.

According to the previous MIT team’s paper, the first E-Vent prototype was originally designed for use in remote rural areas where access to a mechanized machine or reliable electricity might not be possible, as well as in more developed regions where a huge surge in demand for ventilators might become an issue during a large-scale emergency.

“In the developed world, where well-stocked medical centers are widely available, the problem is of a different nature,” wrote the team. “While there are enough ventilators for regular use, there is a lack of preparedness for cases of mass casualty such as influenza pandemics, natural disasters and massive toxic chemical releases. The costs of stockpiling and deployment of state-of-the-art mechanical ventilators for mass casualty settings in developed countries are prohibitive.”

To address this issue, the original design was based on the bag valve mask (also known as an Ambu bag) an inexpensive, self-inflating plastic pouch that can be hand-squeezed by a trained healthcare worker in order to manually help patients breathe, as air is pumped into the patient’s lungs via a connected tube that is inserted into the user’s respiratory tract.

As one might imagine, there are obvious drawbacks to the generic, manually operated bag valve mask. First, it would require constant operation by a human who is competently trained in manually adjusting the time intervals and pressure of each pumping cycle. Secondly, this hand-powered method would have quite a large margin for error, which might ultimately impact patients’ health outcomes negatively — especially when an estimated 1 million cycles are required during a two-week course of treatment using artificial respiration. Thirdly, while Ambu bags can be found in abundance in hospitals, they are relatively fragile, so it’s crucial that they aren’t damaged them during the operation of the device.

To overcome these disadvantages, the initial design of the E-Vent prototype ten years ago integrated a motor-driven system using a mechanized pivoting cam arm that would eliminate the need for a human operator, as well as user-friendly, adjustable input knobs for various parameters like tidal volume and the number of breaths per minute, plus an assist-control mode and an over-pressurization alarm. 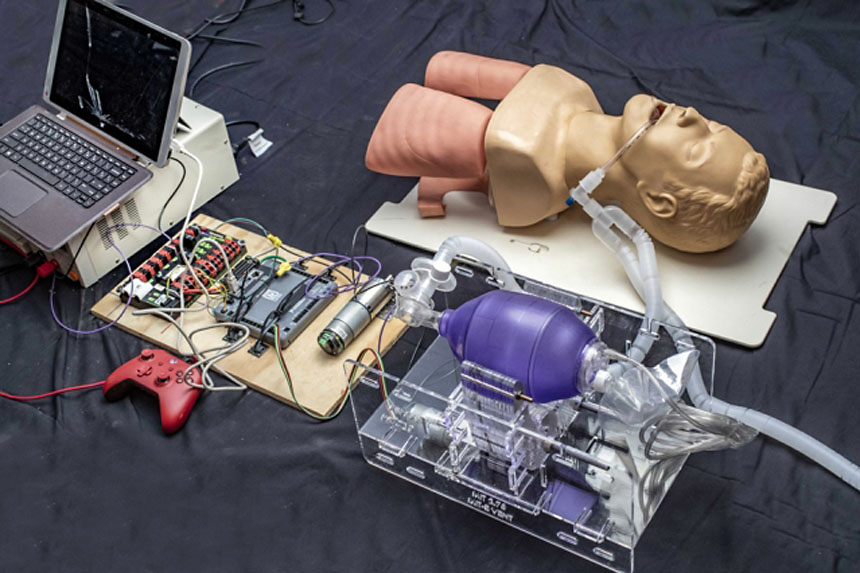 To upgrade the previous prototype so that it will meet the current challenges of the COVID-19 pandemic, the current team is now collaborating around the clock to refine the design and the underlying code, to ensure that the device won’t fail catastrophically during operation. So far, they’ve been testing their improvements, as well as providing important guidelines and required specifications regarding the fabrication and clinical use of ventilators on their website.

The team cautions that building these portable ventilators on a larger, open-sourced scale shouldn’t be done by DIY hobbyists, but by those who have a clear idea of what’s required by FDA regulations. Such machines should also be operated by trained clinicians. 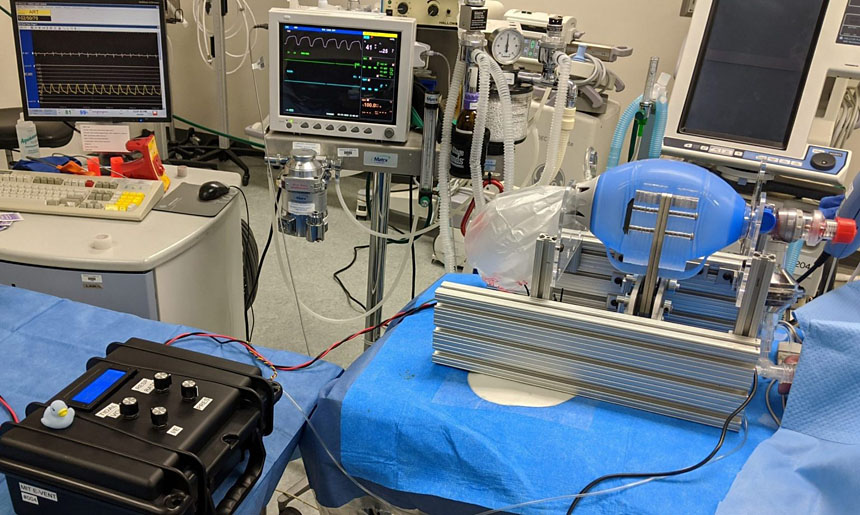 One of the latest versions of the E-Vent undergoing tests.

“We are releasing design guidance (clinical, mechanical, electrical/controls, testing) on a rolling basis as it is developed and documented,” said the team in a press release. “We encourage capable clinical-engineering teams to work with their local resources, while following the main specs and safety information, and we welcome any input other teams may have.”

It may take some time before an approved version of the E-Vent will make an official appearance in hospitals. Nevertheless, developing a short-term solution such as the E-Vent — which would free up conventional ventilators for more critically ill COVID-19 patients — is an idea that ultimately makes a lot of sense in the long-term, and it’s one that will likely prove useful again in future emergencies.