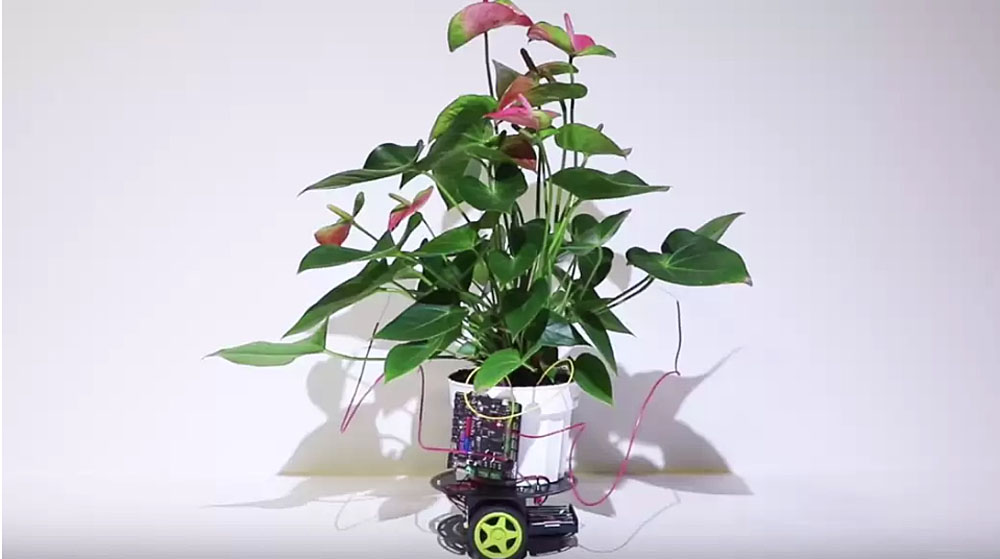 To us bipedal bags of meat, most plants seem like relatively passive organisms, miserably rooted in place and forced to endure whatever climatic conditions are thrown at them. But upon closer inspection, we will find that plants are actually quite amazing, often exhibiting mind-blowing abilities like photosynthesis, bioluminescence and even predatory behaviors that are the result of millions of years of evolution.

So yes, plants are pretty neat — but by and large are still stationary lifeforms. But what would happen if plants were merged with machines?

Seems like a crazy idea, but the notion of augmenting living organisms with robotics isn’t new. Now, researchers from the MIT Media Lab are proposing something they call “cyborg botany,” where plants are augmented with sensors and actuators to create a “half-plant, half-machine” so that can act on its own, in this case, moving itself towards sources of light. Watch this plant-machine hybrid go:

Nicknamed Elowan, this cybernetic plant is interfaced with a set of robotic wheels through a series of silver electrodes that detect bio-electrochemical signals from the plant, which are a natural response to changes such as light, gravity, stimulation, temperature, damage, and other factors. While plants will naturally and ever-so-slowly grow themselves in a way that maximizes their exposure to life-giving light, in this case, Elowan is capable of acting upon its own bio-electrochemical impulses — its “plant brain,” if you will — by autonomously wheeling itself toward the light.

To achieve this, Elowan’s natural electrical signals are amplified In the team’s experiments, the cybernetic plant was placed in between two sources of light, alternating between on and off. As one light is turned off and the other turned on, Elowan’s pores (stomata) open and its cells depolarize. The electrodes sense these changes in the signals, which are amplified with an instrumentation amplifier and routed into the robot microcontroller, which has been programmed to react by turning the wheels in the correct direction, rotating its 2WD Drive Robot base away from the extinguished light, then moving toward the illuminated source. An emerald gem (Homalomena) plant was chosen due to its large, waxy leaves and its strong output of electrical signals. 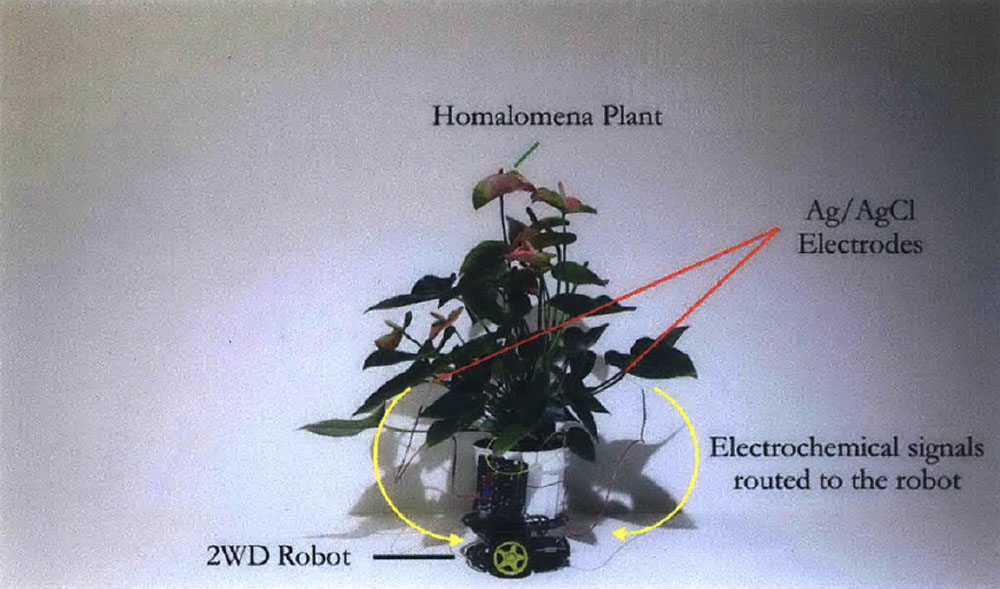 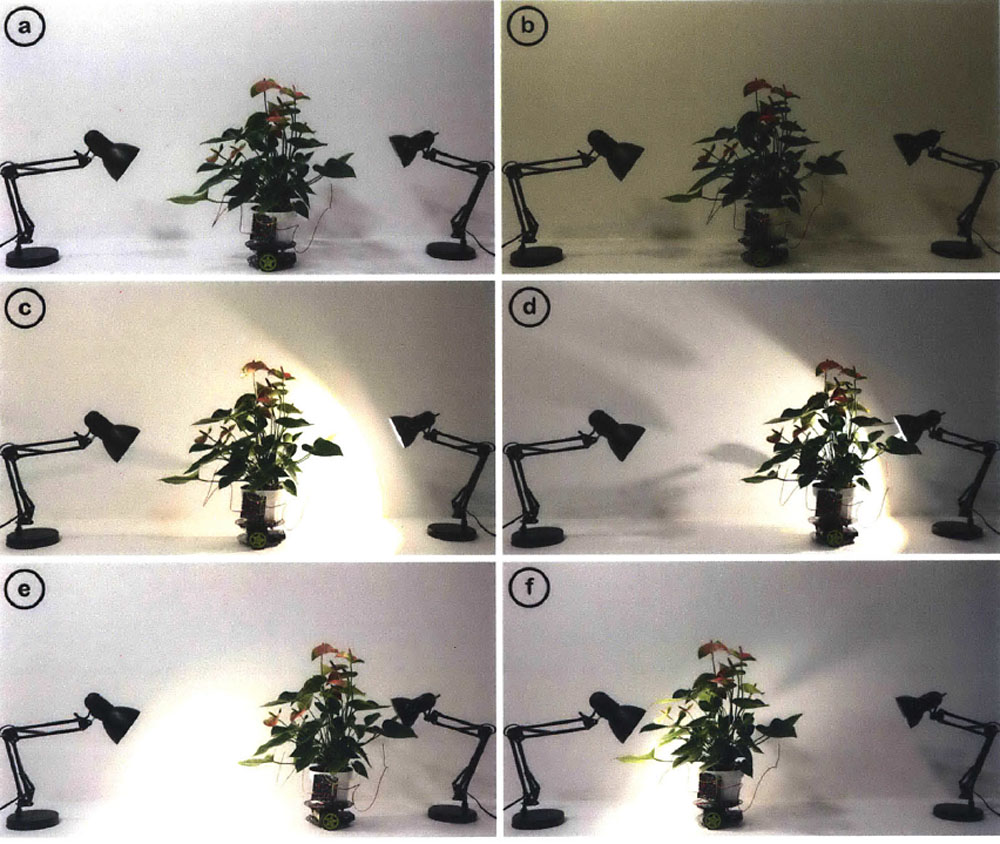 The idea here was to build upon plants’ natural characteristics, to imagine a more sustainable world where bio-hybrids might be the norm, and where plants and machines can exist symbiotically.

“Plants are active signal networks that are self-powered, self-fabricating, and self-regenerating systems at scale,” wrote project researcher Harpreet Sareen. “They have the best kind of capabilities that an electronic device could carry. Instead of building completely discrete systems, the new paradigm points toward using the capabilities that exist in plants (and nature at large) and creating hybrids with our digital world.”

“Plants are active signal networks that are self-powered, self-fabricating, and self-regenerating systems at scale,”– Harpreet Sareen

But the idea of “cyborg botany” doesn’t stop at autonomous bio-hybrids that can move around of their own will. Sareen also envisions that such augmented plants could someday form the basis for a kind of “automated arbortecture,” where plants are used to create a new kind of self-growing, self-repairing architecture. Like the ancient root bridges seen in India, plant-based buildings and infrastructure could grow and transform themselves as needed, leading to more self-sufficient and resilient cities, resulting in an “alternative ecology” that merges the best of both plant and machine. We might also have “cyborg gardens” where edible plants would be capable of cultivating themselves, so that we might harvest them as food later. 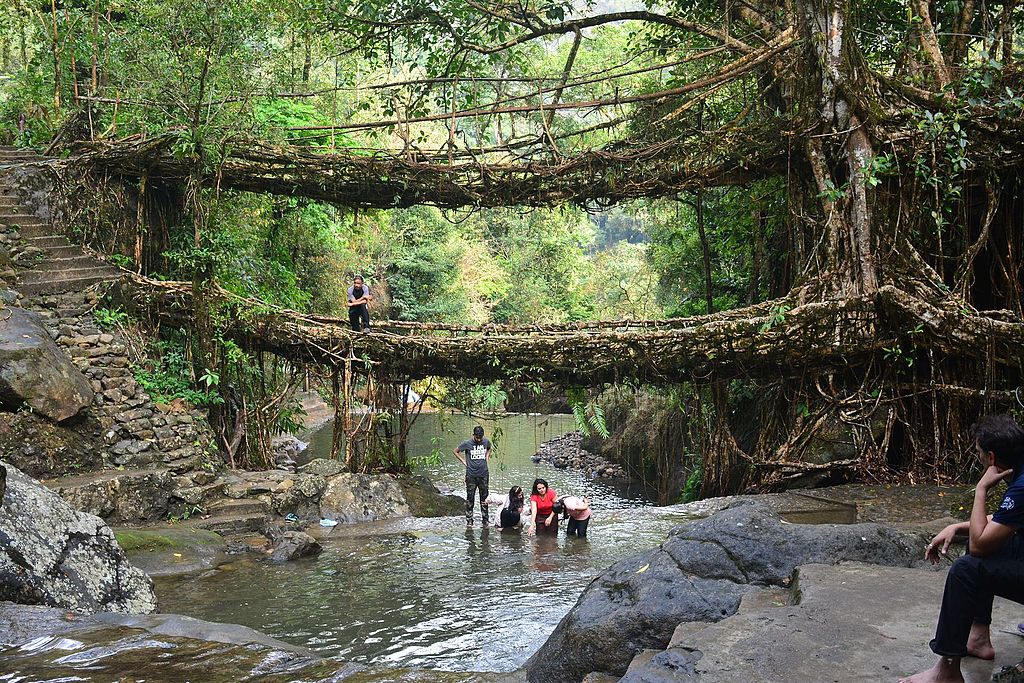 The project points out that in the future, a finer level of sensory data might be collected through the use of injected nanomaterials. “Nanomaterials could also act as effectors with an element release triggered through electromagnetic waves,” explained Sareen. “Such research altogether would be a step in building a bidirectional digital to biology bridge; integrating our ecology with the digital systems.”

Ultimately, the work suggests that a more sustainable future lies in the creation of a new “techno-plant” society, says Sareen: “An augmented nature, as a part of our design process is only the beginning. The merger of plants and machines will allow us to realize capabilities that we could never achieve in the silicon world alone.”

To find out more, read the paper, and visit the project page.

SHARE THIS STORY
RELATED STORIES
CES 2023: Robots, Astronauts, Schwarzenegger and Flying Cars Platform Engineering Won’t Kill the DevOps Star Entrepreneurship for Engineers: Building for Customers’ Love How to Get Started Filling 3.4 Million Cybersecurity Jobs How Will Working in Tech Change in 2023?
SHARE THIS STORY
RELATED STORIES
SRE Housekeeping: Where to Get Started for New Hires Entrepreneurship for Engineers: Avoiding Feature Bloat Java's James Gosling on Fame, Freedom, Failure Modes and Fun Platform Engineering Won’t Kill the DevOps Star Wellspring of Creativity: Why Public Domain Matters
THE NEW STACK UPDATE A newsletter digest of the week’s most important stories & analyses.
The New stack does not sell your information or share it with unaffiliated third parties. By continuing, you agree to our Terms of Use and Privacy Policy.