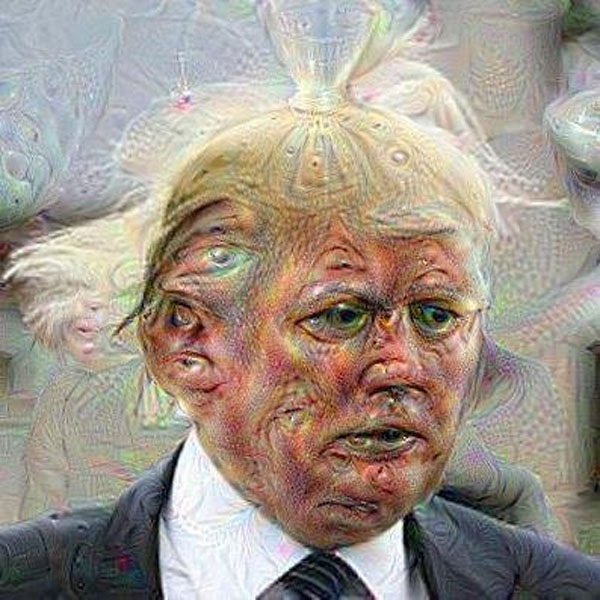 Throughout what seems to be a really, really long election year, American presidential nominee Donald Trump has posted no shortage of inflammatory remarks on Twitter, ranging from put-downs of fellow Republicans, to accusations of bias and threats against the media, to a delirious shaming attempt lobbed at a former Miss Universe at 5:30 AM.

But now, The Donald may very well be out-Trumped by @DeepDrumpf, a Twitter bot that uses deep learning algorithms to help it learn and emulate the Republican presidential candidate’s off-the-cuff remarks with an eerie uncanniness. The bot’s name is a shrewd allusion to a recent Last Week Tonight segment where comedian host John Oliver makes a compelling case for people to “rebrand” Trump by calling him by his family’s ancestral name, Drumpf.

@DeepDrumpf was launched back in March by Bradley Hayes, a robotics researcher at MIT’s Computer Science and Artificial Intelligence Lab (CSAIL), and it is now also running its own mock presidential campaign. But it’s actually for a good cause, as its covert and noble goal is to raise $25,000 for Girls Who Code, a non-profit that aims to increase the number of girls and women in computer science.

“I wanted to choose a non-political charity that focused on getting kids more involved in computer science,” said Hayes, who believes that the gender gap in the fields of science and tech is problematic. His idea is to get kids interested in machine learning by using @DeepDrumpf as the (rather incendiary) bait. Check out these Trump-like nuggets that are being served up by this artificially intelligent bot:

[We'll fix the economy by] selling out veterans. I will get the power, from some core of hell. I will be the most powerful. #debatenight

I can destroy a man's life by firing him over the wall. That's always been what I'm running, to kill people and create jobs. @HillaryClinton At first glance, it’s pretty convincing, thanks to the data that’s constantly being fed into @DeepDrumpf — namely, hours of transcripts culled from the candidate’s speeches and debates.

“The algorithm essentially learns an underlying structure from all the data it gets, and then comes up with different combinations of the data that reflect the structure that it was taught,” explained Hayes.

The bot uses what is known as a recurrent neural net, where the previous outputs are fed back into the system to come up with the next output.

For instance, when the bot is is fed, or “primed”, with a certain letter like “M”, the next most likely letter to follow as the bot runs through the permutations over and over again will be “A”, “K” and “E”, to ultimately form “MAKE”, which will most probably be completed by the letters making up the rest of Trump’s motto for his campaign: “America Great Again”, along with other choice tidbits like “build a wall” and “we have no choice”.

Since these slogans are repeated so much in the transcript data, it’s more likely that the bot will arrange its words to match, and it will then continue this probabilistic letter-finding process until it has filled up the tweet’s 140-character limit.

In the field of machine learning, deep learning algorithms are used to ‘train’ artificial neural networks, which are inspired by the structure and function of the human brain. They can be used for natural language processing, image recognition, language translation, writing music and game playing, just to name a few.

According to Hayes, @DeepDrumpf began as a “side project” investigating some statistical modeling techniques relevant to robotics.

“It turns out that the same technique that is behind DeepDrumpf works in a lot of robotics domains, because it’s a modeling technique that tries to learn the structure of sequential information, or sequential data,” Hayes told Inverse. “Natural language is a great example of sequential data, where the structure of the sentence is fairly consistent: there are rules, and there is underlying structure to all the data that you’re getting.”

As it happened, Hayes was inspired by previous work on a training model that could produce lines of poetry in the style of Shakespeare, as well as a myriad of speech analysis reports that placed Trump’s use of grammar and vocabulary somewhere on a level between that of a seventh- and third-grader — something that would make training an artificial neural network that much easier.

“Trump’s language tends to be more simplistic, so I figured that, as a modeling problem, he would be the most manageable candidate to study,” said Hayes.

While Haye’s project has scientific merit, @DeepDrumpf’s stark, machine-logic articulations may also point to something genuinely much more disturbing that’s lurking underneath the candidate’s bluster. Since it’s trained on the language of someone who many say is an opportunistic demagogue, it could very well be that @DeepDrumpf is saying exactly what Trump might be holding back — a Twitterbot that reads between the lines, and really says it like it is. With only a few days to go in a highly controversial election, @DeepDrumpf’s bald-faced declarations make it all somehow sound even more ominous.

We don't win anymore. In our country we must have no choice. My presidency, the future of American terror. #debatenight

Read more over at CSAIL, @DeepDrumpf and Deep Drumpf 2016.

Setting Up a VPN Between IBM Cloud VPC and Your Home Office
December 31, 1969