Researchers have found a way to get robots to work together to 3D print larger structures.
Sep 27th, 2018 11:00am by Kimberley Mok 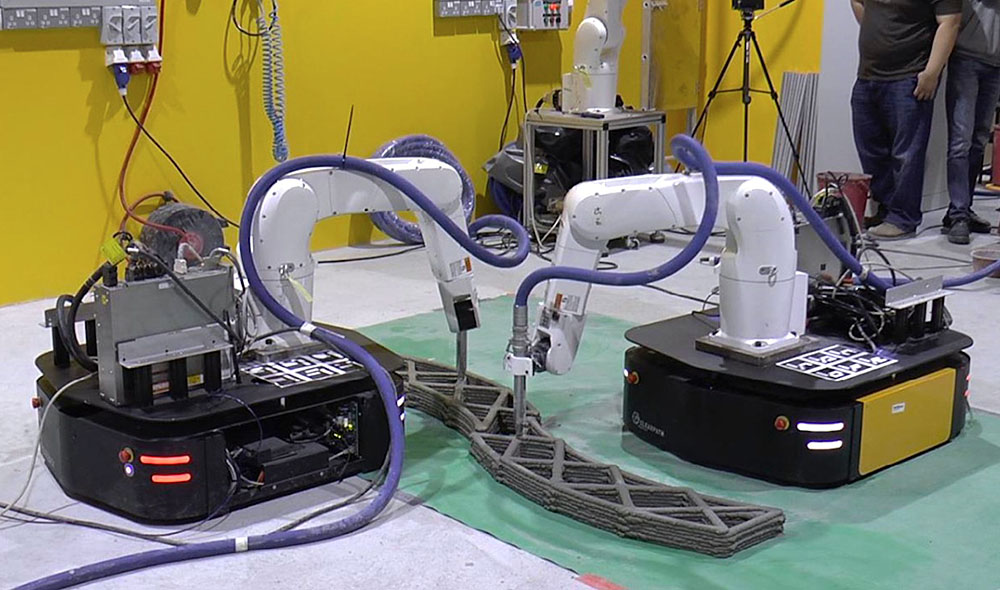 From printing customized circuit boards, diffractive neural networks or nutritious food, to being used for AR-assisted interactive modeling, we’ve all heard about how three-dimensional (3D) printing has the potential to change the game in a number of fields. Integrating some kind of additive manufacturing into the building and construction industry is another obvious step, and while we’ve seen some pretty cool prototypes of 3D printed habitable structures (like this affordable home made out of earth and this one made of salt), there haven’t been too many large-scale examples of 3D printed buildings.

The reason for this rather sad state of affairs is found in the 3D printers themselves. In order to print something, that object needs to be within reach of the printer nozzle, whether that’s inside your typical boxy 3D printer or one that uses a gantry system. But even these can only be so big — as one might guess, it’s impractical to have 3D printers that are larger than the building themselves. Another possibility is printing the pieces of a building separately and assembling them together, but this can be a complex, logistical headache and there’s the danger that the points where these pieces are assembled won’t be as strong.

But there might be a better way: researchers from Singapore’s Nanyang Technological University (NTU) have come up with a solution that involves a group of mobile robots that can be programmed to 3D print a structure in an agile and cooperative fashion. Watch:

According to the team, this form of coordinated 3D printing by multiple, mobile robots might be better known as swarm printing. “What we are seeing [in the video] is two mobile robots concurrently printing a concrete structure,” explained NTU assistant professor Pham Quang Cuong on Digital Trends. “The two robots first navigate from their base station to the printing site, then print by depositing a special type of cement layer by layer in a coordinated manner, and finally return to their base stations. The whole sequence was performed autonomously, [with] no human teleoperation.”

The team’s software was the key to the whole experiment. According to their published study in Automation in Construction, the team’s approach had the robots plan their movements within the designated construction area ahead of time, and routing their paths toward pre-determined start and end positions. To accomplish this, a 3D model of the building design was uploaded into the system, and the robots then used motion planning, simultaneous localization and mapping (SLAM) and adaptive Monte Carlo localization (AMCL) algorithms to allow them to navigate, construct and update a map of their environment, including the positions of other robots, so that they wouldn’t collide into each other. 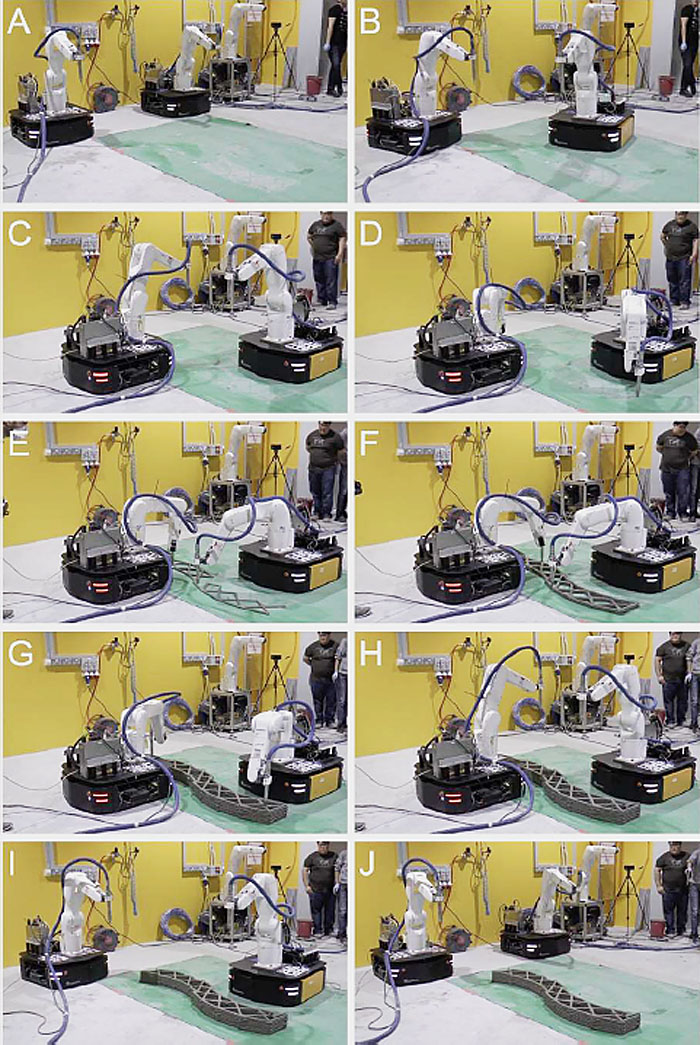 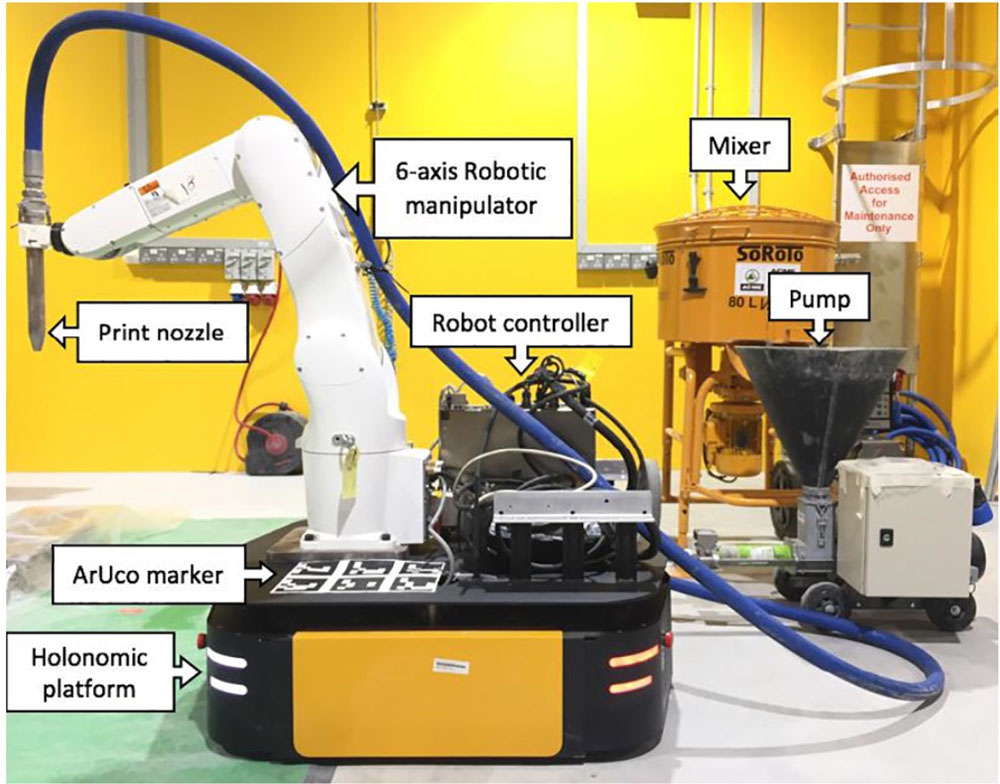 The robots used in the experiment itself were pretty neat — consisting each of a 6-axis robotic arm mounted on a omnidirectional (holonomic) mobile platform, there are sensors and a stereo camera that gives it visual input, and a print nozzle (attached to the arm) that pumps out cement-like material.

As seen in the video, the robots quickly print out a relatively curvy specimen, which would have been difficult to achieve with other conventional 3D printers. As the researchers point out in their paper, the piece was printed out in its entirety by the two robots at the same time, as printing it part by part would have affected curing time and therefore could potentially have structural weakness at the joints where the new piece met the previously printed piece. 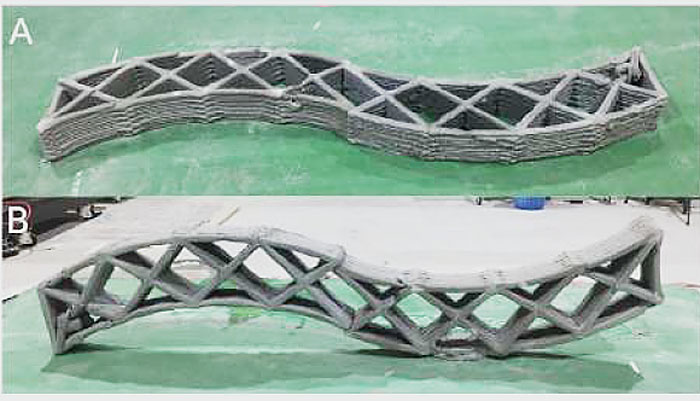 Obviously, this is in an early stage of development, as the robots aren’t moving while they are printing, and it may be difficult to deploy the robots as they are now onto actual construction sites.  The researchers are now working to improve accuracy and autonomy of the robots, as well as further scaling up the system, possibly incorporating platforms with scissor lifts. If it all works out, someday we might see more automation in the notoriously inefficient building and construction industry, and potentially see buildings constructed in places hostile to humans, such as the Moon or on Mars.