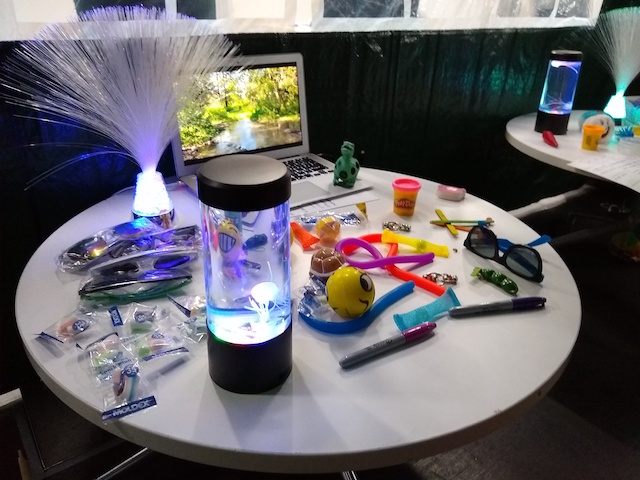 The 2019 Mozilla Festival, which took place on Oct. 27-29 at Ravensbourne University in London, England brought together many individuals from a variety of backgrounds to share in a weekend of discussion surrounding a variety of topics such as internet health, openness, decentralization, and for the first time, neurodiversity.

Arriving at the Neurodiversity Space early Friday morning, I was initially greeted by an expanse of blank walls and open, airy rooms filled with natural light. This blank canvas was transformed by the work of the “Wranglers of the Space,” including self-identified “DevOps and process nerd” Mozilla Systems Engineer Lucie Daeye, BBCCAPE (Creating a Positive Environment) Head of Cognitive Design Sean Gilroy, BBC UX Designer and BBCCAPE co-founder Leena Haque, and psychology university student Wrangler Kristie.

Their work was invaluable when it came to setting up not only an amazing series of sessions but a welcoming and soothing space for individuals both neurodivergent and neurotypical to escape the hustle and bustle of nine floors of MozFest, even if only for a moment. Sean, Leena, Lucie, and Kristie worked tirelessly on Friday evening to transform the space by erecting a temporary gazebo, in which they added beanbags, chairs, and tables full of sensory items such as fiberoptic lamps, artificial aquariums with fake jellyfish swimming in a leisurely pattern, Play-Doh, earplugs, stim toys, hand puzzles, and more. The Wranglers also created an eye-catching mood board that encompassed the overall feel of the space, which announced our presence in both a literal and metaphorical way that was left open to interpretation depending on how one looked at the artwork. 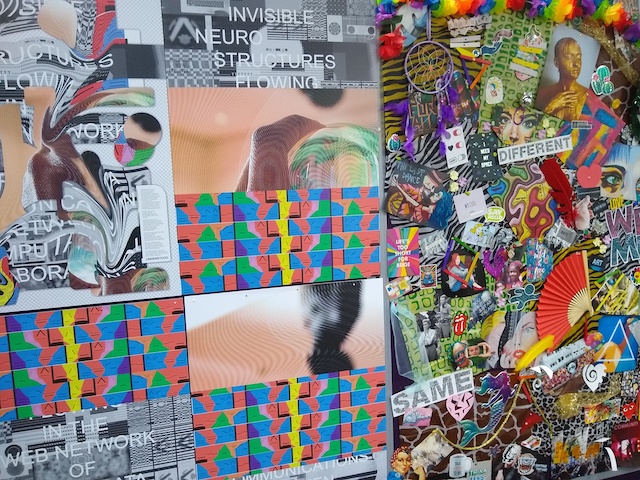 I began my time in the Neurodiversity space by getting to work with my hands in the workshop, “Materialising Mental Health.” Dan Lockton, an assistant professor and chair of design studies at Carnegie Mellon University, as well as director of the Imaginaries Lab, had set up an amazing space full of glass vials with multicolored sugar, inviting participants to “create their own potion,” layering the sugars in what was a wearable, inspiring participants to empower their own positive thinking by “activating,” the potion with a certain action, emotion, or thought. Participants could also partake in the empathy rock garden, leaving messages on larger rocks, and using smaller white stones placed next to these large rocks to let others know they weren’t alone. By the end of MozFest, the rock garden had a twisting, weaving highway of individual white pebbles linking every rock to one another, an impactful visual about connection, community, empathy for others, and the human experience as a whole. 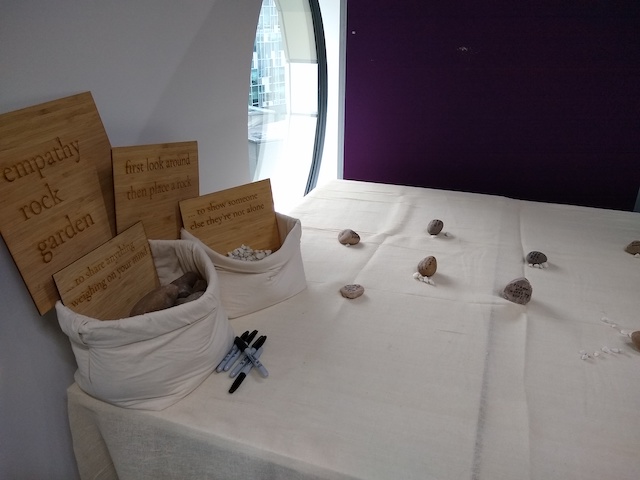 The beginning stages of the empathy rock garden at MozFest 2019

The next session I attended was a discussion surrounding how we can use augmented reality to aid in the education of neurodivergent individuals. Joan Waweru of the University of Nairobi walked participants through an introduction to molecular symmetry, using the Augment application and QR codes that participants scanned to see individual molecules such as water in an Augmented Reality and three-dimensional view, where they were then able to manipulate and observe the molecule’s model in three-dimensional space. Waweru noted that this approach was extremely beneficial in her own learning of chemistry, “So by the time you’ve caught up, your professor has already moved on to like three other symmetries, and you’ve already been left behind. So, I decided to try to use technologies like AI to help me visualize.”

In another interactive presentation, Red Hat Technical Support Engineer and Regional Neurodiversity lead Prathamesh Chavan used artwork to help walk participants through visualization how application developers approached password management for individuals with dyslexia. “So a few weeks back, my friend had opened a startup. He was working on password generation for people with dyslexia. Getting context, and giving some context. They asked me if I wanted to create an application that might have a picture, some statements, and I wanted to then derive a password out of it. So what I did was, this password was derived from the statements as well as the picture,” Chavan explained.

“What is meant by ‘internet health’ is that technology needs to be for people.” — Red Hat’s Pranshu Khanna.

“People with dyslexia, they may experience difficulty reading, listening, or understanding visual information. So when we are doing this activity, we are creating visuals, converting them into regions, and converting these regions into statements,” Chavan added. “Then, we are analyzing those statements into six or seven simple words. we used these statements we created to send a message to a server, so when someone forgets their password, all they have to do is send the last two digits to their favorite number via text.”

My own session, “Smashing the Barriers to OSS Contribution,” focused on how we can make the open source contribution process more accessible for neurodivergent individuals. The number of attendees was perfect for a workshop, and led to a great discussion out of which I am looking forward to collaborating with attendees on to create a guide we intend to share with the community. I spoke with another neurodivergent individual attending MozFest, which led to an amazing offer of developing a website for the guide, which I am looking forward to working on alongside my presentation’s wonderful attendees.

Super energized by @kiran_oliver’s #MozFest workshop on how #OSS communities can be more welcoming of #nuerodiversity — and just to be more #inclusive and welcoming of mostly volunteers anyway! Will tweet my significant (handwritten) learnings over the next few days in thread… pic.twitter.com/Uy2YQrjJlH

I rounded out my time in the Neurodiversity Space by attending a session called, “I Tried Cleaning My Room,” by Mozilla Representative Pranshu Khanna. In this talk, Khanna detailed his own lived experience getting diagnosed with ADHD, and his struggles with executive dysfunction given the dopamine-inducing UX design of social media applications today. “In an ADHD brain, it’s like 30 TV channels all running at once. All the sounds, all the images, it’s just running, running, running,” Khanna said, going to add that, “For an ADHD brain, it becomes easy to get lost in the technology, drawn into it and away from the real world. Basically, sure, it’s a choice, but when you’re trying to get away, it’s hard. For example, I don’t like those red circles on Instagram, so even when I upload a story it’s proven that I re-open the app within five minutes because I don’t like it interfering with the UI,” said Khanna. 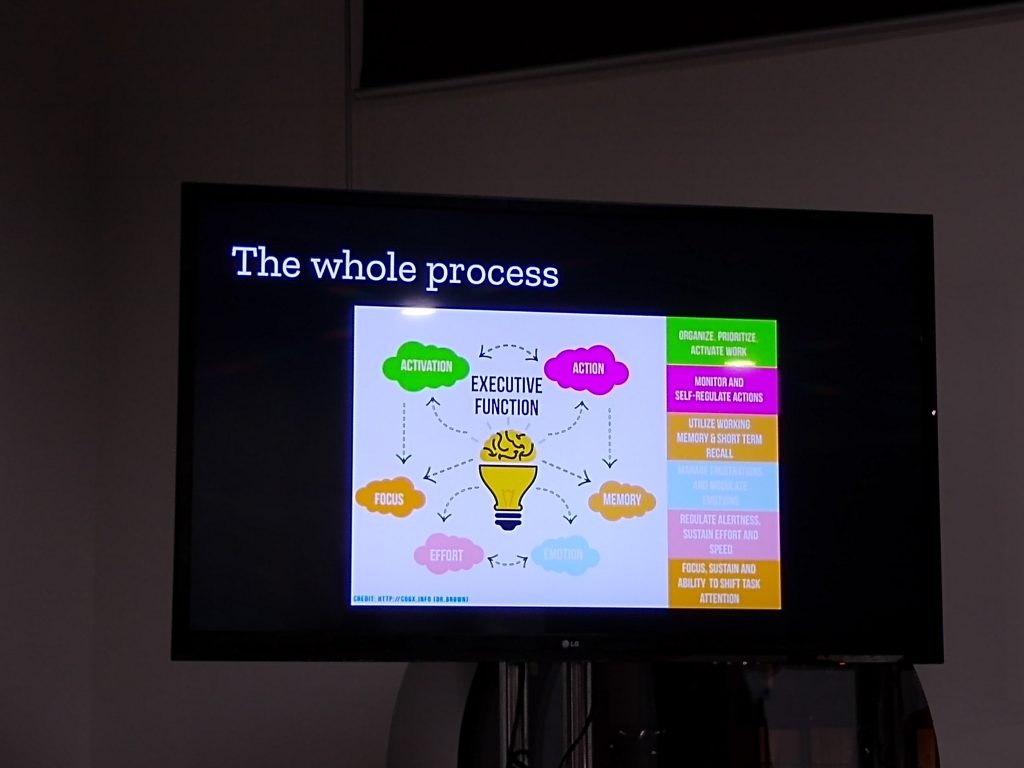 A slide detailing the process of executive dysfunction

As the discussion went on, Khanna detailed how his difficulties with executive dysfunction and working with technology, despite loving it, was extremely challenging for him. “That’s where the inspiration for this talk comes in. I’m a person who works in tech, who loves technology and has always wanted to work with technology, but if I’m going to work with my mobile phone, my laptop, and my TVs running all around me, I lost like three months of my life. I got completely lost into things where I would not socialize, I wouldn’t go out. This is why AI needs to be mindful. That’s what we’re trying to be mindful of because what is meant by ‘internet health’ is that technology needs to be for people.”

Feature image: The sensory items available for visitors to the Neurodiversity space at MozFest 2019.

SHARE THIS STORY
RELATED STORIES
Platform Engineering Won’t Kill the DevOps Star Java's James Gosling on Fame, Freedom, Failure Modes and Fun SRE Housekeeping: Where to Get Started for New Hires How Jit Builds a Platform Engineering Mindset in the Cloud Why Your Code Sucks: Common Excuses for Bad Programming
SHARE THIS STORY
RELATED STORIES
Snack Stack: Turning Winter Comfort Food up to 11 How We Manage Incident Response at Honeycomb How Will Working in Tech Change in 2023? 2023 Will Be the Year FinOps Shifts Left Toward Engineering How to Get Started Filling 3.4 Million Cybersecurity Jobs
THE NEW STACK UPDATE A newsletter digest of the week’s most important stories & analyses.
The New stack does not sell your information or share it with unaffiliated third parties. By continuing, you agree to our Terms of Use and Privacy Policy.