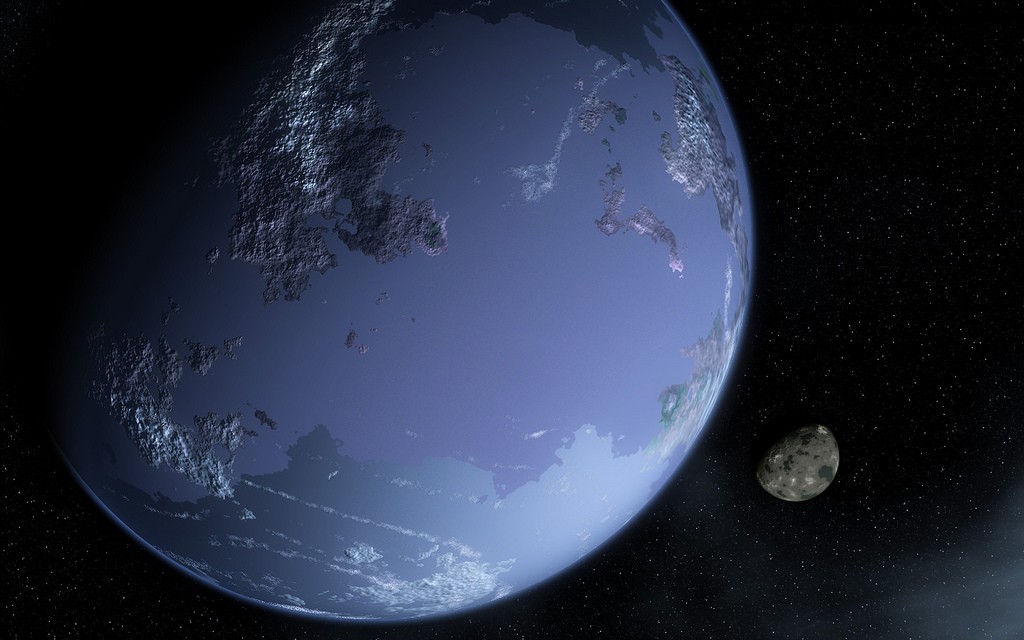 3D printing is already revolutionizing design, manufacturing and distribution on Earth. Now it’s also changing how tools, replacement parts and even buildings will be made in outer space — saving time, money and possibly even lives.

Space exploration today lacks much of the youthful, idealistic zeal of the 1960s, as those early, exhilarating days eventually gave way to the sobering reality of huge cost overruns and much-publicized disasters. Nevertheless, the aerospace industry has endured, and it continues to innovate and push the limits of human possibility, with a little help from 3D printing.

With the aim of reducing costs for future missions on other planets, NASA recently 3D printed its first, full-scale rocket engine part out of copper. But it’s not any old copper part: NASA’s intricately designed copper rocket engine liner is exceptional in that it has been carefully designed to withstand both extreme hot and cold temperatures.

To create this engine liner, a selective laser sintering machine in the Materials and Processing Laboratory of NASA’s Marshall Space Flight Center melted together 8,255 layers of copper powder over the course of 10 days and 18 hours. The material is GRCo-84, a copper alloy developed by materials scientists at NASA’s Glenn Research Center in Cleveland, Ohio, and has been printed with more than 200 inner channels of complex geometries that will allow cooling gases to recirculate within — preventing the liner wall from melting during combustion as temperatures on the liner’s exterior will rise above 5,000 degrees Fahrenheit. 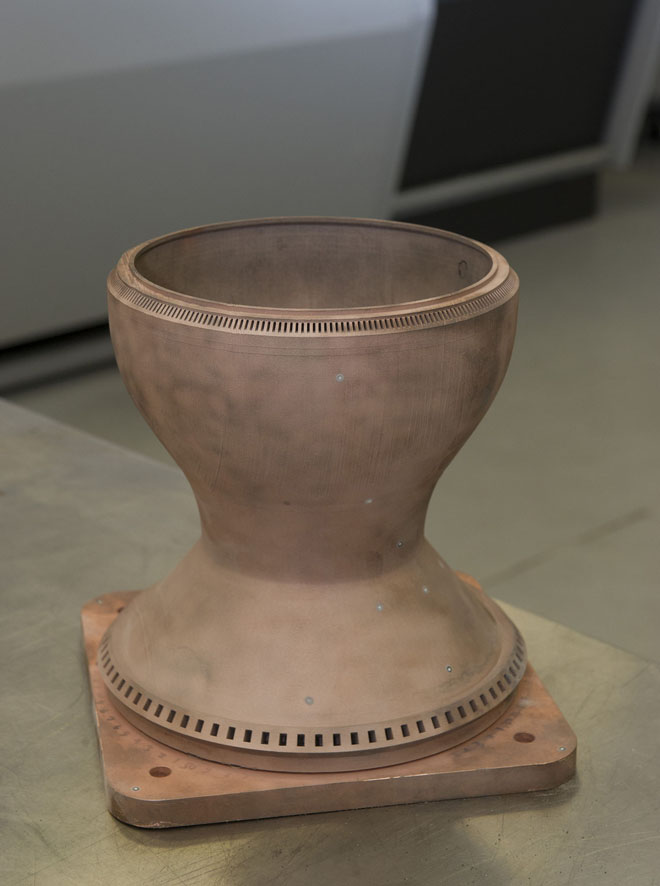 Our goal is to build rocket engine parts up to 10 times faster and reduce cost by more than 50 percent. We are not trying to just make and test one part. We are developing a repeatable process that industry can adopt to manufacture engine parts with advanced designs. The ultimate goal is to make building rocket engines more affordable for everyone.

There are more tests in store, however: the next step is for a “structural jacket” of nickel super-alloy to be sprayed onto the liner’s surface, prior to it finally being hot-fire tested at the Marshall Center to see how it will perform under extreme temperatures and pressures, during simulations that will replicate conditions inside an engine.

Additive manufacturing may not only change the space industry on the ground, but will also have a huge impact in orbit. Earlier in April, engineers at the Marshall Space Flight Center received a box of the first tools 3D printed in-space by a machine that was installed on the International Space Station (ISS) in November 2014.

The first of these, a ratchet wrench, was designed on Earth by 3D printing company Made In Space, Inc. The files were then electronically sent up into space so it could be printed by astronauts aboard the ISS. The company is currently collaborating with NASA to establish an additive manufacturing facility onboard the International Space Station. 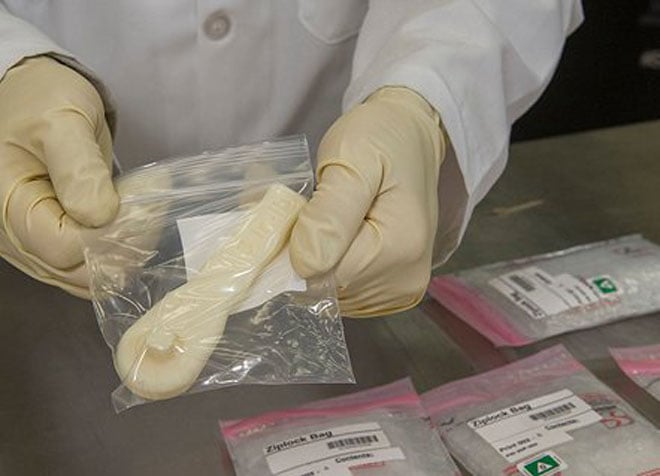 A total of 21 tools were printed from 14 designs, and were compared against controls that were previously printed with the same 3D printer, prior to it being sent up into space. The goal is to see how microgravity affects 3D printing, with project engineers subjecting both sets of printed items to durability, strength and structural tests using structured light scanning, electron microscopes and computerized tomography (CT) scans.

According to NASA spokesperson Tracy McMahan, this first round of tools are more for testing purposes and won’t actually be used in space. But the intention is to eventually allow astronauts to print replacement parts during space missions, without having to wait for the next supply mission to launch. With each six-month ISS expedition operating more than 200 science experiments simultaneously, the ability to quickly make any needed parts or tools would save time and money. Emergency repairs could be made much more smoothly. In addition, NASA is also considering the possibility of recycling printing materials as much as possible in-space so that new material does not have to be sent up (it apparently costs about US$10,000 to send one pound of equipment up into space). 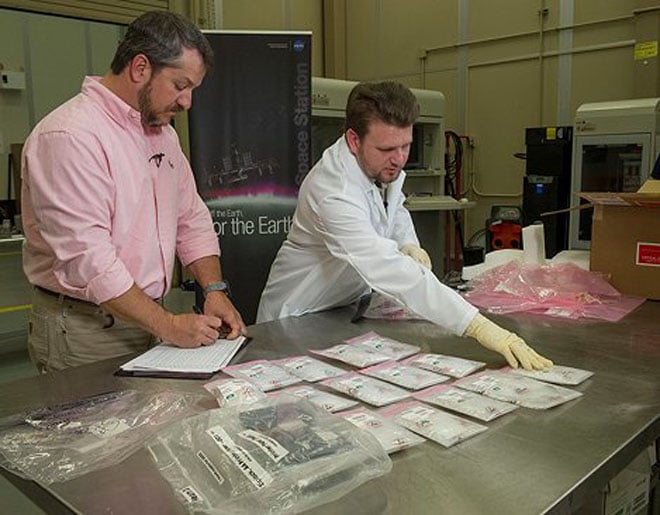 Printing Buildings on the Moon and Mars

Beyond the short-term practicalities of easily creating tools for space missions, additive manufacturing in the long-term could also someday be used to construct habitable buildings on the Moon and Mars. To this end, NASA has given funding to 3D printing proponents like University of Southern California professor Behrokh Khoshnevis, who is behind Contour Crafting, a project that is developing large-scale, portable printers that would quickly manufacture full-scale buildings from digital files — thus reducing cost, time and construction waste.

It’s apparent that the aerospace industry is benefitting enormously by integrating these new tools. Not only does 3D printing make design, development and production more cost-effective on the ground and up in space, it may even save lives and reduce the great risk that still comes with space flights. In any case, NASA’s relatively recent adoption of 3D printing is a clear signal that the additive manufacturing technology is maturing into more mainstream and important applications. With the integration of 3D printing into medicine, sustainable and affordable housing, product design and even food, it seems that NASA is but one of the many entities that are getting onboard the 3D printing revolution, adapting new technologies to expand the unique frontiers of space exploration.