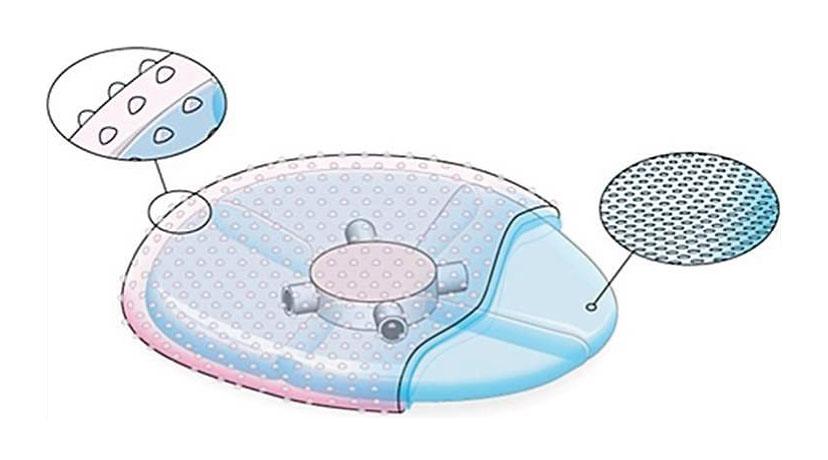 When we think of space exploration on distant planets or moons, we typically think of giant rockets, far-flung probes hurtling through space and multi-wheeled space rovers trundling along unknown terrain, collecting scientific samples and data. But the downside is that wheels tend to get stuck in treacherous environments that are too sandy, rendering a heavy, rover-on-wheels all but useless in such circumstances.

To tackle this very real problem, NASA’s Langley Research Center was recently awarded a patent in developing wheel-free, “amorphous surface robots” as alternatives. Inspired by amoebas and worms, these soft robots can slither, slide and roll over difficult landscapes, for improved exploration of hard-to-reach areas above and below ground.

As told by Motherboard, in NASA’s patent summary describes the advantage that these amorphous surface robots have over traditional rovers: “Once deployed on a surface, conventional rovers are typically propelled along a surface. In particularly sandy or loamy soil environments such as the lunar or Martian surfaces, conventional propulsion devices may become fouled and stuck. The presently disclosed robots change shape in the direction of intended travel to provide improved surface mobility along with enhanced protection from the elements.”

Now what, pray tell, does a robot based on an amoeba or worm look like and how will it work? The first of NASA’s proposed amorphous robots is the Bladder Bot, which appears like a disembodied sac designed to move when its high-viscosity liquid interior is shifted and circulated around an internal pump and valve system, thus propelling it forward. According to the summary, this blob-like robot could potentially have two versions: one that is more amoeba-like, or one that has rotating compartments of fluid. The scientists explain how this blobby bot would move, and it’s actually quite ingenious:

Another possible design is the so-called Inchworm Robot, featuring a long, tubular design, an actuator and a control unit. Taking its cues from inchworm movement, this robot is able to get around when its control unit is activated, energizing the actuator and the electromagnet that it is connected to, which in turn magnetizes the ferrofluid and lengthens the tube in the desired direction. When the control unit powers down, the ferrofluid is demagnetized, shortening the tube. The process  is repeated over and over, allowing the robot to move “in a manner similar to that of a worm which extends in a desired direction, grips the surface, and then pulls its trailing portion forward.”

Yet another proposal is the Electromagnetic Sphere Robot, which, like its name suggests, is made up of several electromagnetic globes inside a flexible, fluid-filled sac. When the polarity of the electromagnets is changed in a certain sequence, the balls displace internally, causing it to move in a certain direction.

The Polymer Cell Robot is also similar in concept, but uses a series of polymeric cells enveloped in a larger shell made of a flexible material. These inner cells can change size independently of one another, thus relocating the overall center of gravity and causing the whole robot to roll forward.

Besides not having any wheels, legs or joints where sand could accumulate, these robots would be completely self-contained and sealed from the outside environment, making them durable and adaptable to dusty environments. Since they also lack a rigidly defined and unchanging shape, they could be scaled up to any size. As the project website notes, these robots would also be useful in search-and-rescue operations following natural disasters here on Earth, as well more mundane tasks like pipeline or sewer system inspections.

While these formless machines seem quite removed from the conventional idea of what a robot looks like, it is actually part of a movement toward softer, “bio-inspired” robotics that takes concepts learned from nature, and applies them to real-world engineering problems. Similar to nature-inspired trends in disciplines like architecture and product design, this biomimicry of nature is leading to a new branch of study called soft robotics, where designs are paradoxically made to be durable by being pliable, rather than encased in metal. With the emergence of robots equipped with machine learning — and even potentially emotional intelligence — and now appearing in the form self-driving cars, helpful delivery robots and even collaborative, co-working robots, making them as soft as possible may help ease their transition into our daily lives.

More at NASA and USPTO.