NASA Engineers on How to Build a Death Star 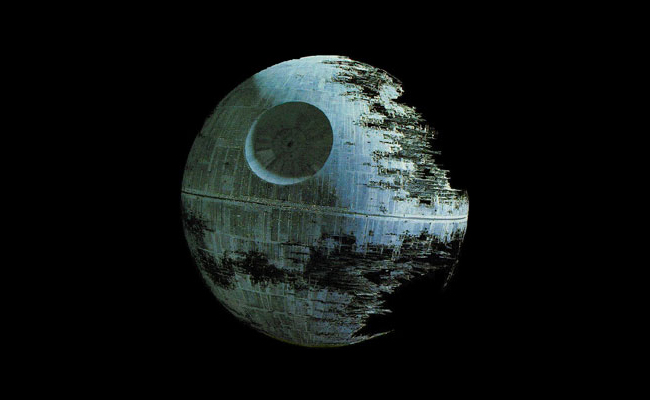 With “Star Wars: The Force Awakens” premiering this week, it’s nice to hear that real-world space engineers are fans of the Star Wars franchise, just like seemingly everybody else.

“I went to see the first “Star Wars“ movie in June of 1977,” says Brian Muirhead, the chief engineer at NASA’s Jet Propulsion Lab. “The thing that I still remember best is the opening sequence, where the Imperial-class Star Destroyer is moving across the screen. And my first thought was, ‘What society had the capability to build a machine of such grand size?’ If one wanted to build a Death Star, you didn’t build it by launching a bunch of stuff off of a planet. You went and got yourself an asteroid, and built it from that!”

Muirhead was one of two NASA engineers discussing Star Wars in a remarkable pair of videos shared last week by Wired. The videos compare the movie’s space technologies with NASA’s own real-world efforts to explore our own galaxy. And the second video even promises to teach future Darth Vaders “How to Build a Death Star…”

Not coincidentally, NASA is planning to capture an asteroid — or a least, a multi-ton boulder from the surface of an asteroid. By the end of the decade, NASA plans to pull one of these giant boulders into an orbit around the moon so they can land astronauts on its surface to collect samples and explore. NASA’s been working on it since 2013, and they’ve now identified more than 1,000 asteroids approaching close enough to earth, and four that actually seem like viable candidates.

“Scientists anticipate many more will be discovered over the next few years,” reads the project’s official web page, “and NASA will study their velocity, orbit, size and spin before deciding on the target asteroid for the Asteroid Redirect Mission.”

And in a delightful piece of film editing, Wired combines clips from the “Star Wars” movies with footage of NASA’s engineer discussing their real-world ambitions.

NASA Engineer: “On my Asteroid Redirect mission, we’re going to go land on an asteroid.”

NASA Engineer: “We’re going to go pick up a boulder from the surface, and put it in orbit around the moon…”

But NASA isn’t hiding from Imperial Star Destroyers. It is using the mission for “testing the capabilities needed for a crewed mission to the Red Planet in the 2030s.” Another page on NASA’s site explains how their asteroid mission will allow testing of “the largest and most advanced solar electric [ion] propulsion solar electric propulsion” — as well as radiation-resistant spacesuits and other cutting-edge, Mars-exploration technologies. It turns out that NASA’s JPL engineer also believes it’s the same propulsion technology that’s being used for the sublight spacecraft in “Star Wars.” And it’s a necessary technological development for exploring any galaxies that are far, far away…

Wired‘s second video asks a NASA roboticist what he thinks of the new BB-8 droid from “Star Wars: The Force Awakens.” “Looking at the BB-8 droid, I would have to say that the physics — it doesn’t follow particularly well,” responds Brett Kennedy, a roboticist at NASA’s Jet Propulsion Lab. “Trying to roll up and over anything is extremely difficult. If you only have one wheel, you’re sort of stuck, and if you don’t have enough height, the physics just doesn’t work out!”

Again, Wired splices in Star Wars footage, this one a chase sequence from the new movie’s trailer, and the NASA roboticist concedes that the flat desert landscape would be a suitable locale for a BB-8 droid. And more to the point, that the movie’s scurrying robot “looks cool!” But if you want to explore a planet’s rocky surface, these are not the droids you’re looking for. It’s a theme Kennedy returns to again at the end of the video.

“We’re often comparing what we do to C-3PO and R2-D2, and it’s in some ways unfair to both parties,” Kennedy said.

It’s interesting to hear a NASA roboticist announce that we already have the technology to build our own C-3PO or R2-D2 droids. In fact, Kennedy points out that the filmmakers actually had to delve into robotics just so they’d have something to film. But in the end, Kennedy returns the conversation to the wonders of the real world, first noting gently that NASA’s robots “are not story-telling tools, and they’re not characters.

Feature Image: “Death Star 2” by Screenshot from Return of the Jedi, via Wikipedia. All copyrights in regards to this image are held by LucasFilm Ltd. and/or its subsidiaries, and as such are the property of said company.

SHARE THIS STORY
RELATED STORIES
Java's James Gosling on Fame, Freedom, Failure Modes and Fun CES 2023: Robots, Astronauts, Schwarzenegger and Flying Cars Golden Paths Start with a Shift Left How Jit Builds a Platform Engineering Mindset in the Cloud Platform Engineering Won’t Kill the DevOps Star
SHARE THIS STORY
RELATED STORIES
Wellspring of Creativity: Why Public Domain Matters It Happened to Me: How I Suddenly Owed AWS $13,000... 2023 Will Be the Year FinOps Shifts Left Toward Engineering Why Your Code Sucks: Common Excuses for Bad Programming How to Get Started Filling 3.4 Million Cybersecurity Jobs
THE NEW STACK UPDATE A newsletter digest of the week’s most important stories & analyses.
The New stack does not sell your information or share it with unaffiliated third parties. By continuing, you agree to our Terms of Use and Privacy Policy.