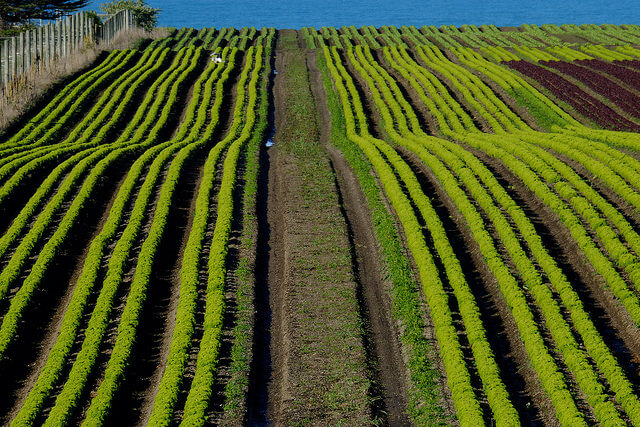 Nervana, in effect, is an AI-as-a-service company aimed at expanding deep learning beyond a few big companies and research institutions with the deep pockets and expertise to use it.

Blue River’s robots are used in the field for tasks such as thinning lettuce. It had developed a 3-D system for phenotyping corn plants that became flummoxed by things like weeds. It came to Nervana Systems to help improve its computer vision technology.

“It’s actually quite a hard problem from a computer vision standpoint, inherent with lighting conditions, things being in the way, dirt on the camera,” Nervana CEO Rao Naveen said of the use of computer vision in agriculture.

“Blue River operates a robot across hundreds of different fields. Incorporating Nervana’s Neon deep learning system into our pipeline allowed us in make use of the data that we’ve collected and increase reliability across all fields,” explained Lee Redden, Blue River co-founder, and chief technology officer.

“We hired Nervana to help implement a system helping our internal researchers get up to speed quickly with a working platform customized for our application. Our detection system had many known failure cases. Incorporating Nervana’s Neon into the system helped improve accuracy and overcome these failure cases.

Working with 812×612 pixel images, the Nervana team was able to pinpoint the single pixel where the corn plant’s stem met the ground to provide precision to the robotic tasks Blue River was trying to perform.

By automating precision thinning in lettuce fields, Blue River has been able to increase yields by ten percent, according to Naveen.

Naveen began his career as a computer engineer, received a Ph.D. in computational neuroscience, and worked in a neuromorphic design research group at Qualcomm before founding Nervana Systems in 2014. The company has raised $24.4 million.

“Our idea is that our tools make a data scientist more powerful. Instead of [the data scientist or developer] having to focus on building a set of tools for neural networks and optimizing those networks on infrastructure, we’ve actually done that part of it,” Naveen said.

“We have examples of industry-standard neural networks that have been done on our cloud, and users can use them, build on them and train them on our infrastructure without having to think about standing up a server and dealing with all the issues around the infrastructure.”

It’s focused on speed and ease of use for processing these brain-inspired algorithms.

“Finding inferences from very large datasets is very computationally intensive. It can take weeks or even months to train a neural network on a large dataset. So if you can go from one month to a couple of days, that’s a huge savings in developer time and frustration,” Naveen said.

While it uses Nvidia chips now, as does the rest of the industry, the company also is designing its own chips that it plans to boost its cloud performance by the beginning of next year.

“What we can do on the algorithmic side is largely hampered by what we can do on the hardware side. You see artifacts of that in every published neural network out there,” Naveen said. “There are certain size constraints, and that’s because of the hardware we have. So we decided to go as full-stack as possible, from the use cases – helping customers solve problems – all the way down to the silicon itself and how we can make the whole computational stack faster.”

A year ago, Nervana donated its deep learning framework, called Neon, to the Apache Software Foundation. Python-based Neon competes with the likes of Torch and Caffe, as well as Google’s TensorFlow, Nvidia’s cuDNN and Microsoft CNTK.

However, Nervana touts being more than ten times faster than any other cloud platform, based on benchmarks from Facebook and Baidu.

“By developing deep learning solutions that are faster, easier, and less expensive to use, Nervana is democratizing deep learning and fueling advances in medical diagnostics, image and speech recognition, genomics, agriculture, finance, and eventually across all industries,” Steve Jurvetson, partner at venture firm DFJ, said at the cloud launch.

Nervana Cloud is available either via public cloud or an on-­premise hybrid cloud solution.

Oil and gas software vendor Paradigm has used it to find more efficient sites for drilling based on detecting within 3-D images the underground features most likely to hold deposits worth extracting.

Nervana offers a library of models that developers can use as a starting point, based on neural networks used in different industries. They include examples in areas such as image analysis, such as ‘Is there an Irish setter in this image?’; image localization, ‘Find the Irish setter in this image’; video action classification, such as cutting to the relevant action in surveillance video; natural language processing, such as finding sentiments in text; and speech recognition.

Naveen says of the competitors:

“Google invested early and heavily in this space, so they really have a lot of the mindshare. Our advantage is that we’re building our own hardware that will give us an advantage over those that are all using the same hardware.

“We’re focused on enterprise. We believe that’s where the main use cases will be that drive this market forward. Google doesn’t do that so well. Enterprises need more than, ‘Here’s a bunch of tools that are open source, so go play with them.’ They need support, someone to call, they need someone to help them work through their problems. It’s a big part of our value proposition that we can do that.”

Susan Hall is the Sponsor Editor for The New Stack. Her job is to help sponsors attain the widest readership possible for their contributed content. She has written for The New Stack since its early days, as well as sites...
Read more from Susan Hall
SHARE THIS STORY
RELATED STORIES
Hardware Independence Is Critical to Innovation in Machine Learning AWS Inf2: A 12-Chip System for Large-Scale ML Production PyTorch Poisoned in Software Supply Chain Attack Op-Ed: The Rise of AI Content Generators Is an Affront to Creativity Data, Analytics and AI: What Will Happen in 2023
SHARE THIS STORY
RELATED STORIES
5 Ways ChatGPT Could Supercharge Chatbots Why Your Kubernetes Ship Is Sunk without Machine Learning AWS Inf2: A 12-Chip System for Large-Scale ML Production Generative AI: How Companies Are Using and Scaling AI Models Build a Churn Detection Train with AI Blueprints
THE NEW STACK UPDATE A newsletter digest of the week’s most important stories & analyses.
The New stack does not sell your information or share it with unaffiliated third parties. By continuing, you agree to our Terms of Use and Privacy Policy.