JFrog has launched a free edition of its JFrog Container Registry, labeling the release as “the most comprehensive and advanced Docker container registry available in the market.”
Nov 20th, 2019 7:26am by Jennifer Riggins 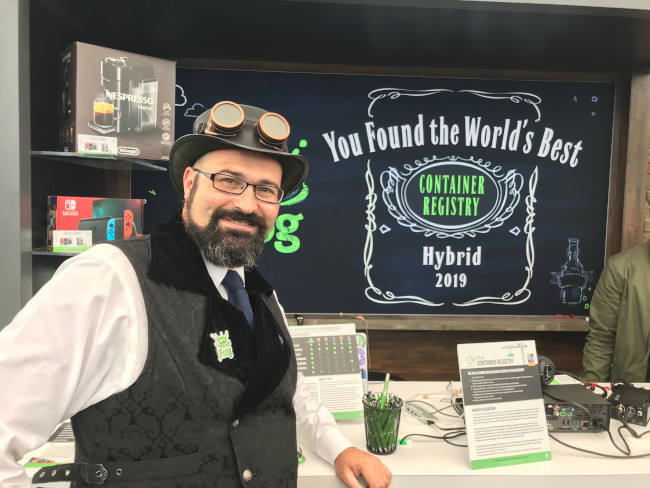 JFrog has launched a free edition of its JFrog Container Registry, touting the release as “the most comprehensive and advanced Docker container registry available in the market.”

This free container registry, launched at this year’s KubeCon+CloudNativeCon North America 2019, boasts many of the same features of the company’s premium product Artifactory, but with some limitations for capacity, said JFrog Head of Developer Relations Stephen Chin, in an interview with The New Stack.

“If you are a small dev team or prototyping and trying to build a new cloud-native application, you probably want something free, easy approachable. This gets you up and running until you are ready to have all your advanced features of the enterprise oﬀerings,” Chin said.

If you download the on-premises version, you can run this container repository for free, with as many repositories, images, and data transfers as you want.

Chin said JFrog is not trying to proﬁt oﬀ of this, calling the freemium part enough to get started for free and after it’s priced competitively. Its goal is simply to oﬀer a “pretty easy version of Artifactory to get started,” so teams prototyping new Docker DevOps workﬂows can use the same tooling as the rest of the company. The JFrog Container Registry then has a direct upgrade path to the enterprise oﬀering, making it easy to add it to the DevOps pipeline.

“We want to enable world class DevOps workﬂows for large enterprises where it’s manageable, maintainable, and secure. And we also want to make it easier for developers to get started with free and scalable technologies.” — Stephen Chin, JFrog

He continued that more than half of current JFrog users are actually on-premises. They get started and experiment with JFrog’s on-premise oﬀerings and then deploy it to their cloud platform of choice.

Chin oﬀers this as a big advantage of their container registry, working on multicloud and hybrid teams.

“Increasingly for companies being locked into one cloud vendor is unreliable from a cost and usability perspective.”

“This gives you a lot of ﬂexibility as a DevOps team to use the best infrastructure for the purpose,” he continued.

Continuing to talk about the distinguishing beneﬁts of this container repository, Chin said that JFrog oﬀers “on-the-ﬂy reclaiming of images,” while others make it very diﬃcult to delete images and impossible to reclaim that data.

The JFrog Container Repository also enables you to immediately get an overview of your Docker images already in production. Upon deployment, it pulls information from your Docker images, so you know what they contain, and it allows you to label and tag these images. In addition, you can synchronize images across multiple repositories.

IBM and Box are among the enterprises already managing huge container installations in their premium repository Artifactory.