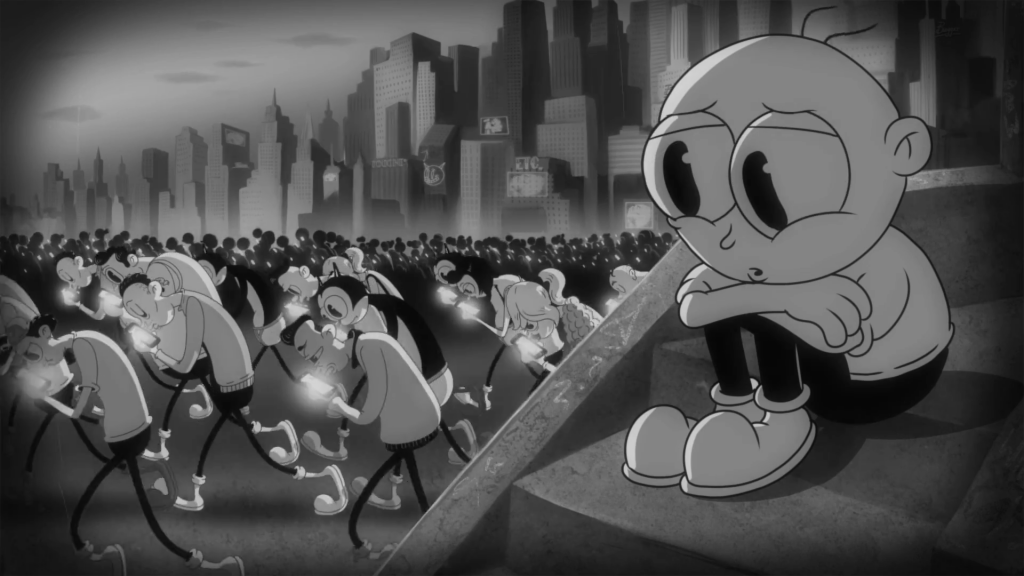 Moby has just released one of the most delightfully unsettling cartoons you may see this year. To promote his new album — “These Systems Are Failing” — the famous techno artist (and sometime DJ) created a music video offering a devastating critique of smartphones — and the society that obsesses over them. The song asks the musical question, “Are You Lost in the World Like Me?”

To collaborate on the effort, Moby secured the considerable talents of animator Steve Cutts, perhaps most recently known for his brilliant “LA-Z Rider” guest clip on The Simpsons.

And their video seems to argue that as we fixate on our cellphones, we’re losing our humanity.

It opens with a retro look, complete with a static-filled soundtrack and an old-timey title card — but the era it’s looking wistfully back to is … ours! Our hero appears to be a small, wide-eyed boy, surrounded by a swarm of cartoon humanity that’s teeming around skyscrapers that are filled with flashing billboards. Out in space, there are satellites, but they’re only there to beam messages back to that wide-eyed boy trapped in the crowd.

He sits sadly as lines of tall cartoon characters walk by, each one hunched over a cellphone. One by one, people drop into a manhole — each one identically transfixed by the cellphone in front of them — as the music delivers its dark warning to humankind.

Look hard, our city is gone.
Black days in the dying sun.
Dream a dream of god-lit air.
So many. You’ll find me there.

So look harder and you’ll find
Forty ways it leaves us blind.
I need a better place
to burn beside the light…

In scene after scene, the cartoon shows an entire population that’s become obsessed with their cellphones. A woman takes a selfie of herself in front of a burning building. A crowd of onlookers films police officers beating a man on the ground — without intervening. There’s a giant bully with a beer can accosting a woman on a subway. But all the people can do is yell at the little boy who’s bumping against their ankles. 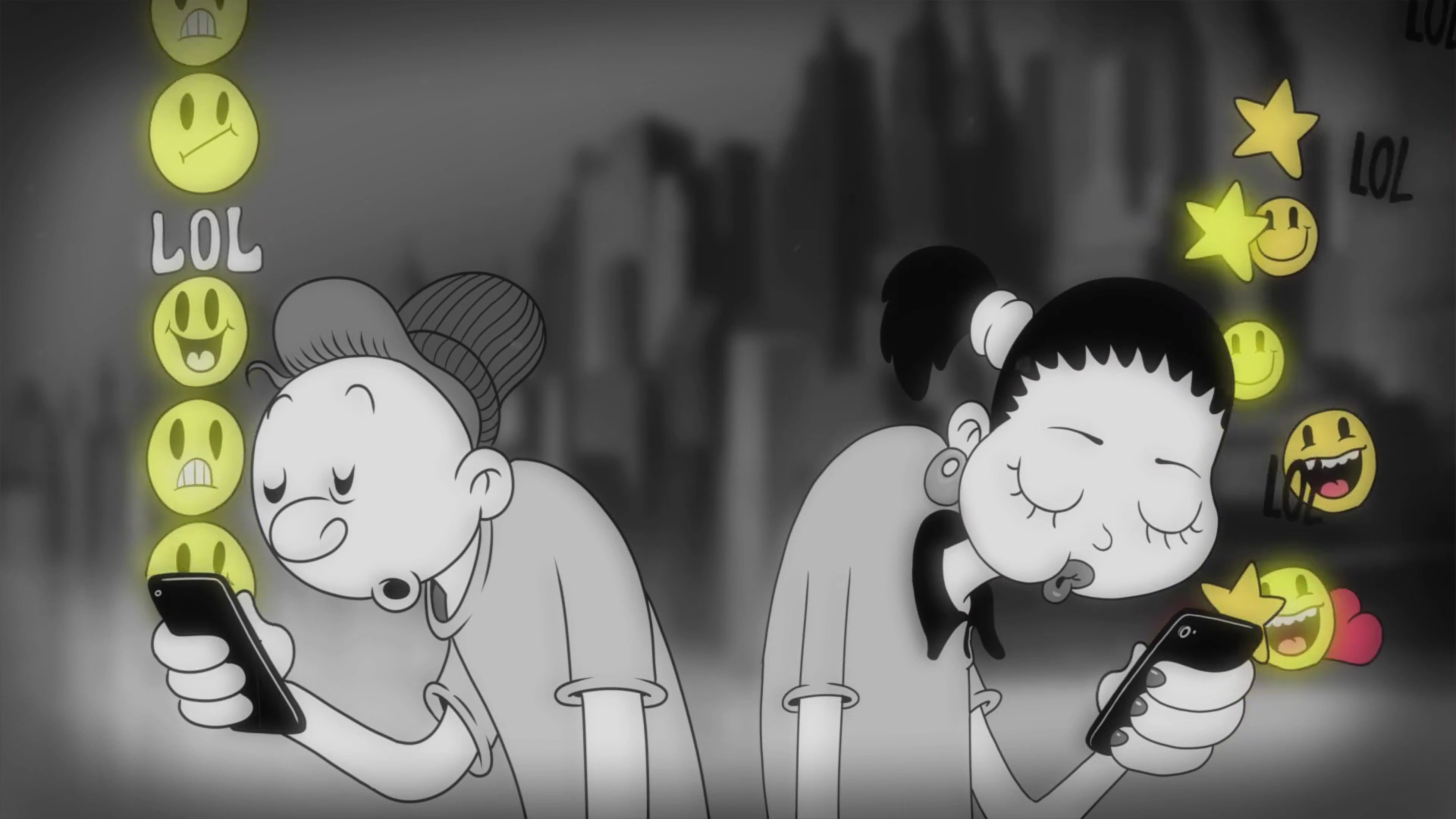 The cartoon takes some shots at other parts of our society. For example, there’s a large chunk of this cartoon population who is in jail. And there’s also a throng of people photographing their food in restaurants — oblivious to the frightened animals outside being shipped to a slaughterhouse.

Instead of swiping faces on Tinder, one woman actually swipes the man in front of her to turn him into a more attractive date. And there’s a throng of people transfixed by a Pokemon Go character — glimmering in a dimly-lit dump otherwise filled only with electronic waste. 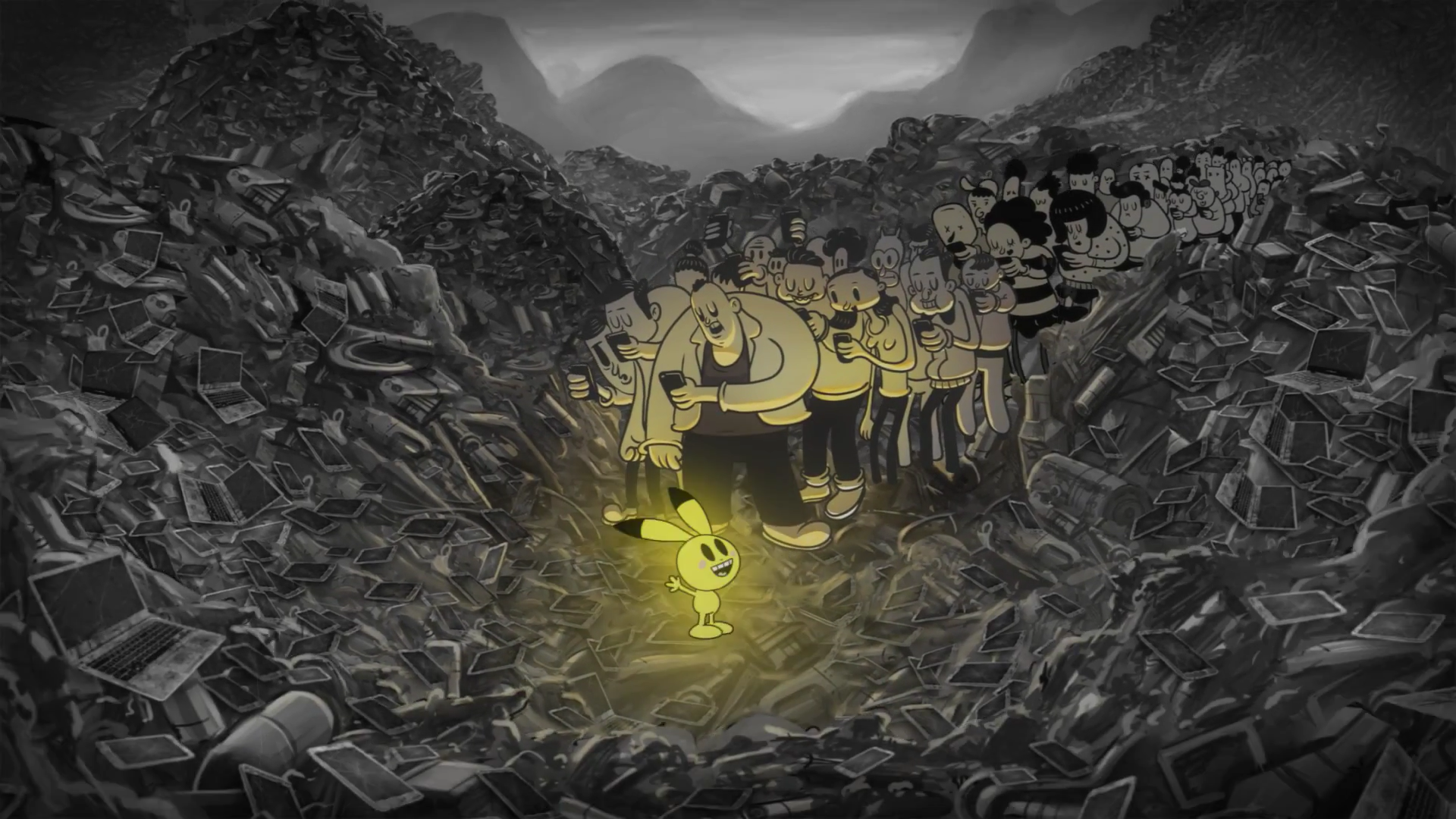 The song’s lyrics change subtly — now talking about “throwing knives at a dying sun” — as the video moves to its most disturbing vignette. A young girl dancing becomes an online photograph with the headline “OMG!! Girl dances badly at party! Fail Alert!!!” Later in the video, she ends up on a high ledge, contemplating suicide — as a crowd below raises their cellphones to film it. 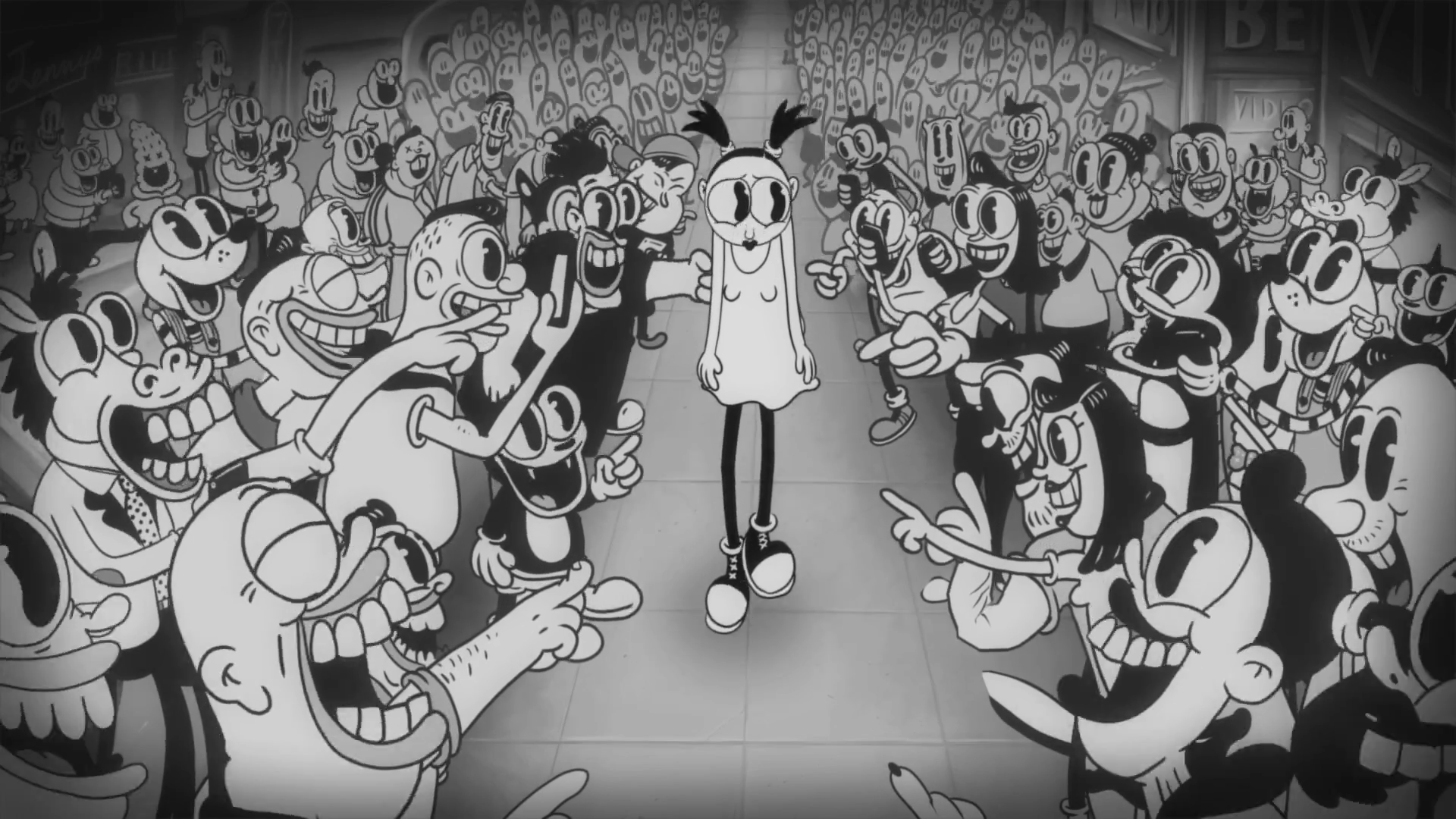 And the cartoon ends with the most disturbing image of all: Crowds of people with their backs to a beautiful sunset, walking obliviously over the edge of a cliff — each and every one of them, all while staring at their phones… 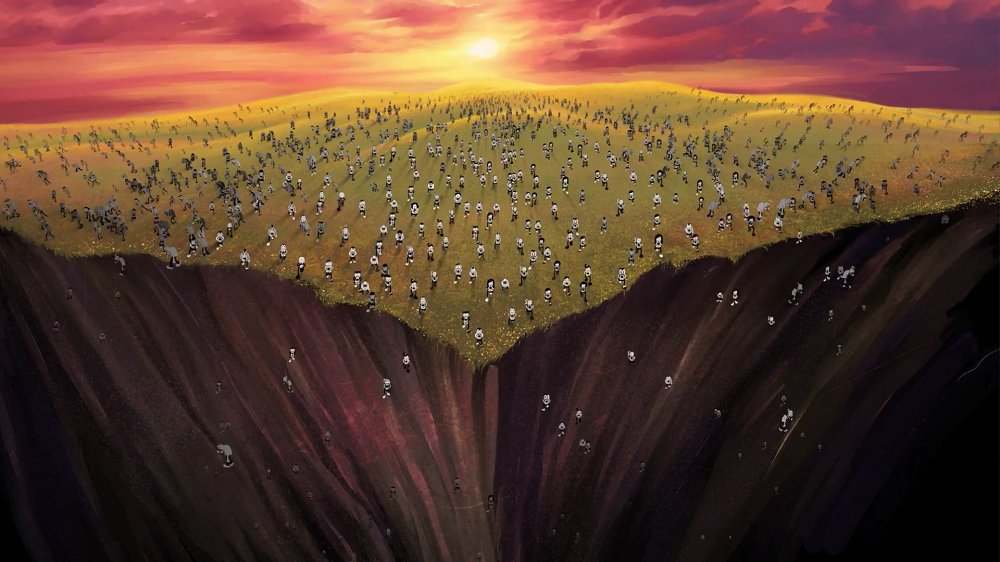 It’s a disturbingly effective satire, and it also carries an implicit criticism of our media-saturated society. Watch the cartoon closely, and you’ll see advertisements tucked into many of the shots — in fliers on a wall, on billboards outside restaurants — each one bearing pictures of consumer products like a bottle of ketchup or cereal. But no matter what the pictures show, the names of the products are always the same: “These Systems Are Failing.”

Moby has explored our obsession with entertainment before. The video for his song Natural Blues showed seniors in a nursing home — many of them in wheelchairs — all gathered around a TV set to watch a music video. (It won a “best video” award from MTV Europe Music). But judging from his latest video, 51-year-old Moby obviously still remembers a world without smartphones.

To deliver his latest message, Moby turned to London-based Steve Cutts, who seems to specialize in dystopian cartoons.

Cutts is probably best known as the man responsible for a stunning 90-second cartoon slipped into the opening of a Simpsons’ episode earlier this year. As Homer sits on the family’s couch — for the 585th time — a hidden elevator suddenly appears, and Homer emerges on the street as a 1980s action hero, ready to fight crime with his technology-enhanced LA-Z Rider couch vehicle, in a Miami Vice-style montage:

Cutts’ later told one interviewer that while he’d settled for a lighter touch, “I toyed with the idea of doing something darker in tone, with more social commentary, or even a comment on the nature and longevity of the show in general.”

In fact, Cutts’ first taste of online fame came from a three-minute cartoon called Man, which darkly depicted humanity’s indifference to animals and other natural resources. In less than four years, it’s been viewed nearly 20 million times. And it’s probably one of the reasons he was tapped to animate Moby’s video. What a perfect combination — Moby’s dystopian lyrics mixed with the cartoonist’s edgy satire. 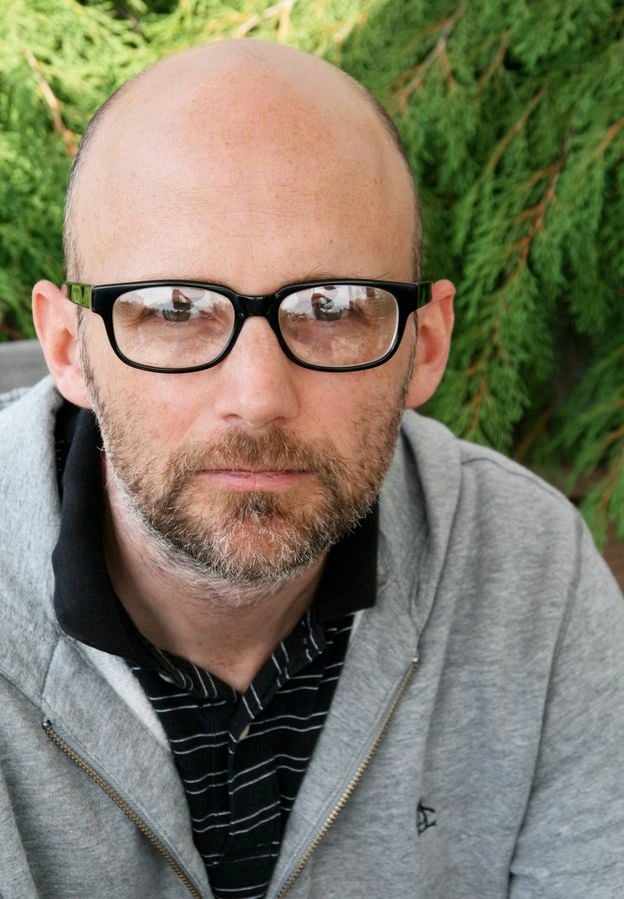 And Moby’s new project seems to be off to a good start. Just days after release, the album had already become Amazon’s #257 best-selling album — and #152 in its “Rock Music” category — and had already drawn at least one rave review from a fan on Amazon. “It does give a feeling of anger, disappointment, and expressionism, but with its overwhelming themes, uplifting choruses and catchy bass rhythms it has reminded me of why I have listened to Moby of the last 20+ years with great enjoyment.”

After watching the video’s ominous warning about our society’s need to recognize the soul-sucking power of our smartphones and their always-available entertainment, one YouTube viewer posted a comment with what may be the ultimate question.

“Who’s watching this on their phone?”

SHARE THIS STORY
RELATED STORIES
Platform Engineering Won’t Kill the DevOps Star Snack Stack: Turning Winter Comfort Food up to 11 Golden Paths Start with a Shift Left Why Your Code Sucks: Common Excuses for Bad Programming How We Manage Incident Response at Honeycomb
SHARE THIS STORY
RELATED STORIES
SRE Housekeeping: Where to Get Started for New Hires How to Get Started Filling 3.4 Million Cybersecurity Jobs Why Your Code Sucks: Common Excuses for Bad Programming A Brief DevOps History: The Road to CI/CD Linux Foundation Study Assesses 'Outsized' U.S. Influence on Open Source
THE NEW STACK UPDATE A newsletter digest of the week’s most important stories & analyses.
The New stack does not sell your information or share it with unaffiliated third parties. By continuing, you agree to our Terms of Use and Privacy Policy.