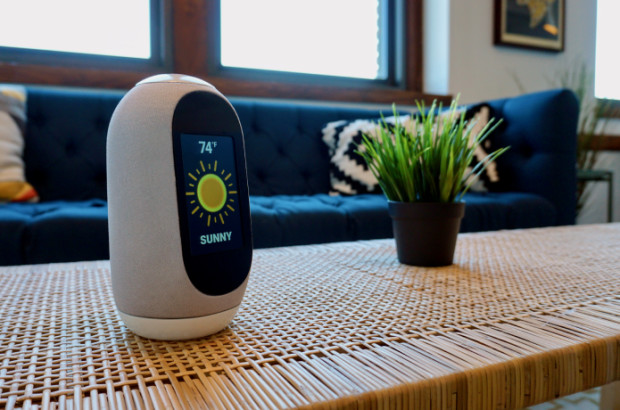 The Mycroft Mark II smart bills itself as “the open answer to Amazon Echo and Google Home,” one that offers the power of voice-driven commands “while maintaining privacy and data independence.”

It’s a smart speaker with the usual functionality — like playing music, giving weather forecasts, and delivering reminders. But it’s more customizable, offering different “wake words” — that is, different names to activate the device — and even different voices.

The Mycroft Mark II is being crowdfunded. Its original fundraising goal was $50,000, but by the time the campaign had closed last weekend, it had raised nearly eight times that amount, bringing in $394,572 from 2,245 backers. In fact, the project was already fully funded within seven hours of its launch on January 25th. To continue the availability of the smart speaker, it’s now available through a new crowdfunding campaign on IndieGoGo.

One user has already customized Mycroft to respond without any wake word. Instead, it recognizes whenever the user’s head turns towards a webcam.

There’s also different looks, from an animated face to on-screen widgets showing the time or weather. And the user community is even working on support for more languages, including Spanish, Portuguese, Italian, French, and German.

It’s a follow-up to an earlier crowdfunded product in 2015 — although Fast Company called the Mark I “more of a rough draft for hackers, built by hand from Raspberry Pi boards.” (Specifically, Raspberry Pi 2 and Arduino boards.) They learned a lot from that effort — and also grew a lot. “We went from a team of six to a team of seventeen,” explains their newest campaign, “and have now shipped the Mark I to 56 countries and 38 US states.”

The new Mycroft Mark II is the result of “non-stop iteration” based on feedback from current users, according to its Kickstarter campaign. “The Mark I was very much a device for makers and open source developers. The Mark II is a consumer-ready speaker designed for you and your family, whatever your level of technical expertise. But at the same time, it is open hardware and software for you developers, makers and hackers…”

One fan has already taught the new camera-enabled device to play Rock-paper-scissors.

But the biggest difference from its competitors is philosophical. “Your personal data stays private, you can customize your experience, and Mycroft is a neutral player in the voice game,” explained the recent crowdfunding campaign.

In a section titled “Open Source Wins,” the creators describe Mycroft as “The Switzerland of voice assistants; a neutral player in the tech ecosystem wars… we have no strategic reason to funnel users into any brand’s service.” And later their campaign calls it “the only voice assistant that respects your privacy… At Mycroft, we delete the recordings as they come in, unless you actively choose to share your data by opting into our open data set.”

Montgomery stressed the importance of privacy to Fast Company, suggesting that the way big tech companies handled user data was “full of self-enrichment at the expense of the user.”

In a recent blog post, Montgomery remembers one of his earlier projects — building a Wi-Fi mesh network accessible to everyone, regardless of income — and the big lesson he learned. “You don’t need to give Big Tech all of your private and personal data just to access great services. In fact, most of these companies can provide you with great service even without your personal data…”

“As voice assistant technologies like Mycroft become a bigger part of our lives I encourage you to think carefully about the data they are generating and how it is used.”

In a recent interview, the company’s chief technology officer pointed out that some users are more comfortable having these services delivered by a “local intelligence” than a cloud-based system. “[U]nderstanding my calendar and my current location at all times is a great way to predict when to raise the temperature of my house, but I don’t want to grant access to that much info to Amazon or Google.”

And while Fast Company notes that Mycroft has already attracted some alternate corporate investors — Jaguar Land Rover and the microphone company Shure — “The real money is in offering open-source AI to businesses, who might be even more wary about turning over audio logs and user data to tech giants.” 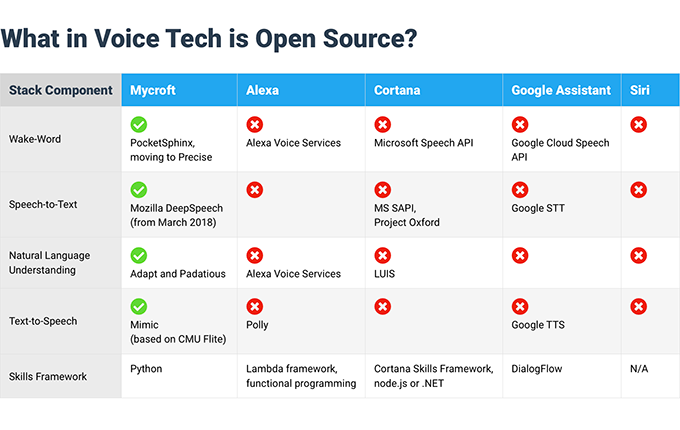 Montgomery also tells the magazine he’s in talks with several companies that want to create unique voice assistants that are based on their own brands.

The Next Great Open Source Interface?

Montgomery points out that the big tech companies are already pursuing voice as one of the major ways we’ll interact with computers in the years to come.

“There needs to be an open alternative,” he told one interviewer on YouTube, “so that everyone from a big conglomerate that’s shipping cars, all the way to a high school student with a STEM project can deploy a voice assistant that’s customized and does what they want it to do. That’s really our goal, is an AI that runs anywhere, interacts exactly like a person, and is accessible to anyone.”

Or, as their campaign explains, “AI and voice technology are too important to our collective future to remain the property of the Silicon Valley giants.”

That’s why the non-profit Mozilla Foundation has been assembling a public domain set of training data for voice assistants with their Common Voice Project — augmenting other publicly-available sets of training data from LibreSpeech and VoxForge. Mycroft hopes to contribute to the effort by giving its users the option of adding their own voice commands to the larger pool of open source training data.

“Together we grow stronger,” explains one Mycroft page, saying it offers the community a very unique opportunity: “helping to build this technology by building the data that shapes it.”

This could be more important than anyone realizes. “In the machine-learning world, the most precious thing is the right data to learn from,” Mycroft’s chief technology officer, Steve Penrod, explained recently. “And lots of it… Much like raising a child, the data you feed into the system shapes the output of the system. So careful curation can produce systems with opinions and personality… Joining together data sets will allow users to shape this assistant — unique voices, unique attitudes, unique interests.”

The campaign even sees the product as a step towards a more diverse future. “Building an AI that anyone can contribute to means making technology that is more representative of the world we live in today, a technology that is equitable, neutral, forward-thinking.”

And this will become even more important as AI assistants start to fill up our world. “They will become so pervasive that you won’t even notice them,” Pencroft told one interviewer.

“They’ll become part of the fabric of life.”