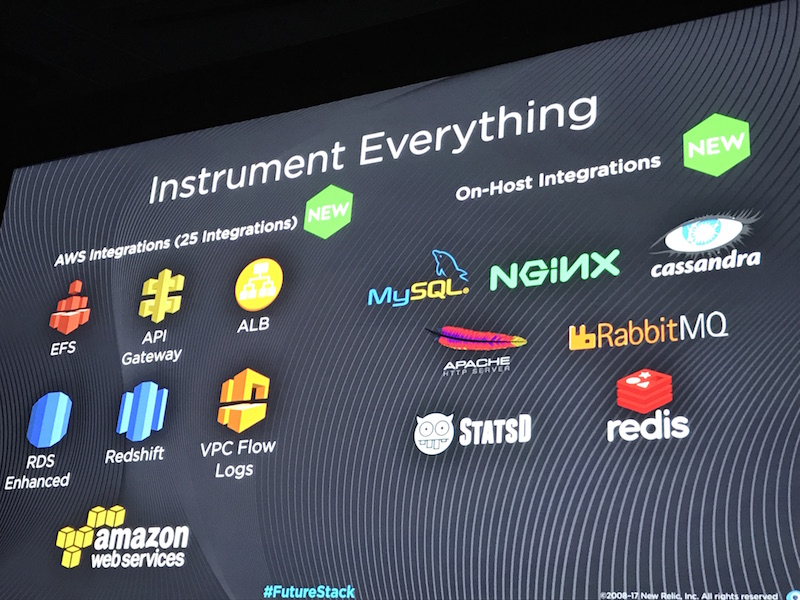 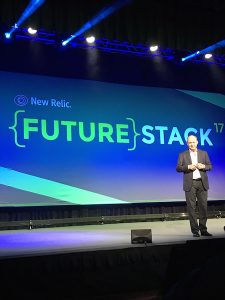 Lew Cirne, NewRelic CEO and founder, takes the stage for the FutureStack17 keynote in New York

Every business will survive based on how fast it moves, he said, laying out the three necessities for moving at such speed: Ubiquitous instrumentation, applied intelligence that lets you make sense of the firehose of data, and interconnectivity.

Instrumentation, which is modifying applications to be measured while in production, is no longer a luxury, it’s a necessity, he said in a media roundtable after the keynote.

New Relic customers are asking two basic questions. First, is my web portal open for business, then how can I tell what’s happening in my stack? Cirne said. Customers don’t come to us asking for us to build AI, they just want their system to solve problems for them. “We want everything to be instrumented and super easy for our customers,” he said.

Customers want to reduce the cost to find and fix problems, he said during the keynote. They want data to let them determine where to spend their time and resources. 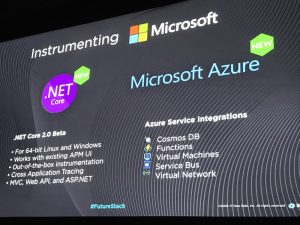 Cirne announced three major feature releases but snuck in a few other updates as well.

Many of the features unveiled this week are all built on New Relic Applied Intelligence (NRAI). In addition, New Relic is building platform-level services that will be able to deploy over and over, said Nadya Duke Boone, director of product management said in an interview. It’s going to show up in the browser, and mobile, and across your stack.

Other new features that made their debut during the keynote include Insights with Dashboard notes and cross-account dashboards, NRQL with Dynamic Baseline Alerting, and Radar, which includes APM Error Profiles. 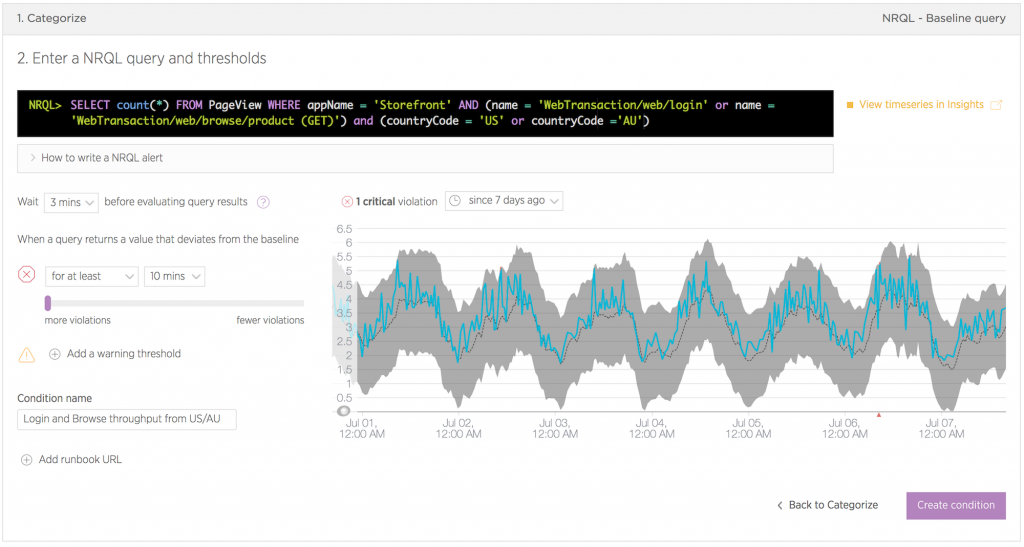 Insights, the new dashboard feature, includes the new ability to add notes, which got applause when it came up on the screen. It also includes cross-account dashboards, or company-wide dashboards allow large customers with multiple New Relic accounts to display data from all the accounts in one place. The dashboards are updated through a new API.

You can set your alerts to ping you if something is different than normal, she explained. “You can now say, ‘just show me if it is different from expected’ instead of having hard numbers which can be changed from Monday morning to Saturday night.”

This allows your system to be flexible and change with your business. Baselines will learn when changes happen and adapt. There is no need to change your alert parameters, she said. Set once and done.

And last but not least, Radar.

Radar, launched last year under the project name Seymour, sped ahead of other product releases due to customer demand. Radar tells you what you should be paying attention to, said Cirne.

Our customers want their system to solve problems for them, he said. They want applied intelligence and New Relic has massive amounts of data streaming through its system that could provide the basis for such smarts.

“We collect more data than anyone else by a factor scale,” said Cirne. At the roundtable, he showed us his phone, which has real-time updates on the amount of data streaming through New Relic. We watched as the number changed from 6.38 to 6.89. That’s a billion events per second.

The company is baking it into their entire platform so that it will be seamlessly integrated across all their platforms. One of the cool features is what they call internally “the Sesame Street problem” or “one of these things is not like the other.”

With the applied intelligence of Radar, New Relic engineers found they could find things that are not like the normal usage/flow/stuff and bubble it to the top and show you exactly what’s different. Which is, after all, what you want to be monitoring.

Radar gives you situational awareness, said Boone during the keynote. It looks behind you as well as ahead of you and gives you both perspective and advice. it constantly runs a set of analysis on your data, then provides recommendations based on who you are, how you interact with New Relic. Then Radar provides perspective at a ten thousand foot view, looking for trends you can get in front of. For example, you can see a web portal slowdown week over week. 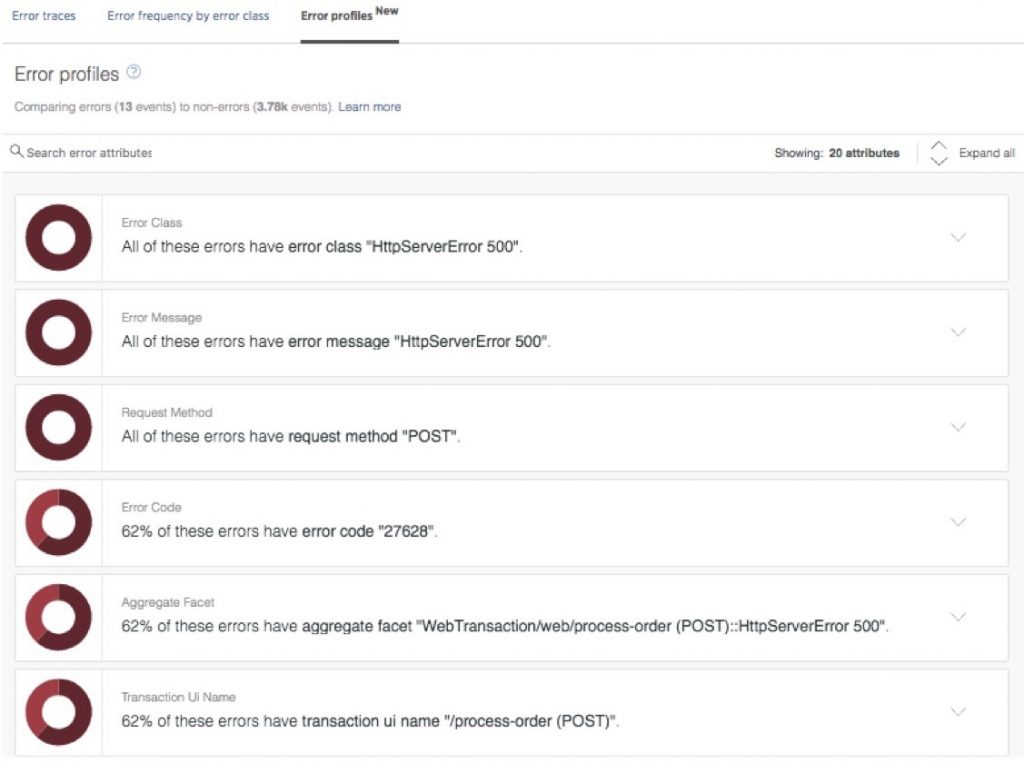 Boon said this service will be rolling it out to browser and mobile in the near future.

Foot on the Pedal

New Relic’s product road map is very customer driven, explained Greg Unrein, New Relic vice president of product. Decisions on what features to work on come directly from their customer community. On a high level, there is a Customer Advisory Board that works with closely with key customers to make sure the future of New Relic is going to be relevant.

In addition, each feature has what Unrein calls “Feature Advisory Boards,” who are focused on giving feedback on that individual feature. It’s these advisory boards and through the alpha and beta phases of feature products that determine which products are given the most attention and released sooner.

As New Relic increases its internal speed and rapid release of new products and features for its customers, they are finding a gap between release and adoption. This makes sense. Say you’re an SRE and have implemented NewRelic and the monitoring is giving you insights and driving your work day. How often do you have the time to go look for new features? And teach yourself how to use them? That’s where Lee Atcheson, evangelist, who comes to the job from the engineering side of the company, comes in.

His role as an evangelist is focused on bringing their current customers up to speed with all the new products being released.

“I can pretty much tell when each customer bought NewRelic by the products they are using,” he said. “And that’s not a good thing.” He acknowledged that once you get any product up and running, it’s hard to incorporate new features. He’s going to each FutureStack (next up, Sydney, then Berlin) talking to customers and helping them find new features that can augment their NewRelic experience. But things are happening fast.