Researchers at the University of Michigan have developed a technique that can 'print' things up to 100 faster than conventional 3D printing methods.
Feb 14th, 2019 5:00pm by Kimberley Mok 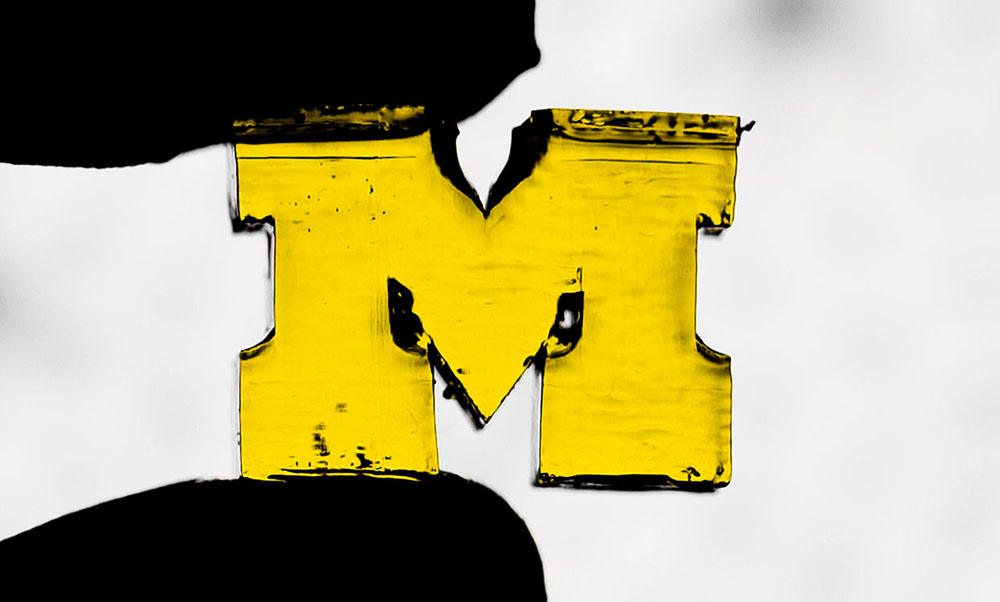 Additive manufacturing has revolutionized how we make complex things, whether that might be prosthetics, houses or even rocket engines. But there’s still room for innovation — after all, popular additive manufacturing techniques like 3D printing aren’t actually three-dimensional per se — most 3D printers are actually laying down two-dimensional layers, one after the other, in order to build up a three-dimensional object. Depending on the printer, the printer materials used and the size, the process can be very slow, sometimes taking many hours or even days to slowly print a complex object.

But instead of printing something with layers of plastic filament, researchers over at the University of Michigan have developed an innovative alternative: lifting complex forms out of a vat of liquid, resulting in a technique that can “print” things up to 100 faster than conventional printing methods. Such a step forward would prove useful and more cost-effective to those who want to manufacture lower volumes of products. Cranking out smaller batches of products isn’t well suited to traditional mass manufacturing systems, which are expensive to run, and are therefore more geared toward larger volumes in order to ensure that a production run is commercially viable. Watch up close how it works:

The team’s paper, published in Science Advances, describes their new approach, which involves using a proprietary mix of resin. When exposed to a particular kind of blue light, this resin hardens in a process called polymerization — or it can remain fluid where it isn’t touched by the blue light. Additionally, this special resin also won’t solidify when subjected to a specific wavelength of ultraviolet light.

The team’s printing set up includes a “build head” that holds the printed object as it draws itself up out of a bath of photo-sensitive resin that sits in a glass-bottomed vat. Beneath it is a light source from a modified PowerPoint projector that emits both blue light and UV light, the intensities of which can both be controlled. More blue light means more hardening, while more UV light translates to less hardening, eliminating the problem of the resin thickening too quickly and creating a mess. This approach allows users to print an object as rapidly as 2 meters (6.5 feet) per hour, with the bonus of being able to print topographical patterns by varying the intensity of the light source pixel-by-pixel.

“We use the [UV] wavelength to prevent the resin from polymerizing against the [glass] projection window,” explained paper co-author and University of Michigan associate professor of chemical engineering Timothy Scott. “But we can change the intensity of the inhibiting wavelength, that in turn can thicken up… the region that doesn’t polymerize. We can go to hundreds of microns comfortably, approaching or even exceeding a millimeter, so that’s getting quite thick. We can do that across not only the entire region of our bath, but we can do it selectively. By, again, patterning the intensity that we’re projecting into the vat.” 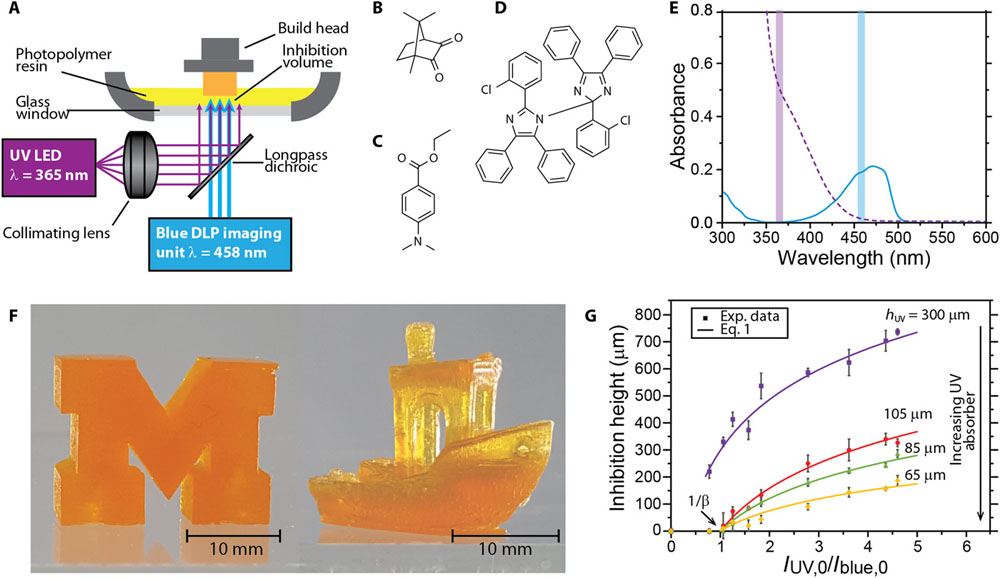 Using this method, the team was able to print objects like a lattice, a miniature boat and a block-lettered M relatively quickly. In addition, this new process produces smoother surfaces, compared to the rather bumpy result coming from printers that successively deposit two-dimensional layers of material to form a 3D object.

As the paper notes, the team’s new approach is inspired by existing stereolithographic 3D printing techniques, which involve using lasers to solidify the desired object out of a vat of resin. However, this new work adds an extra bit of innovation: the UV light that helps to inhibit the special resin from completely curing, making it possible to print much larger and more durable objects on a continuous basis. This novel use of dynamically controlled, multiple wavelengths of light in stereolithographic printing would potentially enable the mass printing of components that have “localized variation of material and chemical properties” — a rather neat feature that currently isn’t possible with conventional methods. For now, the team has applied for three patents for their work, and is refining the new method to use with not only resin, but other materials like ceramics and more.

SHARE THIS STORY
RELATED STORIES
Wellspring of Creativity: Why Public Domain Matters Platform Engineering Won’t Kill the DevOps Star Golden Paths Start with a Shift Left Entrepreneurship for Engineers: Avoiding Feature Bloat 2023 Will Be the Year FinOps Shifts Left Toward Engineering
SHARE THIS STORY
RELATED STORIES
How Will Working in Tech Change in 2023? 2022 in Review: AI, IT Armies, and Poems about Food How to Get Started Filling 3.4 Million Cybersecurity Jobs CES 2023: Robots, Astronauts, Schwarzenegger and Flying Cars How Jit Builds a Platform Engineering Mindset in the Cloud
THE NEW STACK UPDATE A newsletter digest of the week’s most important stories & analyses.
The New stack does not sell your information or share it with unaffiliated third parties. By continuing, you agree to our Terms of Use and Privacy Policy.