Nicolas Pitre: An Inspiration from the Linux World 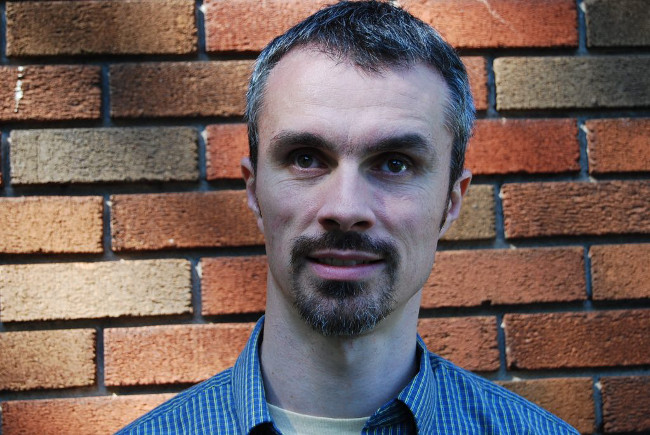 To a dedicated hacker, even a life event as potentially disruptive as the loss of vision can be dealt with through ingenuity and hard work.

Open source developer Nicolas Pitre was born with low vision. Initially, his sight was still good enough to let him do things like ride a bicycle in his childhood, or read, albeit slowly. He had to use assistive technology like cassette recordings of reading material and closed-circuit television systems with built-in magnification.

His sight was stable until the end of high school when it started deteriorating further. And by his second year of college, his sight had dropped so severely that he realized that he needed to learn braille ASAP. “I didn’t want to delay my university studies so I literally learned braille in two weeks while commuting. That’s when I replaced pen and paper with a laptop and a braille terminal,” said Pitre.

Since then, Pitre has heavily contributed to many Linux related projects. Currently, he is Senior Software Architect of the Linaro project.

He uses a braille terminal, which is a device with electro-mechanical character cells where each braille dot can be raised or lowered independently to form braille symbols.

It provides a line of 40 characters used as a single-line “window” that can be moved across the actual computer screen content. “This way I can read code and all its special characters, and figure out code indentation and layout,” he said. “However, not having learned braille as a kid, my reading speed is not very fast. So when there is a lot of text content I would use a speech synthesizer instead. In fact, I’m using both braille and speech simultaneously most of the time.”

Pitre holds a bachelor’s degree in computer engineering from École Polytechnique de Montréal. He has always enjoyed math and science, but even from a young age, he especially liked to tinker with anything consuming electricity, from battery toys to computers, especially computer internals. “I probably dismantled everything in the house to see how things worked and put them back together, a tendency I still have to this day,” said Pitre.

That tinkerer grew up to become part of one of the most vibrant open source communities around electronics,

His first job was for a company called VisuAide that specialized in high-tech products for visually impaired people. Despite being freshly out of school, he led the software design and development for a portable audiobook player using digital audio and hierarchical navigation functions for the first time in that field.

“I chose Linux as the operating system, and the hardware designers settled on the ARM architecture. That combination oriented my career path to this day.” he said.

Pitre has been working for Linaro since its creation in 2010. He is currently part of the Office of the CTO team where special projects and new avenues are being explored based on new areas of interest for the ARM architecture. He is investigating ways to leverage the Linux environment applied to very small and constrained embedded systems.

Before Linaro, he worked seven years for MontaVista Software and two years for Marvell Semiconductors, adding support for various ARM-based processors to the mainline kernel, and improving the Linux support on ARM in general.

During his university studies, Pitre also got involved in the student’s microcomputer club. That coincided with the emergence of Linux and the first Slackware releases. The club started promoting open source and Linux to the rest of the university population.

It is about the same time that Pitre installed Linux on his personal computer and have been using Linux non-stop since then. “Open Source really satisfied my natural desire to tinker with things, software and source code in this case,” said Pitre.

In addition to working on the Linux kernel which is the centerpiece of his career so far, Pitre has made significant contributions to a number of other open source projects.

Pitre made major contributions during the early days of Linus Torvalds’ git distributed version control system, the most significant being related to delta compression heuristics and access performance for the object storage model. He also worked on an ARM assembly implementation of the SHA1 hash code.

For the gcc Gnu Compiler Collection, Pitre made some random optimizations to the ARM code generation backend, as well as wrote a pure assembly soft-float library to perform floating point operations on ARM processors that lacked a hardware floating point unit and contributed it to GCC. Pitre admitted that some might call this work masochism but he really enjoyed doing it.

Pitre has also brought his expertise to advancing Linux accessibility. He contributed a lot to the early days of BRLTTY and acted as its maintainer for several years. BRLTTY is the software component that enables braille displays to be used natively with Linux. He also co-authored a text-to-speech engine for the French language called Cicero that converts text into phonemes to be consumed by a voice synthesizer.

“I’ve been relying on both BRLTTY and Cicero on a daily basis to do my work using Linux,” said Pitre.  Lastly, he contributes to a project for fellow blind tinkerers, the Talking Multimeter.

Besides his day job, every contribution he has made to various projects was for free. “It was done by necessity in some cases, but mainly for the challenges, the desire to solve problems and to find nice solutions to them.”

But Pitre is lucky in that he is one of those developers who gets paid to work on open source projects full time. “I think that source code should be open and freely accessible to all. There is always money to be made selling your expertise either as a full-time job or through contracting. The code itself is not all that valuable without paid experts with the ability to actually save time on deployment, configuration, customization, etc.”

Pitre reminds us that we should never let our limitations stop us from doing what we always want to do.

Swapnil is a journalist and writer who has been covering Linux & Open Source for 10 years. He is also a science fiction writer whose stories have been broadcast on Indian radio and published in leading Indian magazines.
Read more from Swapnil Bhartiya
SHARE THIS STORY
RELATED STORIES
Platform Engineering Won’t Kill the DevOps Star Golden Paths Start with a Shift Left The Power and Ethical Dilemma of AI Image Generation Models Why Your Code Sucks: Common Excuses for Bad Programming 2023 Will Be the Year FinOps Shifts Left Toward Engineering
SHARE THIS STORY
RELATED STORIES
Golden Paths Start with a Shift Left SRE Housekeeping: Where to Get Started for New Hires Why 'Explainable AI' Can Benefit Business How We Manage Incident Response at Honeycomb Java's James Gosling on Fame, Freedom, Failure Modes and Fun
THE NEW STACK UPDATE A newsletter digest of the week’s most important stories & analyses.
The New stack does not sell your information or share it with unaffiliated third parties. By continuing, you agree to our Terms of Use and Privacy Policy.