How Node.js Is Transforming Today’s Enterprises 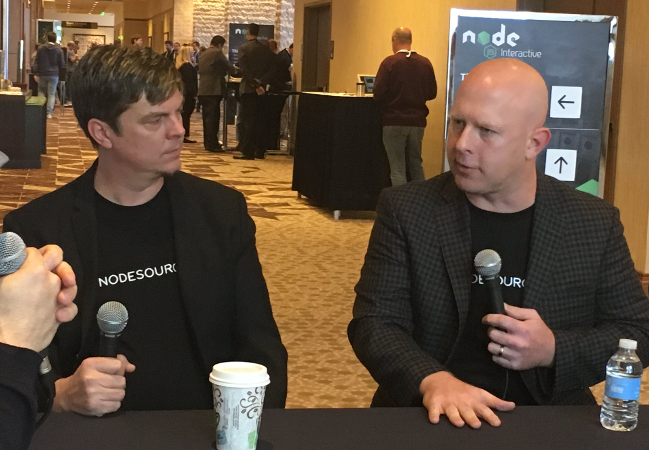 On today’s episode of The New Stack Makers, we sat down with NodeSource Solutions Architect Manager Joe Doyle and NodeSource Chief Technology Officer and co-founder Dan Shaw to hear more about how today’s enterprises are approaching working with Node.js. The interview was recorded at Node.js Interactive 2016, which took place in Austin, December 2016.

How Node.js is Transforming Today’s Enterprises

“There are two things happening. We need to move faster, and everyone’s become a tech company. Yes, Node in isolation is simple, but Node is being used as a tool to solve incredibly hard problems. In the enterprise, you have the blessing and the curse of your legacy that you value,” said Shaw.

Agile development practices and working at scale often go hand-in-hand, particularly when coupled with microservices. Doyle noted that when enterprises initially see the success of other businesses that have used Node within their own infrastructure, such as Netflix and PayPal, they often desire to adopt the same principles within their organization. “Let’s move fast, build new technology, and really grow, but at the same time, they have a history of using Java on this platform, or using this toolset for their .NET applications. The struggle they run into is, ‘Great. How do I introduce Node into those same platforms that I’ve been using for the last 10 years?’” said Doyle.

Shaw noted that companies getting started today often lack guidance in which direction to take their enterprise when using Node. Doyle highlights that while many other platforms within the ecosystem have supported open source mainly because of its openness, some the enterprises utilizing Node.js see the community and open source aspect as something of an afterthought when compared to using it to solve their corporation’s technology problems. “Node is the most popular tool for that, and you know, the draw isn’t Node because it’s open source, it’s Node because Node’s awesome, popular, and operates in the way I expect it to operate.”

NodeSource is a sponsor of The New Stack.