Companies should encourage its developers to spend part of the workday contributing to open source whether or not a project is managed internally by the company itself.
May 13th, 2020 8:59am by Lawrence E Hecht 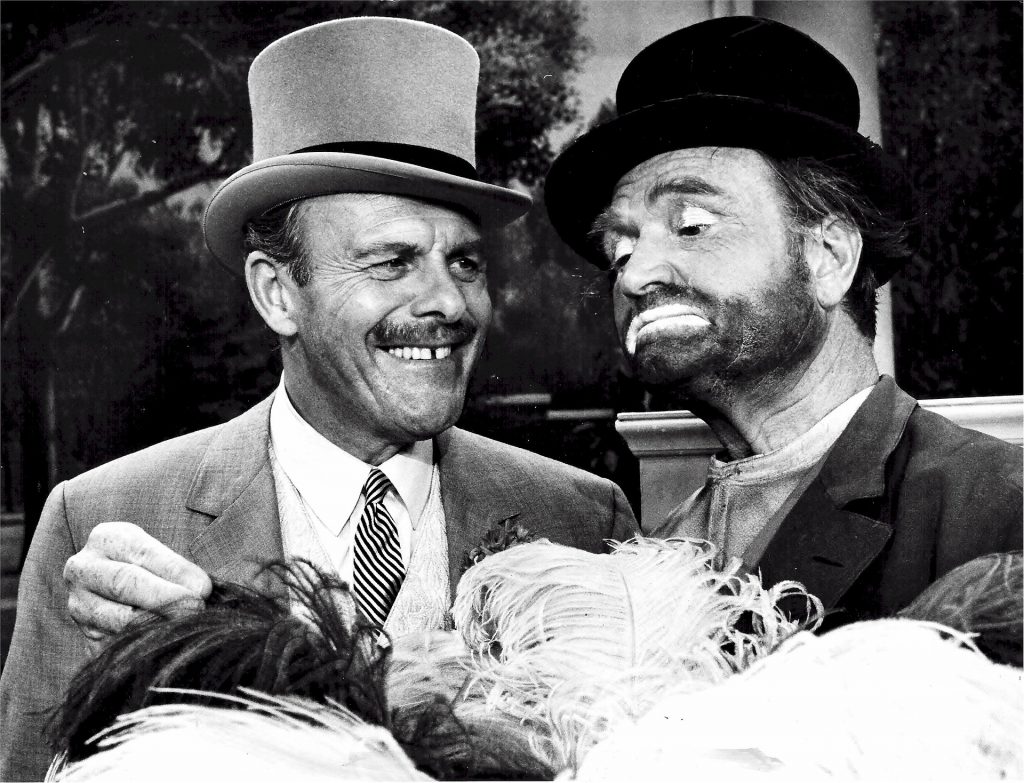 Does this mean companies should finance independent developers or have their own employees work on community projects? Believers in open source business models desperately want the former to be true. Yet, a more realistic goal is for companies to encourage their developers to spend part of the workday contributing to open source, whether or not a project is managed internally by the company itself.

Of the 17,000 developers surveyed, 59% contribute to open source software and 41% do not. Remarkably, two-thirds of the non-contributing developers still expect companies to support the open source movement to some degree. This is a reminder that many developers consume open source without actually giving back.

If you have opinions about the components of good open source corporate citizenship, please take our survey on open source in the enterprise. In partnership with The Linux Foundation’s TODO Group and co-sponsored by VMware, the third annual survey, which is open for responses right now, looks at the effectiveness of Open Source Program Offices (OSPOs) and policies that govern open software development. 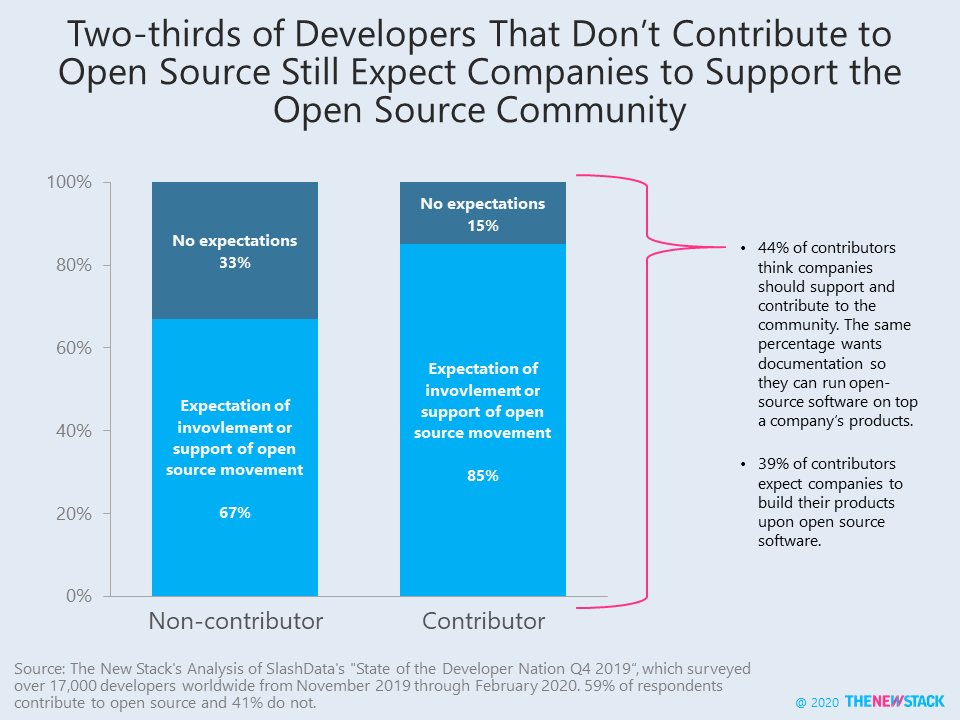 When asked why developers contribute, they offered a wide range of reasons, from skill development to resolving a bug or building a new feature onto an existing project. Only 3% say they are actually paid to contribute, although most contributions to the biggest cloud native projects come from tech company employees. 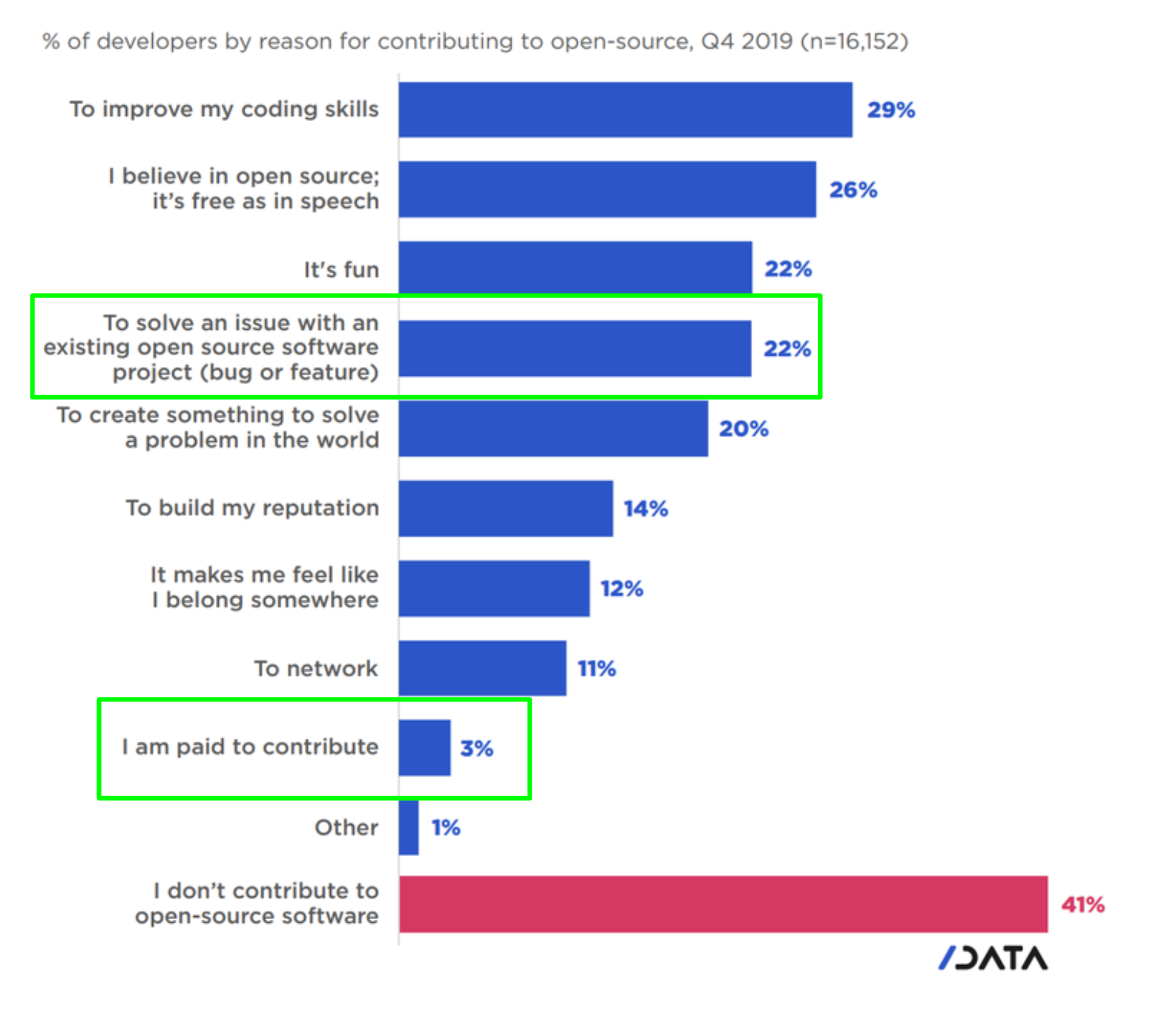 Feature image is a photo of comedians Terry Thomas and Red Skeleton via Pixabay.

Lawrence has generated actionable insights and reports about enterprise IT B2B markets and technology policy issues for almost 25 years. He regularly works with clients to develop and analyze studies about open source ecosystems. In addition to his consulting work,...
Read more from Lawrence E Hecht
SHARE THIS STORY
RELATED STORIES
How Boeing Uses Cloud Native How Donating Open Source Code Can Advance Your Career An Introduction to Apache Parquet Twitter Turmoil: We Need an Open Protocol for Public Discourse Create a Local Git Repository on Linux with the Help of SSH
SHARE THIS STORY
RELATED STORIES
The Quest for High-Quality Kubernetes Deployments eBay: Betting on Open Source Is Great for Your Business How Boeing Uses Cloud Native Twitter Turmoil: We Need an Open Protocol for Public Discourse CEO Raj Dutt Interview: The Grafana Experience Will Change
THE NEW STACK UPDATE A newsletter digest of the week’s most important stories & analyses.
The New stack does not sell your information or share it with unaffiliated third parties. By continuing, you agree to our Terms of Use and Privacy Policy.